9th March 2009 marked the start of the current bull market in US equities. Following the well-documented events leading up to the US sub-prime mortgage crisis and the near collapse of the entire global financial system, on 9 March 2009 all three main equity indices in the US – the S&P 500 (“S&P”), the Dow Jones Industrial Average (“DJIA”) and the Nasdaq 100 (“NASDAQ”) – reached their low and since then started an upward trend still active until today.

In financial circles, a bull market is a term used to describe a period when the value of a particular asset class (namely equities, bonds, commodities and property) or the performance of a certain economic sector goes through a cycle of rising value, optimism or expansion. In particular, a bull market in equities refers to a period during which share prices, in general, rise by 20% or more from their previous low. In contrast, a bear market is a period of widespread investor fear and pessimism during which the value of stock markets decline by 20% or more from their previous peak.

Naturally, it is impossible to determine one single factor which triggers the start of a bull market or the end of a bear market cycle. History suggests that it is the combination of a number of events that normally spark the beginning and end of such cycles.

Looking back, it may be argued that the current bull market has three main distinguishing features. During the past eight years, all three main US equity indices registered double-digit compound annual growth rates (“CAGR”). The tech-heavy NASDAQ performed best with a CAGR of over 22% per annum followed by the S&P (+17% p.a.) and the DJIA (+15.6% p.a.). In absolute terms, during this 8-year period, the NASDAQ rose by over 400% as the index surpassed 5,300 points from 1,043.87 points on 9 March 2009 whilst the S&P and the DJIA advanced by 250% and 220% respectively.

Furthermore, the gains in absolute terms of the S&P (the best index to gauge the wider US economy) ranks as the third highest out of all bull markets since the S&P’s inception in 1923. The 250% rally over the past 8 years is also the second sharpest gain since the index was expanded to 500 components in 1957. The strongest bull market occurred between December 1987 (nearly two months after “Black Monday”) and March 2000 (ahead of the burst of the “dot-com bubble”) as the S&P advanced by a spectacular 582% during this 12-year period. In this respect, the current bull market is the second longest on record followed by the bull market between June 1949 to August 1956 during which the S&P gained 267%.

The second characteristic that makes the current bull market in US equities particularly remarkable is its resilience to withstand a number of significant hurdles. Within the US, it is worth recalling the 2011 debt-ceiling crisis that steered the world’s foremost credit-rating agency – Standard & Poor’s – to strip America of its “AAA” rating for the first time in history (the current rating of “AA+” is still in force till today). Eventually, this was followed by a period of intense bi-partisan political manoeuvring in Congress to avoid an unwanted “fiscal cliff” in 2012 (the term coined by the former head of the Federal Reserve Ben Bernanke to describe a looming situation of notable government spending cuts and tax increases) and a sixteen-day federal government shutdown in 2013 – the third longest in US history.

Yet, the biggest challenge to Wall Street’s eight-year bull market came from across the Atlantic. In the EU, there was a relatively slow policy response to tackle the after-effects of the 2008/09 economic and financial crisis. Moreover, the rigid model on which the monetary union is structured and a European banking sector which was still undergoing considerable restructuring translated in a European-wide sovereign debt crisis. From late 2009 to 2012, five Eurozone countries (Greece, Portugal, Ireland, Spain and Cyprus) had to seek bailout assistance. In the meantime, the risk of contagion to other members of the Eurozone was so high that, on more than one occasion, the very existence of the single currency and the entire European project were called into question.

In the political arena, Russia’s annexation of Crimea in 2014 and the UK’s vote to leave the EU last year were other major events which could have derailed the progress of the current bull market. Moreover, equity markets also rallied despite the continuous threat of large-scale organised terrorism which, in the last two years alone, caused chaos in three capital cities right at the heart of Europe – Paris (twice in 2015), Brussels (March 2016) and Berlin (December 2016). Growing tensions in the Middle East and the surrounding regions (including the serious situation in Syria), the evolution of nuclear proliferation in the Korean peninsula and the outbreak of Ebola across West Africa and beyond in 2014 also contributed to periodic spikes of volatility in equity markets which posed serious challenges to the continuation of the current bull market. 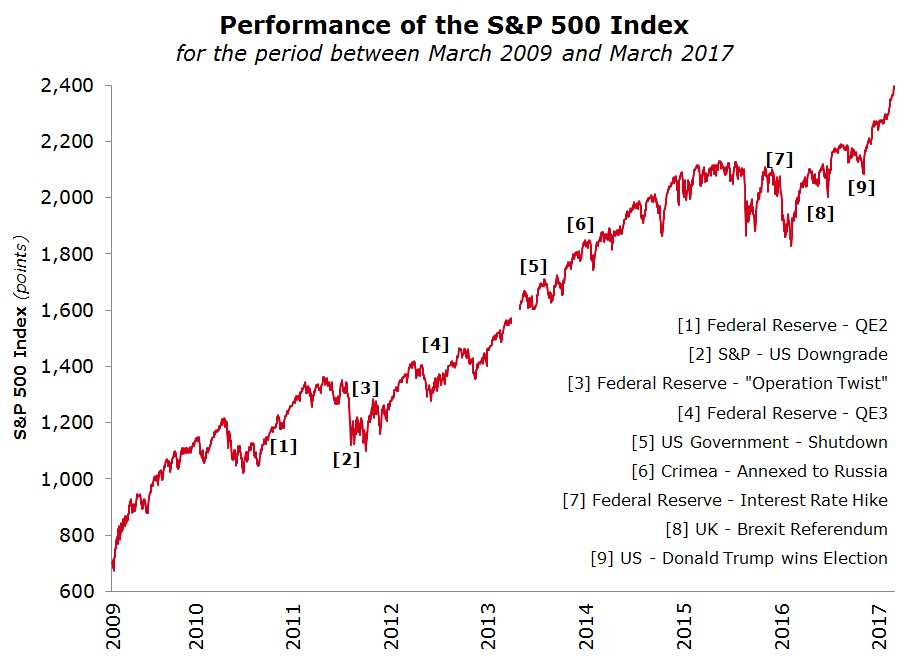 The bull market was also resilient to the substantial decline in the price of oil. Though many economists argue that a lower oil price is beneficial to economic growth as it frees up additional disposable income and strengthens the level of private consumption, on the other hand, it has a considerable impact on inflation while the sector as a whole contributes materially to the general level of macro-economic activity in the US. Furthermore, several other countries across the world are highly reliant on the oil sector (particularly emerging economies), which in turn impinges greatly on the general state of health of the world economy, the extent of capital flows and trade as well as currency fluctuations.

Against this backdrop, the determining factor that continuously led to a strong upward trend across equity markets was the unprecedented level of ultra-accommodative monetary policies and numerous stimulus programmes adopted by the world’s major central banks (the Federal Reserve, the European Central Bank, the Bank of England and the Bank of Japan) in order to revive economic growth and inflation following the  worst economic and financial recession since the Great Depression in 1929. Indeed, not only has this fact shaped the course of the bull market’s trajectory to-date, but also instilled a completely new world economic and financial order based on yet untested concepts. In this respect, it is worth highlighting the substantial drop in yields on income-generating financial instruments all over the world which completely altered the way in which the risk-reward trade-off in investments is evaluated. Meanwhile, the life-style of all those people who, like pensioners, are mostly dependent on income derived from their savings had to change to a new reality which, just a few years back, was simply unimaginable.

The most recent phase of the current bull market has been truly remarkable. Against all previous projections, the surprising victory of Donald Trump over Hillary Clinton in the US Presidential election held on 8 November 2016 sparked an incredible rally in equities as investors started to speculate on the new administration’s policy of boosting economic growth mainly through fiscal measures like higher spending on infrastructure and the military, looser financial regulations and cuts in corporate taxes. Indeed, in less than four months, the S&P and the NASDAQ gained 11% whilst the DJIA climbed by 14%. All three indices recorded new all-time highs. In particular, the DJIA closed in positive territory for twelve consecutive trading sessions between 9 and 27 February 2017, matching its longest streak ever set in January 1987. On 1 March 2017, it even breached the 21,000 mark – just five weeks after surpassing the 20,000 level on 25 January 2017.

The way in which the current bull market made history and exceeded levels previously regarded as extremely difficult to reach brings to the fore the question of the sustainability of such a strong upward movement. Many financial analysts argue that a correction is now long overdue. This is even confirmed by some interesting statistics which show that, on average, a bear market occurs approximately every 3.8 years. Whether the current bull market still has life to live or not is impossible to say. One thing however seems to be for certain - that the new financial and economic environment following the 2008 recession may indeed represent a new era for capital markets.