The revised Listing Policies dated 5 March 2013 stipulate that companies which approach the local capital market with a bond offering need to publish a Financial Analysis Summary (FAS) together with the prospectus. Following the issuance of their publicly listed debt instruments, the FAS has to be updated each year within two months from the publication of their annual financial results. Since the majority of companies have a December year-end, the cut-off date for the publication of the majority of Financial Analysis Summaries is the end of June – i.e. two months following the maximum period of four months allowed for the issuance of the annual financial results.

There are only three instances where companies are exempt from publishing an FAS These are: (i) where the issuer is subject to capital requirements as laid down in the EU Capital Requirements Directive or the EU Solvency II Directive (namely banks and insurance companies); (ii) where the bond issue has a recognised credit rating that is regulated in terms of the EU Regulation on Credit Rating Agencies; and (iii) where the minimum subscription amount and subsequent minimum holding of the bonds is at least €50,000.

The objective of an FAS is that of assisting a retail investor to obtain a better understanding of the financial strength and credit worthiness of an issuer and, in the case where the bond is guaranteed by another entity, of the guarantor of the bonds. When bonds are guaranteed, it is very important for investors to gauge the strength of the guarantor other than the issuer which is generally a finance vehicle which onlends funds to the guarantor.

The publication of an FAS on an annual basis is not only important from the investor’s perspective but also from an issuer perspective. In our article published on 26 May, we made reference to the importance of good investor relations as this enables market participants to make better informed judgments when investing, thus enhancing trading activity and liquidity in the market. Additionally, a satisfactory level of liquidity in a particular financial instrument (whether bond or equity) is also beneficial to the issuing company itself as this encourages potential investors to assess such an instrument more favourably when it comes to choosing between a number of similar investments.

With reference to the number of FAS’s published recently, three of these bond issuers are mainly dependent on the fortunes of the local tourism industry. These are: AX Investments plc (with the guarantor of its bonds being AX Holdings Limited), Island Hotels Group Holdings plc (IHG) and Tumas Investments plc (which is the finance company of Spinola Development Company Limited [SDC] – the guarantor of its bonds). Apart from these three issuers, two other tourism-oriented companies which have their debt listed on the Malta Stock Exchange and which also publish an FAS on an annual basis are International Hotel Investments plc and Corinthia Finance plc. The latter is the finance arm of Corinthia Palace Hotel Company Limited which is also the parent company of IHI – both are owners and operators of various hotels and other real-estate assets spread across a number of  jurisdictions apart from Malta.

Another company which is largely dependent on the local tourism industry is Eden Leisure Group Limited which acts as the guarantor of the bonds issued by Eden Finance plc. However, in this case, the issuer is not required to publish an FAS on a yearly basis as its bonds were offered to the public prior to the introduction of the revised Listing Policies in March 2013.

Given the current buoyant conditions across the local tourism industry, it would be interesting to analyse whether this is also being reflected in improving profitability levels across the companies which mainly operate in this particular segment of the local economy.

At first glance, it seems that the AX Group, Island Hotels Group, Tumas and Eden Leisure Group benefitted greatly from the prevailing favourable local tourism environment in 2015. Indeed, they all reported higher levels of revenues and double-digit growth in their respective pre-tax profits. In this respect, IHG posted the highest growth in profitability in 2015 as its pre-tax profits surged by 85% when compared to the previous year. However, this was due to the fact that the 2015 financial statements of the IHG Group were for a 14-month period as a result of the decision to change the financial year-end from October to December following the takeover by International Hotel Investments plc. More importantly, the results of Island Hotels Group were boosted by a one-time recognition of investment income amounting to €5.0 million related to the entire acquisition of Buttigieg Holdings Limited (the owner of the Costa Coffee franchise in Malta and in the East Coast territory of Spain, the Balearic Islands and the Canary Islands) and The Heavenly Collection Limited (the owner of the parcel of land situated near the Golden Sands Radisson Blu Resort & Spa).

When comparing the EBITDA line item, the strongest increase was registered by the AX Group with a rise of 36%. SDC and Eden Leisure Group also reported improved EBITDA, albeit by a more modest 6% and 4% respectively. Meanwhile, the EBITDA figure of Island Hotels Group declined by 8% as the increase in other operating costs outweighed the gains registered in gross profit. Revenues generated by IHG during 2015 surged by 54% namely as a result of the effect of the 14-month reporting period as well as the consolidation, for the first time, of the results of Buttigieg Holdings Limited as from 10 June 2015. On the other hand, revenues generated by IHG in 2015 were negatively impacted by the temporary closure of the Radisson Blu Resort St Julian’s between November 2014 and March 2015 due to a refurbishment undertaken at the hotel. 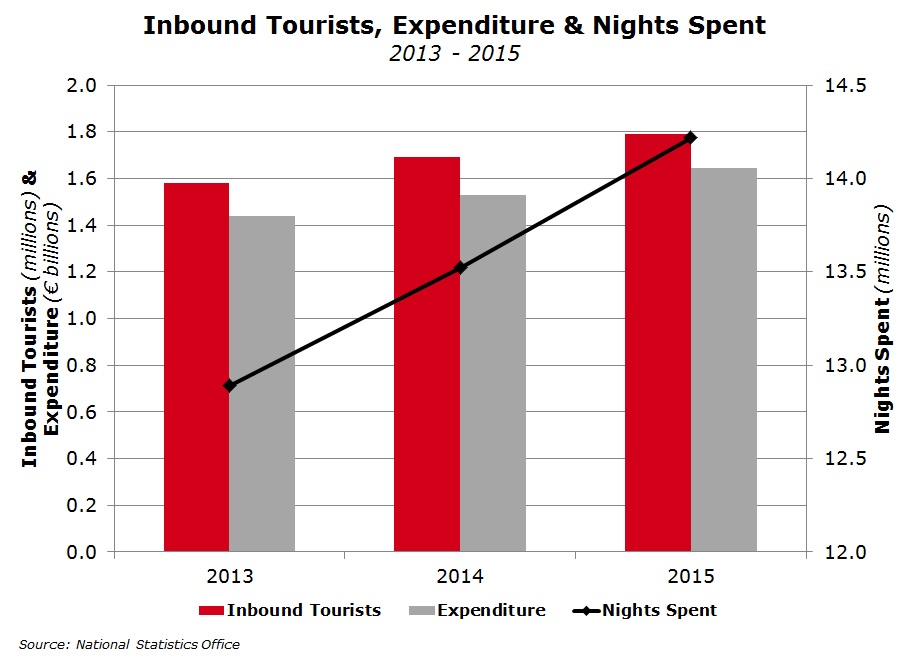 Another noteworthy point to mention is the fact that, excluding the effects from any revaluation of investment property recognised through the income statement, both AX Group and SDC managed to post their best pre-tax profits ever in 2015. Furthermore, the actual results of SDC exceeded its projections by 64% on a pre-tax basis due to the much better-than-expected performance of the Hilton Malta hotel in 2015.

Apart from the above, there seems to have been a general upward trend in revenue per available room (RevPAR) in 2015, largely due to an uplift in hotel room rates and in some cases coupled with an increase in occupancy.

Since an FAS also provides current year projections (in this case 2016), apart from a review of the historic financial performance, it would be equally important to examine the outlook for local hotel operators. In this case, since no FAS is required to be published by Eden Leisure Group, the 2016 projections are not available for this particular bond issuer.

The recent FAS’s published by AX Investments plc, IHG and Tumas Investments plc show that all three companies are expected to report a decline in pre-tax profitability during 2016 for various reasons. In the case of AX Group, whilst EBITDA is expected to climb by a further 11% following the 36% surge in 2015, pre-tax profits are anticipated to decline by 35% as the Group is forecasting a higher level of depreciation (+11%) and net finance costs (+8%) following its most recent investments – i.e. the refurbishments to the Victoria Hotel and the Seashells Resort at Suncrest, as well as the completion of the Hilltop Gardens Care Home & Residences. Additionally, the 2015 financial results of AX Group were boosted by a one-time investment income of €2.0 million resulting from the sale of investments which is not expected be repeated in 2016.

Similarly, whilst IHG’s EBITDA is expected to nearly double in 2016 to €4.6 million, pre-tax profitability is expected to suffer when compared to the financial year ended 2015 mainly as a result of the one-time investment income recognised in 2015 which will not be repeated in 2016.

In contrast, SDC is expecting to generate a lower level of EBITDA in 2016 as a result of the ten-week period in the early part of the year when the Hilton Malta hotel was completely shut-down in order to undergo an extensive refurbishment. As a result, pre-tax profits are expected to drop by 37% to €4.9 million. Despite this setback, the interest cover and the gearing ratio of SDC (the two most widely-used financial indicators for fixed income securities) are set to remain strong in 2016. In fact, SDC’s interest cover for 2016 is projected at 3.9 times from 4.6 times in 2015. Furthermore, the gearing ratio, calculated as the net debt divided by net debt plus equity (in this case also taking into consideration the fair value adjusted equity), is expected to increase to 39% from 32% in 2015 following the additional debt taken by the company for the refurbishment of the Hilton Malta hotel.

Likewise, the projected interest cover and gearing ratio of AX Group are also considered to be healthy. The interest cover in 2016 is projected to remain unchanged at 2.9 times whilst its gearing level should read marginally below the 40% level. In contrast, IHG is projecting that its interest cover will be 1.3 times in 2016 compared to 0.6 times in 2015 although this excludes the contribution from the 50% stake in the Radisson Golden Sands. Furthermore, the company’s gearing ratio is projected at 52% in 2016 which effectively means that the level of net debt (total debt less cash and cash equivalents) of the company represents just over half of its funding sources.

In the wake of the result of the UK’s consultative referendum on EU membership held on 23 June, it is a well known fact that the success of the tourism sector and its multiplier effect on Malta’s broader economy is largely dependent on the UK market since circa 30% of total inbound tourists, nights spent and tourist expenditure in 2015 came directly from the UK.

Against this backdrop, it would be of particular interest to see whether the forecasts provided by these companies will actually be met during 2016. More importantly, these companies ought to keep the local capital market abreast on the possible impact from the decline in the value of the pound sterling on the sector in the months and years ahead in order to assist the local investing community when contemplating investment options.