Following last week’s round-up of the Maltese equity market, a review of the bond market in 2016 is also warranted.

Conventional finance theory states that investors are generally more exposed to volatility when investing in shares as opposed to bonds. Well, this theory did not hold again in 2016 as the movement in Malta Government Stock (MGS) prices was truly extraordinary for the second consecutive year. It would not be unfair to say that the prices of MGS behaved similar to equities once again.

As I explained in various articles over recent months, the MGS market is very much driven by international developments. As such, a brief explanation on the backdrop to the start of 2016 would be appropriate.

In early 2016, one of the key themes mentioned by international financial analysts was the likely monetary policy divergence between the European Central Bank (ECB) and the US Federal Reserve.

In fact, in my article on 24 December 2015, I had explained how, at that time, bond markets were largely expecting three or even four interest rate hikes of 25 basis points each by the US Federal Reserve during 2016 while the ECB was expected to either maintain or extend its ultra-accommodative stance in order to assist with the continued fragile economic recovery of the euro zone economy and counter deflationary pressures.

However, the actions of both the Federal Reserve and the ECB during the course of 2016 differed from earlier predictions with unexpected movements and remarkable volatility in bond markets as well as in currencies. 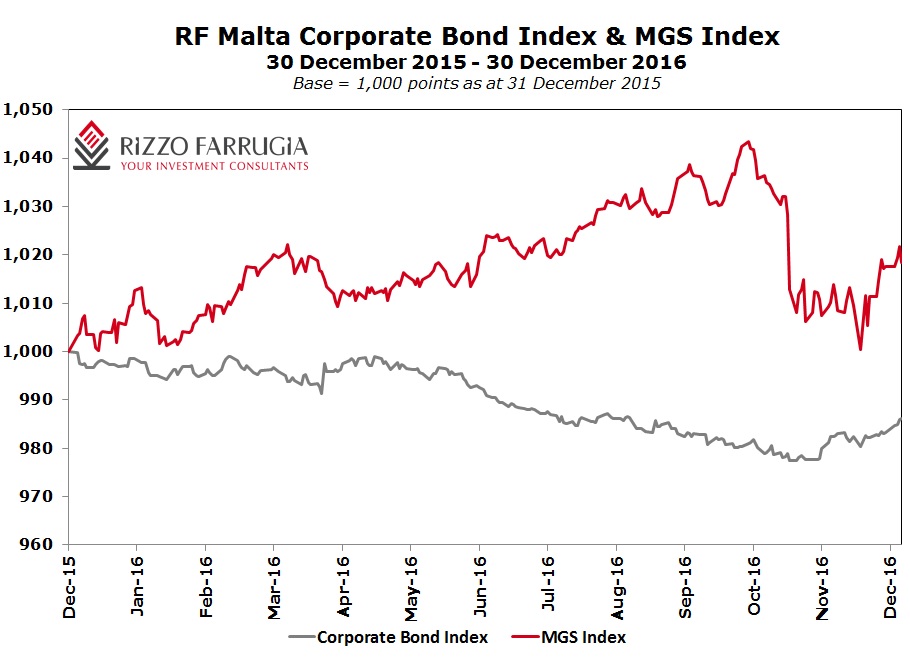 On the one hand, the Federal Reserve raised interest rates only once in 2016 – and this was only at the very end of 2016 – while the ECB at first expanded its bond-buying programme (Quantitative Easing) to €80 billion per month and further reduced its deposit rate to minus 0.4% from minus 0.3% in March 2016, but then in December 2016 it announced a scaling back of the size of its QE programme to €60 billion per month from April 2017, albeit with an extended deadline of 9 months until December 2017.

In this context, one can better understand the reasons for the sharp movements in sovereign yields both in the US and also in Europe during the course of 2016.

During the first part of 2016, yields dropped drastically culminating in a mid-summer bond market rally. In fact, on 6 July 2016, the yields on both the benchmark 10-year US Treasury and the German Bund touched fresh record lows of 1.321% and minus 0.204% compared to the December 2015 year-end levels of 2.27% and plus 0.63% respectively.

Thereafter, as various economic and political developments unfolded during 2016 culminating in the result of the US Presidential election and a few weeks later the extended but reduced QE programme by the ECB, the spread between the 10-year US Treasury and the 10-year German Bund widened to reach an all-time high of 235 basis points on 27 December 2016.

The movements in Eurozone bond markets naturally impacted MGS prices. This is evident from the Rizzo Farrugia MGS Index which tracks the indicative opening MGS bid prices quoted by the Central Bank of Malta. The index is based on the weighted outstanding amount of each stock and as such movements in the larger MGS issues (namely the 5.00% MGS 2021 and the 5.25% MGS 2030) led to greater changes in the index compared to some of the smaller issues (such as the 3.3% MGS 2024).

After two brief downturns in February and April 2016, the RF MGS Index rallied strongly to an all-time high of 1,182.272 points on 24 October 2016. On the day, the indicative opening bid prices for ten MGS’s were more than 10 percentage points higher than their respective bid prices at the end of 2015. In particular, the prices of 5 of the longest-dated MGS’s were 15 percentage points higher than as at 30 December 2015, as shown in this table: 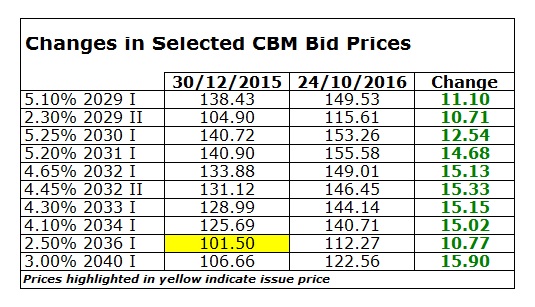 In addition to the downturn in Eurozone yields, the other major factor that led to a continued upward rally in MGS prices was the Malta credit rating upgrade by Standard & Poor’s on 14 October 2016. The world’s foremost credit rating agency upgraded Malta for the first time in 20 years. As Malta’s sovereign debt achieved a rating of ‘A’ from ‘BBB+’, this was reflected in a stronger upward movement in prices as the credit risk for investors holding Malta Government paper over the ‘AAA’ rated German bund diminished.

In the run-up to the US Presidential election on 8 November, the yields in the US and the euro zone started to climb again, with the 10-year German Bund closing above the plus 0.1% level in late October for the first time in nearly five months.

Volatility in bond markets peaked when the surprise election of Mr Donald Trump to the Presidency of the US sparked an intense and broad sell-off in bonds which sent the 10-year US Treasury yield rallying by 75 basis points in a few weeks to above the 2.5% level. The expectation of multiple interest rate hikes in the US and a return of higher inflation coupled with improving economic data in Europe resulted in the German 10-year bund yield rallying to an intra-day high of plus 0.453% on 8 December 2016.

The wild movements in international yields was also felt in Malta as the RF MGS Index tumbled by over 4% in less than 2 months from its record reading on 24 October to mid-December 2016. During this seven-week period, most of the considerable gains in MGS prices accumulated along the previous months evaporated.

Despite the intense volatility during the year, the RF MGS Index still closed the year with a gain of 1.84%.

During 2016 the Treasury tapped the retail market on three occasions raising a total of €520 million. Trading activity in the MGS market amounted to €551.8 million in 2016, a decline of nearly 29% compared to 2015 and the lowest level since 2012. The main reason for the decline in secondary market trading in MGS’s was the QE programme running for an entire twelve months. In fact, during 2016, the Central Bank purchased a total of €525 million in MGS’s via the QE window and this activity is not accounted for in the trading statistics of the Malta Stock Exchange.

On the other hand, in the corporate bond market, volatility was less intense as prices here are determined by supply and demand and not dictated by the Central Bank of Malta although a number of corporate bond prices also dropped from their respective record levels. During 2016, we launched the Rizzo Farrugia Malta Corporate Bond Index to track the price movements across the corporate bond market. This index closed the year 1.4% lower (2015: +2.5%) as some bond prices dropped from their record levels and others which have an early redemption option (callable bonds) in 2016 and 2017 declined in view of their expected early maturity.

However, the main 2016 highlight was the record amount at €398.2 million of new issuance in a single year (via the primary market) across corporate bonds. Various issuers tapped the market including two new names for the local market – Dizz Finance plc and Mediterranean Maritime Hub Finance plc. On the secondary market, €57.9 million worth of corporate bonds changed hands in 2016 – the second highest level of trading activity in the local corporate bond market after 2015. In 2016, there was also the largest ever issuance from a non-banking institution when on 7 October, Premier Capital plc launched a €65 million issue. This was carried out to finance the early redemption of its €24.6 million bonds maturing in March 2017 and to refinance bank facilities part of which were used for the USD65.3 million (€63 million) acquisition of McDonald’s Romania as well as for part-financing some of the company’s upcoming capital expenditure. The offer was heavily over-subscribed.

During 2017 as announced by the Treasury last week, it is expected that in the second half of the year it will launch the new Malta Government Savings Bonds for pensioners. Meanwhile, the first MGS issue is expected to take place next month and it would be interesting to see the response for the new offerings from the retail investing community following the intense volatility across the MGS market in recent weeks and in particular the decline in the price of the most recent longer-dated MGS issue to below par value. Across the corporate bond market, we expect another record year with various new bond offers hitting the market including those from a number of new companies. This is likely to assist income-oriented investors to reposition their portfolios accordingly during the year.