At this time of the year, many financial journalists and commentators look back at the various developments which took place over the past twelve months. Although 2016 was largely dominated by two major political events – the Brexit referendum which eventually led to the resignation of Mr David Cameron as Prime Minister of the UK and the US Presidential election – there were various other events which made 2016 particularly volatile for all asset classes.

Indeed, following one of the most dreadful starts of the year in recent history, possibly very few investors would have imagined that most international equity markets would end the year in positive territory. January 2016 was truly the start of an eventful year with several shocks that led to continued volatility from one quarter to the next.

On 4 January, the first trading day of 2016, the Chinese Shanghai Composite index plunged 6.9% as economic data confirmed that the manufacturing sector shrank for the fifth successive month. The erratic intervention by the Chinese authorities to stem the decline across the equity market following the severe losses registered since mid-2015 triggered a wide sell-off across global equity markets during the first few days of January.

As a result, all the main global equity markets suffered considerable losses in January 2016. China’s Shanghai Composite Index was the worst performer with a drop of 22.6% while the indices in the UK, France and Japan also entered into bear market territory (i.e. a decline of more than 20% from their previous peak). Germany was among the worst performers in Continental Europe with a decline of 8.8%, followed by France’s CAC40 down 4.8%. In the UK, the FTSE100 shed 2.5% while in the US, the S&P 500 index declined by 5.1% during the month of January, the Dow Jones Industrial Average dropped 5.5% and the NASDAQ slumped 7.9%.

At the end of January, the Bank of Japan surprised many analysts when it followed the steps of other major central banks (namely the European Central Bank [ECB] and the Swiss National Bank [SNB]) and announced an interest rate cut into negative territory.

Equity markets continued to decline in early February and reached a low by mid-February after which a remarkable recovery took place. Between mid-February and the end of Q1 2016, the two main indices in the US (the DJIA and the S&P 500) managed to recover all the losses sustained during the first 6 weeks of the year and moved into positive territory on a year-to-date basis with gains of 1.5% and 0.8% respectively. The NASDAQ rallied by 13% but still closed Q1 in negative territory with a decline of just over 2%. Similarly, the main European indices all gained between 11% and 15% from their respective closing levels on 11 February but also closed in negative territory with the exception of the FTSE 100 which registered a minimal gain. Meanwhile, the equity markets in China and Japan also recovered strongly but still ended the first quarter of 2016 showing double-digit losses.

Another major factor that impacted investor sentiment during the first few months of 2016 was the sharp drop in the price of oil which touched a 13-year low on 11 February.

Early in the second quarter of the year, the main factor impacting investor sentiment was the 23 June UK referendum on EU membership. Ahead of the referendum, most analysts were predicting a sharp drop in the value of the British currency in the event of a ‘Leave’ vote. In the run up to the referendum, Sterling was trading at around GBP0.765 against the euro.

Following the ‘Leave’ vote, Sterling dropped by 11.3% against the euro and continued to hover around the GBP0.85 level (or EUR1.176)  until early August. However, the stronger-than-expected monetary stimulus measures announced by the Bank of England in early August sent Sterling reeling to GBP0.87 – its lowest level against the euro since 2013.

The ‘annus horribilis’ of the British pound was not over as it sold-off sharply on the night of 7 October when it hit a low of GBP0.9430 (the lowest against the euro since 24 March 2009 and a fresh 31-year low of GBP1.145 against the USD) in what many commentators refer to as the pound’s ‘flash crash’. Some analysts attribute this to a story published in the international media that French President Francois Hollande was taking a tough stance on Brexit. Other commentators attribute this short-term decline to a ‘fat finger’ error by a particular trader which had a ripple effect across the currency market. 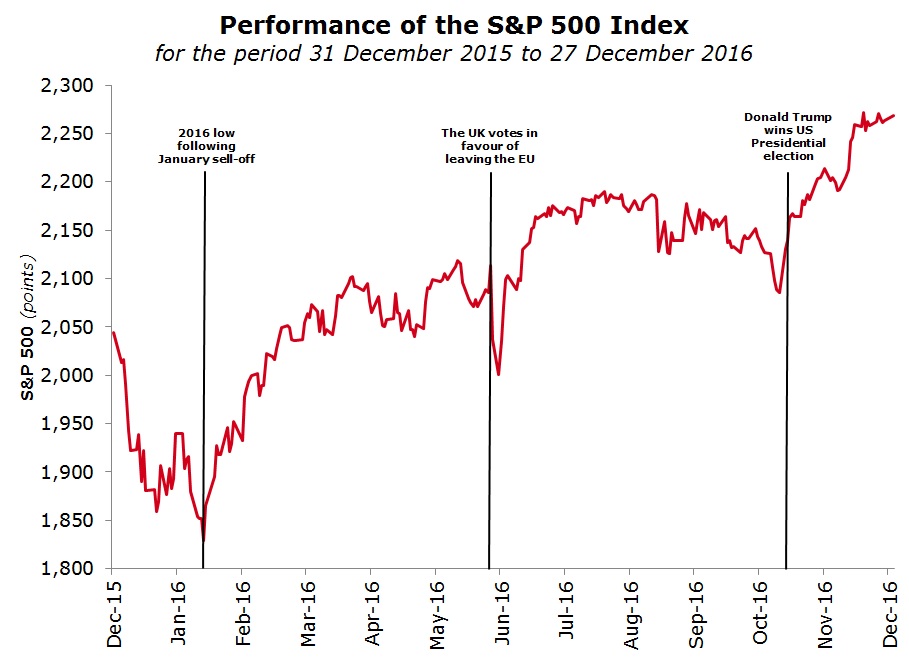 The third quarter of 2016 can probably best be described as the final leg of the international bond market rally spanning over 30 years. The decision by the Bank of England on 4 August to revive its Quantitative Easing programme sent yields to fresh all-time lows. In fact, the yield of the 10-year UK gilt dropped to 0.51% compared to 1.38% on referendum day.

The US Presidential election on 8 November was another defining moment for financial markets this year. There was widespread consensus among financial analysts that a victory for the Republican contender Donald Trump would create global economic uncertainty and send equity markets into turmoil, while the US Dollar would weaken significantly and bond prices would rise (yields decline). On the other hand, a victory for Hilary Clinton was viewed as potentially positive both for equities and the US Dollar but negative for bonds as the Federal Reserve would accelerate the hike in interest rates. However, contrary to all expectations, the shock of Donald Trump winning the election was indeed very short-lived and lasted less than a few hours on the morning of 9 November. Investors quickly reassessed earlier expectations and the new theory circling financial markets was that the policies of a Republican-controlled Congress (which focuses on the implementation of fiscal stimulus measures including tax cuts and easing regulations for US businesses especially healthcare and financial companies) would boost economic growth and lead to higher inflation. Although the indications on 9 November at the time of the final counting of the electoral college votes was that the S&P 500 index would drop by 5% when trading resumed, sentiment quickly reversed and the S&P 500 actually closed the day 1.1% higher. This was truly the start of a remarkable rally that has propelled US equity markets to a series of fresh record highs in recent weeks.

While the decline in the price of oil to a 13-year low in mid-February was a determining factor to weak investor sentiment at the start of 2016, the OPEC oil production deal agreed to in November (to cap production in order to support the price of oil) together with a subsequent agreement also between non-OPEC producers to also cut supply in December helped the price of oil to recover strongly.

Lastly, the Italian constitutional referendum that took place on 8 December was another major political event that was expected to shake investor sentiment. Although the rejected constitutional reforms triggered the resignation of Matteo Renzi as Prime Minister of Italy, equity markets again took this latest development in their stride and in fact, the Italian benchmark FTSE MIB rallied by over 5% since the referendum. Despite this, the shares of Italian banks are still sharply lower this year due to the sizeable amount of bad loans plaguing the country’s banks and their need for recapitalization which last week culminated in the controversial bailout of the world’s oldest bank – Monte dei Paschi di Siena.

2016 was definitely not a year for the faint-hearted and 2017 is likely to be another eventful year influenced by the policies of the new US administration, the pace of interest rate hikes to be adopted by the US Federal Reserve, developments regarding discussions on Britain’s relationship with the EU and trade agreements with other important economic partners, as well as a series of tightly-contested elections in France, the Netherlands and Germany that could largely determine the future of the whole European Union project.