Last Friday, Bank of Valletta plc published its annual financial statements for the year ended 30 September 2016. As expected, the results were significantly impacted by the exceptional gain arising from the sale of shares in VISA Europe. On 22 June, BOV had informed the market that the total consideration from this transaction amounted to €29.1 million.

The annual financial statements published last week show that BOV generated record pre-tax profits of €145.9 million during its last financial year, up 23.7% from the previous financial year. However, excluding the exceptional gain of €27.5 million recognized in the financial statements, the adjusted profit of €118.3 million is only marginally ahead from the previous year. This should still be considered to be a very positive outcome given the very tough conditions across the banking sector.

The unprecedented interest rate environment with negative rates of interest on deposits placed by financial institutions with the European Central Bank is very damaging for banks, especially those with high levels of liquidity. Most Maltese banks are in this situation which under normal circumstances is considered to be a very healthy sign for banks. However, in a negative interest rate environment, having excessive levels of deposits places downward pressure on interest income.

BOV’s balance sheet as at 30 September 2016 shows a total amount of €9.2 billion in customer deposits (an increase of €621 million over the previous year) and €4 billion in loans to customers, representing a minimal change over the previous year. The widening gap between the level of deposits and loans is negatively impacting the bank’s profitability. In fact, the loan to deposit ratio has dropped to 44% from 64% four years ago.

Apart from the negative interest rate scenario and the high levels of liquidity, the other major factor impacting the banking sector is the stiffer regulatory environment which is translating into a higher cost base. This was also evident in BOV’s financial statements over recent years. During the year ended 30 September 2016, operating expenses increased by 4% to €112.8 million. Four years ago operating expenses were €90 million.

Shortly after the publication of the financial statements last Friday, BOV convened its customary semi-annual presentation for financial analysts. Chairman John Cassar White gave a very detailed presentation explaining the main highlights that characterized the bank’s performance during the financial year under review.

As indicated above, the normalized profit was marginally higher over the previous year. Despite the downward pressure on interest income arising from the negative interest rate environment, net interest income still improved by 2.8% to €148.8 million as many retail customers continued to opt for short term deposits thus helping the interest expense to continue to decline. Net fee and commission income improved by 5.6%, however profit from foreign exchange activities declined by 9.2% as the bank transacted lower volumes of business reflecting the de-risking strategy currently being implemented. The single major item that impacted the financial performance was the €10 million decline in impairments. On the other hand, however, the share of profits from the insurance associate companies (MSV Life plc and Mapfre Middlesea plc) shrunk by €8 million to only €3.7 million.

Although the adjusted profit before tax of €118.3 million was a positive development, two key financial metrics which ought to have pleased market observers were the return on equity and the capital ratio. The adjusted after-tax return on equity after excluding the one-off gain from the VISA transaction was of 11%. Although this is at its lowest level in the past five years (down from a high of 15% in the 2011/12 financial year), it is very uncommon nowadays to find a bank across the Eurozone generating double-digit returns on equity. Moreover, the strengthening capital position of the bank is another very positive development as the core tier 1 ratio improved to 12.8% from 11.3% last year.

BOV’s Chairman spoke at length about the 4 cornerstones of the bank’s long-term strategic priorities. Mr Cassar White stressed that the short-term profitability of the bank is not a top priority. Instead, the major focus is to ensure the long-term stability and sustainability of the bank for all stakeholders. The other immediate priorities are to replace the core IT system of the bank, to strengthen corporate governance and revise the business model of the bank. 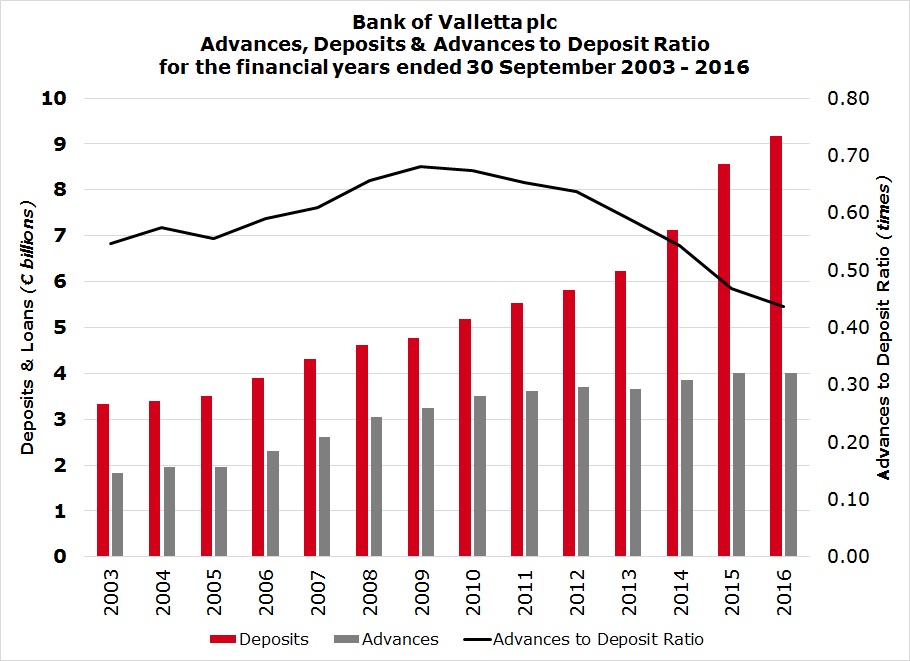 The Chairman explained that the bank’s executive management team makes every effort to protect the interests of depositors as well as the numerous shareholders. Mr Cassar White also highlighted the fact that the mentality that dividends to shareholders should increase in line with an increase in profitability does no longer apply. The Chairman explained once again that dividend payments are now approved by the regulators (the European Banking Authority). The basis for the calculation of a dividend is now determined by the strength of the balance sheet and the capital ratios rather than the underlying profitability.

This point had been highlighted in the past few years. In fact, it may be surprising to many that following the 8% increase in the interim dividend distributed last May, the Directors once again recommended an equivalent hike in the final dividend to a gross dividend of €0.0852 per share for approval at the upcoming Annual General Meeting. However, the dividend payout ratio has declined over the past few years from 44.5% in 2012 to 33.3% in the financial year that recently came to an end.

Another surprising outcome from the meeting with analysts was that as a result of the strong rise in the capital ratio to 12.8%, BOV is not in any immediate need for an equity injection. Until some months ago, BOV’s executive management had indicated that BOV may need to increase its equity base, possibly via a rights issue in 2017, ahead of more stringent capital requirements as from 2018. However, last Friday, Mr Cassar White explained that a capital raising exercise is now very unlikely to materialize in 2017 and may be postponed further into the future. The timing of the sale of the VISA investment may have been the key factor that impacted this decision which should be very comforting for shareholders.

On the other hand, however, the change in the business model from one based on growth to one focused on quality may dampen short-term profitability levels. Mr Cassar White stated that this is the most delicate aspect to explain to shareholders. Naturally, a lower risk attitude coupled with higher profit retention to increase the capital base in a consistent manner will undoubtedly result in lower returns for shareholders. Mr Cassar White also made reference to the changes taking place in the banking sector compared to a very different mentality several years ago. The Chairman also argued that those people (including politicians, shareholders and employees) who do not appreciate the significant changes taking place in the banking landscape are “self-delusional”.

Apart from the various developments highlighted above, another aspect that had been mentioned by the Chairman in a media article which will impinge on the profitability of all banks in the future is the implementation of a new financial reporting standard (IFRS 9) dealing with the provisioning policy. Although, very little mention of this was made in last week’s meeting, this is another factor that needs to be considered by financial market observers ahead of its implementation in January 2018.