Last Monday, the Central Bank of Malta officially announced the start of reverse auctions in Malta Government Stocks as part of the Quantitative Easing (QE) or the Public Sector Purchase Programme (PSPP) being conducted by the European Central Bank.

It is worth recalling that the QE programme started in March 2015. This is a means of money printing through a process by which national central banks inject cash into an economy by buying government bonds from banks and other holders of such securities including retail investors.

Statistics published on a monthly basis by the European Central Bank show the purchases conducted by each national central bank across the Eurosystem. The statistics  reveal that since the start of the QE programme in March 2015, a total value of €598 million of MGS’s have been purchased by the ‘QE desk’ at the Central Bank of Malta.

Some readers may be questioning the meaning of a ‘reverse auction’. It is a customary auction but the bidders in this case are sellers and not buyers. As such, in a reverse auction, potential sellers compete to undercut one another on price, such that the lowest bid is the winning bid.

Reverse auctions were initially conducted on a trial basis by only three central banks within the Eurosystem (France, Netherlands and Lithuania) between October and December 2015. This system was also adopted by the US Federal Reserve in its own quantitative easing programme some years ago.

Based on these results, the Eurosystem concluded that reverse auctions may be a complementary method in less liquid markets and the ECB’s Governing Council endorsed a regular use of reverse auctions by some national central banks apart from the continuation of the customary regular purchases of public sector assets during the ordinary course of the QE programme. The Central Bank of Malta officials explained that the trials by the three central banks not only encouraged competitive pricing but also improved the transparency of the system adopted to date.

In fact, in the QE programme conducted in Malta since March 2015, the individual trades showing the volume and prices achieved by the individual sellers are not disclosed on a daily basis via the Central Bank or the Malta Stock Exchange website. As such, it was impossible to follow market movements and guide potential sellers on the best prices that may be achieved in particular securities.

On the other hand, under the reverse auction, the Central Bank will publish on a weekly basis the total amount offered by investors across all the various securities (i.e. an aggregate of all the offers received) and the total amount accepted (an aggregate of all the offers that have been accepted by the Bank). Moreover, for each MGS, the minimum price, the weighted average price and the maximum price paid per individual security will also be revealed. The reverse auction therefore provides a more transparent approach compared to the ‘bilateral’ purchases conducted so far. 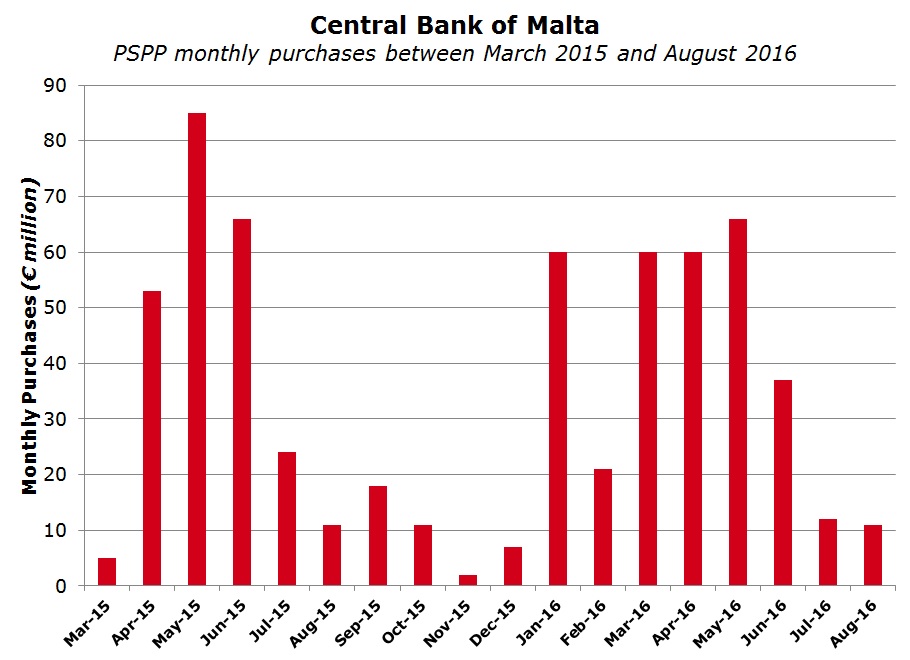 The officials at the Central Bank explained that on a Monday afternoon, the various securities in which an auction will take place on the following Wednesday morning will be announced. Between 4 and 6 individual MGS’s will form part of the weekly auction. Once the individual securities will be revelaed on Monday afternoon, it will allow sufficient time for participants to prepare for the auction taking place between 1030 am and 1130 am on the Wednesday. The Central Bank confirmed that within a maximum of one hour after the closure of the auction, the successful bids will be announced. These will then be passed in the normal manner in the Over-The-Counter (OTC) market and settlement will also take place on a T+2 basis, i.e two business days after the trading day.

The auction will be a multiple-price auction and therefore allocation will take place on a variable rate with discriminatory pricing (multi-price auction). As such, one particular MGS may be purchased at multiple prices.

An important development is that on a Wednesday when reverse auctions are taking place in a specific set of MGS’s, the daily QE programme will not take place.

At the end of last week’s presentation, the Central Bank of Malta indicated that a further €600 million of MGS’s may be repurchased under the current QE programme running to March 2017, which is the current deadline of the QE programme across the Eurosystem.

However, this deadline may well be extended once again as the ECB continues to grapple with weak inflation statistics. Given the particular circumstances of the market in Malta with highly liquid financial institutions who do not need to dispose of their MGS holdings to expand their loan book and with many retail investors still adopting a ‘buy and hold’ strategy, the task of the Central Bank of Malta to achieve the ECB quota is a tough one and can only become harder to achieve as more time passes.