Since the financial year-end of the large majority of companies listed on the Malta Stock Exchange is in December, these companies must publish their annual financial statements by 30 April at the latest.

The annual financial reporting season will be commencing within the next two weeks. HSBC Bank Malta plc will be publishing their 2016 financial results on 21 February followed by Malta International Airport plc the day after. Unfortunately, some companies fail to announce the date of the publication of their financial statements well in advance of the actual date. It is customary practice overseas for investors to be notified of such dates several weeks before the event. The dates of publication of a company’s financial results on a semi-annual basis are the most important highlights of an investor’s calendar. Apart from obtaining valuable insight on a company’s performance and at times its future outlook, the publication of a company’s financial statements twice a year also coincides with the announcement of the payment of dividends to shareholders.

Dividends were always an important source of income for investors and the income stream derived from shares grew in importance in recent years following the unprecedented decline in yields across the bond market.

On an annual basis following the termination of the reporting season, I generally publish the dividend league table to depict those companies which are producing the highest dividend yields.

Since some companies benefit from tax incentives and distribute dividends out of tax free profits or reduced tax rates compared to the standard 35%, the yields displayed in the annual dividend league table are based on the net dividends being proposed or paid to shareholders.

The net dividend yield measures the absolute net dividend compared to the share price. Due to regular movements in share prices, the dividend yield changes accordingly. In recent years, the share prices of several of the companies generating regular and sustainable dividends to shareholders surged on the back of a significant increase in demand for income-generating equities following a sharp decline in official interest rates and corresponding yields across the bond market. In some of my articles in the past few months, I remarked how the share prices of Plaza Centres plc and Tigne Mall plc have more than doubled in value since the second half of 2014 while the share price of Malita Investments plc is up around 53.3% since mid-2014. Most of the other companies that have paid dividends at least annually, have also experienced similar positive performances in their share prices.

The significant rally in various share prices subsequently resulted in a decrease in the dividend yield as the growth in dividends was far less than the increase in the share price. As an example, in the case of Tigne Mall plc and Plaza Centres plc the absolute dividends to shareholders increased by 80.2% and 20.2% respectively over the past 2 financial years. However, since the share prices more than doubled, the yields declined from 2.4% and 4% in 2014 to 1.9% and 2.6% in 2016 respectively. Meanwhile, the dividend of Malita paid out in respect of the 2013 to 2015 financial years was relatively unchanged  and as such the yield declined from 4.1% in 2014 to a current 2.8%.

For certain types of companies, the dividend yield is one of the financial metrics generally used to measure whether an equity is attractively priced or overvalued. The more commonly used valuation multiples are based on profitability or asset values, depending on the nature of the company. The dividend yield becomes much less relevant for those companies seeking to expand internationally as these have the potential to increase their profitability exponentially in the event of a successful new contract or business development.

Although the dividend yield is still an important measure for the market in general, investors who are interested in income-generating equities need to look beyond the current yield before contemplating either an initial investment or an additional allocation to the equity or whether it would be advisable to dispose of an equity and seek an alternative investment.

Since dividends are not fixed from one year to the next (as in the case of interest rates on bonds) and may fluctuate or be eliminated completely depending on individual company circumstances, investors need to pay particular attention to a variety of other factors such as a company’s cash flow generation, capital expenditure plans, overall leverage as well as potential changes in regulation.

A dividend cover of 2, for example, indicates that a company has sufficient profits to pay its dividend twice over from current earnings. While a high dividend cover is a good indicator, it should not be taken as a guarantee that the current dividend will be sustained in future years. 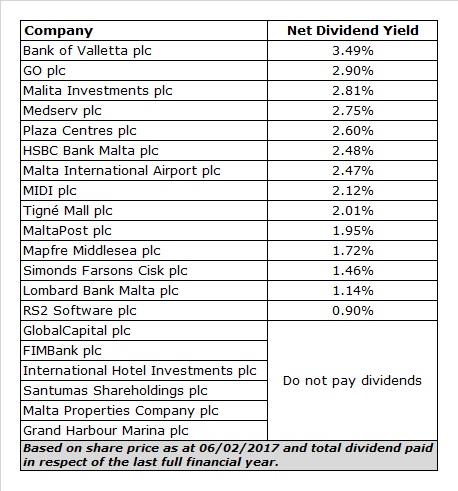 Most of the companies listed on the MSE paid a dividend in the last financial year with the exception of International Hotel Investments plc, FIMBank plc, GlobalCapital plc, Santumas Shareholdings plc, Malta Properties Company plc and Grand Harbour Marina plc. It is interesting to note that none of the dividend-paying companies have an interest cover of less than 1, which is a comforting signal for investors.

From the announcements issued so far, it seems that HSBC Bank Malta plc will be the first company to publish its 2016 annual financial statements on 21 February. As I explained in my article two weeks ago, the main focus on the day will be on whether the bank will maintain its payout ratio of 60%. A confirmation of this high dividend distribution could help sustain the recent recovery in the share price which traded up to a three year high of above €2.00 from its 12-year low of €1.55 only six months ago.

The following day, Malta International Airport plc will be publishing its 2016 annual financial statements. MIA already confirmed the amount of passengers that passed through the terminal last year and this is a very good proxy for the company’s financial performance. The company also published its financial targets for 2017 and the most important statement on 22 February will therefore be the final dividend being declared for approval by shareholders at the upcoming Annual General Meeting.

The importance placed by investors on dividend distributions was amply evident last year when MIA announced a 9.1% drop in the final dividend (from the record final dividend in respect of the 2014 financial year which had surged by 46.7%), and the share price quickly dropped from the all-time high of €4.76 reached on the day of the publication of the financial results. Although passenger movements exceeded expectations during 2016, the share price has failed to regain its all-time high as investors await the upcoming dividend decision.

Although GO plc have not yet announced the date when it will be publishing its 2016 annual financial statements, the market will also be very attentive to their dividend declaration following the 42.9% hike in last year’s dividend which was paid shortly before the acquisition of a majority stake in the company by Tunisie Telecom.

During the annual financial reporting season commencing shortly, dividend declarations by the various companies will be among the key items being looked upon by the investing community. On their part, companies must aim to provide clear explanations behind their dividend recommendations, insight into the future dividend policy as well as a comprehensive review of possible upcoming developments.