In last month’s article we reviewed the three bond issuers which are mainly dependent on the local tourism industry and made reference to the obligation for most bond issuers to publish an updated Financial Analysis Summary (FAS) on an annual basis.

We had also stated that the principal objective of an FAS is that of assisting investors to obtain a better understanding of the financial strength and credit worthiness of an issuer and, in the case where the bond is guaranteed by another entity, of the guarantor of the bonds.

On 27 June 2016, Hal Mann Vella Group plc announced that it published its updated FAS dated 31 May 2016. This report provides a review of the 2015 financial statements, an analysis showing the variance between the actual results for 2015 and the original forecasts, the projections for 2016 and some important changes to the Group’s business model.

It is worth recalling that when Hal Mann Vella published its Prospectus in connection with the €30 million secured bond issue in October 2014, the intention was to (i) refinance €13.7 million in bank loans; (ii) finance the modernisation of the Lija factory at a cost of €5 million; and (iii) finance the construction of a mixed-use development in Lija earmarked for lease to third parties at a cost of €7 million. The remaining net balance of €3.6 million was intended for general corporate funding purposes.

The Prospectus had detailed the Group’s business strategy and the efforts to continue diversifying into the hospitality sector as well as the fashion retail business. Although the revenue and profit contributions at the time were still very immaterial in the context of the overall business activities, the Group had some interesting plans in both these sectors.

In the hospitality sector, the Hal Mann Vella Group owns two aparthotels (Mavina & Huli) and the Lovage Bistro, all located in Bugibba. At the time of the bond issue, it had been indicated that an application was submitted to the planning authority for the refurbishment of the Mavina hotel at an envisaged cost of €2.5 million which was intended to be financed via new bank borrowings. However, the FAS published a few months ago revealed that the Hal Mann Vella Group has now leased out its two hotels as well as the restaurant to third parties for a period of ten years.

In the fashion retail industry, at the time of the bond issue in October 2014, the Hal Mann Vella Group operated three ‘GUESS’ outlets and one outlet of ‘Brooks Brothers’. During the first quarter of 2015, the Group acquired two further retail stores operating under the brand ‘7 Camicie’ and another outlet was opened as a warehouse clearance store. Until last year, the Directors were projecting that revenues from the fashion retail sector would increase to €2.4 million in 2016, thereby contributing circa 15% of overall Group revenues. However, the FAS dated 31 May 2016 confirmed that the Group transferred the franchise/license agreements of the various brands to a third party and also sold its inventories to the new operator of the three brands, thereby exiting this area of operation as the Group was suffering losses in this business segment.

The recent changes to the overall business strategy of the Hal Mann Group are possibly as a result of the disappointing financial performance registered in 2015 which is expected to deteriorate further during the current financial year.

The 2015 financial statements were first published on 28 April 2016 and the FAS gives much more detail than the Annual Report available online. The 2015 financial performance was well below the forecasts first published in the Prospectus dated 6 October 2014 and later reconfirmed in the FAS dated 27 July 2015. While the Group generated slightly higher revenues at €14.1 million when compared to FY2014 (or +1.9% over the 2015 forecasts), this did not translate into higher earnings before interest, tax, depreciation and amortisation. EBITDA fell drastically to just €57,000, which is 88.5% lower than the corresponding figure of 2014 of €497,000 and significantly below the forecasted figure of €2.1 million.

The 2016 projections were first available in the FAS published on 28 July 2015. At the time, the Group was expected to generate revenue of €15.7 million and an EBITDA of €2.7 million. However, the FAS dated 31 May 2016 showed a significant revision to the 2016 projections. Revenues are now expected to amount to €15.1 million whilst EBITDA is now estimated at a negative €2.9 million. 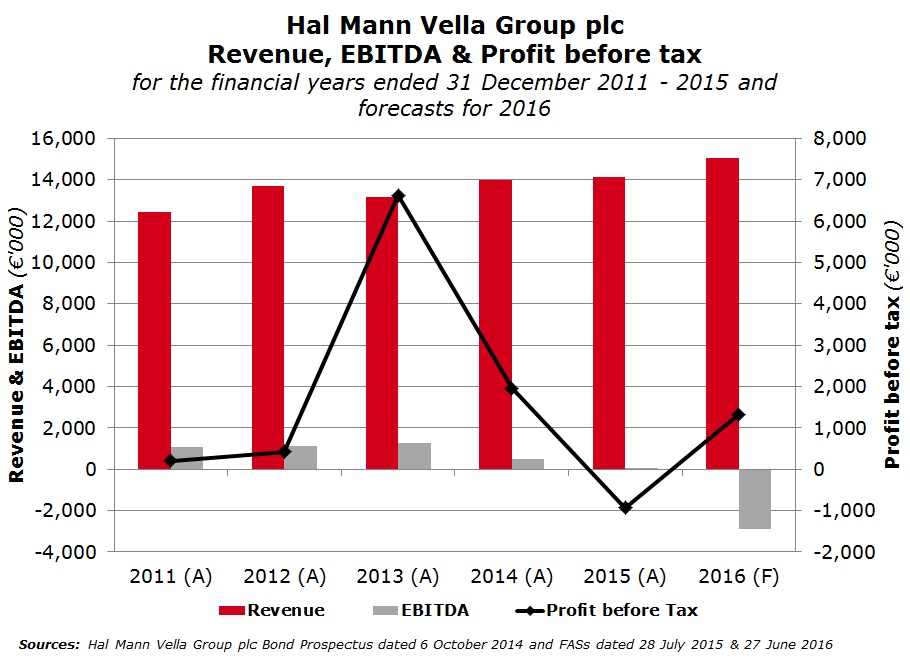 The operating loss before depreciation and finance costs expected during 2016 is mainly due to three one-off items, namely (i) a €2.5 million write-off in inventories; (ii) a provision for works-in-progress of €0.6 million; and (iii) a provision of bad debts of €0.5 million. Furthermore, the overall financial performance of the Hal Mann Group in 2016 is also expected to be negatively impacted by a €0.5 million loss related to the fashion retail business unit which was discontinued earlier this year and therefore does not feature within the EBITDA figure.

Another reason for the weakening performance in 2015 and 2016 is the additional costs incurred with respect to the new factories leased out in Hal Far. Last year, Hal Mann Vella Group had disclosed that it leased out a 14,000 sqm factory situated in Hal Far for a period of 65 years. Moreover, the FAS dated 31 May 2016 reports that a second factory was leased out in close proximity to the initial factory. No mention of these two major developments had been made during the bond issue. The Annual Reports published over the past two years as well as the FAS’s failed to indicate the annual cost of the lease or the investment required by the Group to deploy these factories. The reports simply stated that “the scope for acquiring this factory is to ease the operational flow at the Lija factory and to have sufficient capacity to consider new projects as and when they arise.”

The reconsideration of the diversification strategy into hospitality and fashion retail are comprehensible decisions in the circumstances. On the one hand, the fashion retail businesses were not profitable while on the other hand, the Group was about to embark on a €2.5 million refurbishment of one of its aparthotels. Thus, through the leasing out of these hotels, Hal Mann Vella Group has now managed to save on this capital expenditure at a time when it is performing negatively, thereby giving it more flexibility in concentrating further on its core business while constructing the commercial premises for eventual leasing.

The information provided in the FAS was very useful for financial analysts and investors to keep abreast of developments within the Hal Mann Vella Group.

The senior executive management of the Group however ought to have convened a meeting for financial analysts to provide further background behind the recent financial performance and future projections and the rationale for the important decisions taken in less than 2 years since the launch of the bond issue.

Given the higher number of companies using the bond market as well as the wider participation by the investing public due to the low interest rate environment, investor relations should start taking a more prominent role across most of the bond and equity issuers. The continuous flow of information to investors is fundamental for companies using the capital markets and the recent developments at Hal Mann Vella Group are a clear signal of the importance for investors and financial analysts to keep track of the financial strength of an issuer on a continuous basis.