The importance of the European Central Bank’s meeting last Thursday had been well-documented in the international financial media and also in some of my articles over recent weeks. Whilst in Malta the market was closed due to the public holiday celebrating the Immaculate Conception, on Thursday 8 December at 13.45 hours, the ECB announced that as from April 2017, the size of the quantitative easing programme will drop back to €60 billion per month but it will be extended until December 2017.

Many analysts had been expecting the size of the monthly programme to be maintained at €80 billion but the term was anticipated to be extended only for a further 6 months until September 2017 and not until December 2017.

Last Thursday, the ECB also decided to change the parameters of its bond buying programme by allowing the purchases of bonds which yield less than the current deposit rate of -0.4% and also by buying one-year bonds if necessary compared to the current restriction of a minimum of 2-year bonds.

The surprising announcement by the ECB led to intense volatility across European stockmarkets last Thursday afternoon as analysts initially seemed confused at the implications of the various measures taken. Immediately as the decision was announced, the euro jumped up by 1% to a four-week intra-day high against the US Dollar of $1.0872 but after a short period of time, the euro dropped back to $1.0605 representing a drop of 1.3% on the day. Similarly, the prices of long-dated Eurozone government bonds declined rapidly as the yield on the 10-year German bund raced up to 0.453% – the highest since January 2016. Similar to the reaction in the currency markets, the 10-year benchmark yield quickly eased back to 0.38% – a sharp downturn from the highs of the day but still above the level prior to the ECB announcement.

The renewed decline in the value of the euro late on Thursday afternoon and the partial drop in government bond yields following the initial rally were in reaction to the comments made by the ECB President Mr Mario Draghi during the customary press conference following the meeting.

As the ECB decision was communicated to the market early Thursday afternoon, the reaction by the main economists around Europe was that the reduction in the monthly bond purchases to €60 billion per month reflected a ‘tapering’ programme by the ECB. This term was originally coined by the former Chairman of the US Federal Reserve Ben Bernanke to describe the reduction in purchases of US Treasuries by the central bank in 2013.

However, Mr Draghi insisted that the reduction in the monthly program does not signal that the ECB is preparing to exit from QE. In fact, he stated that ‘tapering’ implies “a policy whereby purchases would gradually go to zero”. The President of the ECB was equivocal that such a policy was not even discussed and the Central Bank remained ready to increase asset purchases again should financial conditions become inconsistent with bringing the inflation rate back to target.

Mr Draghi said the ECB wanted to send the message that it would have a “sustained presence in the market” and he attributed the reduction in purchases from next year to the fact that deflation risks had “largely disappeared”. Indeed, in view of the fact that the level of inflation was still below the targeted level, Mr Draghi also noted that in the future the ECB was more likely to increase QE back to €80 billion a month rather than wind down the programme completely. 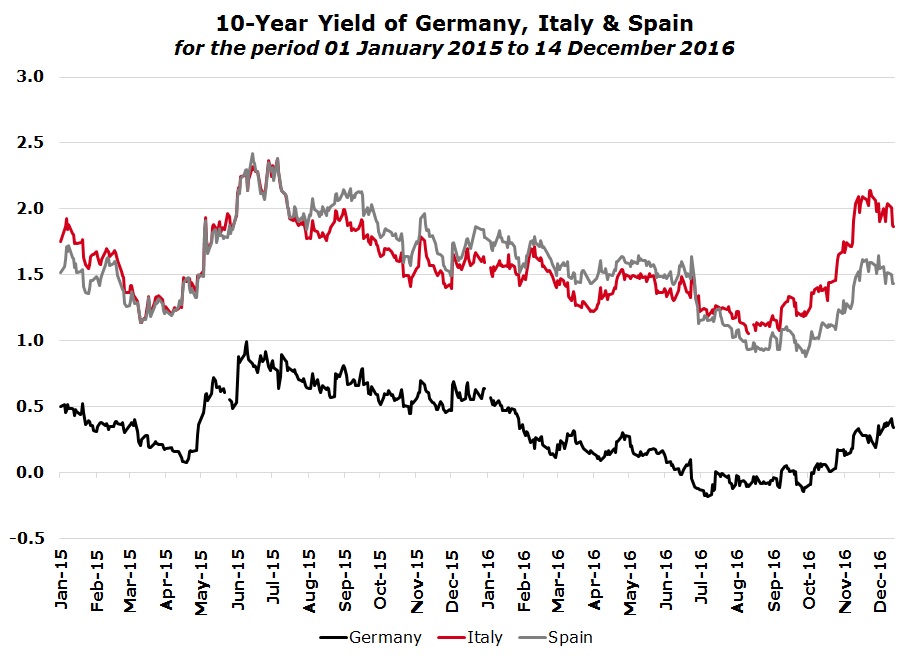 Despite such messages from the President of the ECB, the Eurozone bond markets continued to remain wary of whether the decision indicates the beginning of the end of the ultra-loose monetary policy or whether the bond buying programme will extend well into 2018. In fact, by the end of last week, although sovereign bond yields had eased from the spike following the immediate decision by the ECB, they remained higher than the levels prior to the meeting. This was also reflected in the prices of Malta Government Stocks on Friday when the Central Bank of Malta revised downwards the indicative bid prices twice in reaction to international developments. On the other hand, the prices of some short and medium-term MGS’s (those maturing between 2019 and 2023) improved in another sign that MGS prices largely mirror movements across the Eurozone bond market. In fact, medium term Eurozone bond prices improved following the ECB decision to also consider buying bonds that may yield less than -0.4%. On Monday morning, the prices of all MGS’s (especially those maturing from 2028 onwards) were priced sharply lower as a result of a continued upturn in yields across the Eurozone.

The downturn in MGS prices last Friday and Monday culminate a rather negative month for holders of sovereign debt in Malta and also across the Eurozone. Since the surprising result of the US election, bond prices declined significantly across the world in anticipation of higher rates of inflation. This also seems to have had a profound impact on the momentum of activity in the QE market in Malta. Statistics published by the ECB last week show that a total of €99 million worth of MGS QE trades took place in Malta during November. This is a record amount of monthly purchases of MGS conducted by the Central Bank of Malta under this programme and exceeds the previous record of €85 million registered in May 2015.

The significant increase in QE trades during the month of November at a time when MGS prices declined rapidly from their record levels reached the previous month clearly indicates the increased nervousness among investors holding MGS.

The elections in France, Netherlands and Germany taking place next year will play a determining role in movements across global capital markets in 2017. Moreover, the problems across the Italian banking sector will also continue to play a central role in the weeks and months ahead. Following last week’s decision by the ECB not to allow further time for the rescue of Monte dei Paschi di Siena by a group of private investors, up to 40,000 bondholders of one of the world’s oldest banks may be forced to convert their subordinated bonds into shares in the coming months.

In view of these serious challenges and their wide-ranging impact across equity, currency and also bond markets, it is evident that 2017 is also very likely to be a difficult year for the thousands of Maltese investors mainly exposed to the sovereign bond market.