Last week, Malta International Airport plc held its customary press conference and concurrently issued a company announcement to disclose the 2016 traffic results as well as to reveal its passenger forecast for 2017.

The airport operator announced a 32.2% increase in passenger movements during the month of December, equivalent to an increase of almost 79,500 passengers over December 2015. This staggering rise came about from the significant expansion in winter seat capacity which was already evident in November. The 2016/17 winter schedule, which started in November 2016 and which will last until March 2017, features 18 new connections as well as increased flight frequencies making it the busiest winter schedule ever for MIA.

The high passenger growth during the last two months of the year helped MIA register an overall 10% increase in passenger movements during 2016 to a record of 5.08 million movements (2015: 4.62 million) reflecting the 4.5% increase in aircraft movements and the 7.6% increase in seat capacity. A very important key performance indicator in this industry is the seat load factor which increased by a further 2.2 percentage points in 2016 to 83.3% (2015: 81.1%).

During the press conference, MIA’s CEO Mr Alan Borg also provided some of the milestones achieved by the company over recent years. The airport operator first breached the 3 million passenger level in 2008 and after 5 years in 2013, it then managed to surpass the 4 million mark. However, an additional 1 million passenger movements only took a further 3 years to achieve as the 5 million level was surpassed in December 2016. As such, Mr Borg highlighted the increased rate of success in the past three years which saw an average annual growth in passenger movements of 8.7%.

The 10% growth in passenger traffic during 2016 also exceeded the latest projection provided by the company in July 2016 where it had indicated that it aimed to achieve an increase of 7.5%. The most important contributor to the strong growth during 2016 was Ryanair. During the year, for the first time ever, Ryanair’s market share surpassed that of Malta’s national flag carrier Airmalta. Ryanair is therefore now the largest carrier to Malta.

2016 was the seventh consecutive year of record passenger movements. Despite this strong upward trajectory, MIA is expecting a further growth of between 2% to 3% in passenger numbers during 2017 to circa 5.2 million movements. The projected growth is based on the continued positive impact of the expanded winter schedule until March 2017 as well as the new routes and additional frequencies for summer of 2017 which include the first Malta to Malta “Cruise & Fly” service by P&O Cruises.

Despite the detailed information and the positive announcement of passenger movements during 2016 and traffic expectations for 2017, the major surprise of last week’s press conference was the announcement of a set of financial targets for the upcoming 12 months.

Although the 2016 financial statements will be published on 22 February 2017, MIA has already revealed its financial targets for 2017 based on the current passenger growth forecast of between 2% to 3%.

During 2017, MIA is expecting to generate total revenues of over €73 million which should lead to an earnings before interest, tax, depreciation and amortisation (EBITDA) of over €40 million and a net profit of over €20 million. MIA is also budgeting €18 million in capital expenditure whilst its net debt is estimated not to exceed €14 million in 2017. Furthermore, MIA revealed that annual taxes and dividend contributions to the Government of Malta are expected to be in the region of €14 million.

This is an excellent initiative which shows the evident change in the investor relations strategy at the airport operator. MIA is now the only Maltese company that is not only publishing its financial statements on a quarterly basis but also providing key targets for the upcoming financial year. 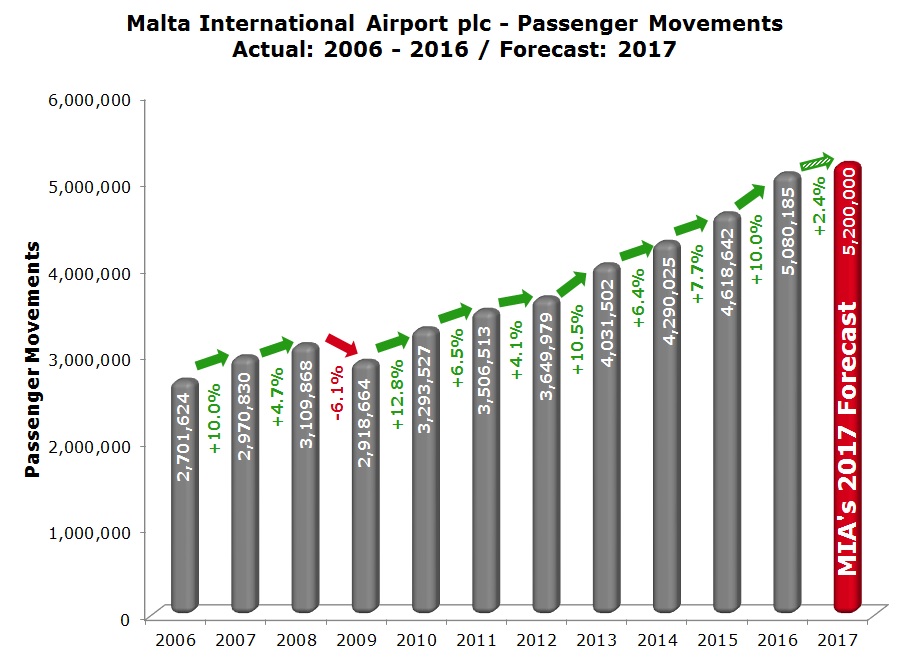 The airport operator had announced on 15 November that during the first 9 months of the year, it registered a 4.5% increase in total revenue to €55.5 million while the Group’s EBITDA improved by 7.4% to €32.04 million and net profit edged 10% higher to €17.07 million.

Given the availablility of the Q3 figures and the projections for 2017 already disclosed, some investors may argue that the publication of the 2016 annual financial statements is therefore a less important event.

Nonetheless, in my view, there are two important factors to look out for in the upcoming announcement of 22 February. As a start it is worth highlighting that the company’s financial performance in 2015 was positively impacted by a one-off gain of €1.86 million on the sale of shares in Valletta Cruise Port plc. The comparative performance that will inevitably happen after the issuance of the 2016 financial statements must therefore take this into consideration. One would need to gauge the company’s ability in replacing this one-off gain from its core business operations. The additional passenger traffic totaling just over 461,500 during 2016 should largely compensate for the non-occurrence of the significant one-off item in 2015 and lead to record profits once again.

Secondly, another important figure in the announcement of 22 February will be the final dividend that will be proposed for shareholders’ approval at the next Annual General Meeting.

The 2015 final dividend approved by shareholders at last year’s AGM had declined by 12.5% to a net dividend of €0.07 per share following the 77.8% spike in the previous year to €0.08 per share. In 2015, the company had reduced the dividend payout ratio to 70% once again following the upswing to 88.5% for 2014 with the aim of retaining higher levels of profits in anticipation of the company’s extensive capital investment plans. The market should therefore attentively view the amount of the final dividend in the light of the overall profitability generated during the year, the upcoming multi-million capital investment programme as well as the company’s indication that its net debt will not exceed €14 million (30 September 2016: €15.2 million) during 2017.

The investor relations programme adopted by MIA over recent months is an excellent way to create an effective communications strategy for its shareholders. It is also very much in line with the customary procedures adopted by companies listed on international stock exchanges.  Should other companies listed on the MSE also follow MIA’s investor relations efforts, it is very likely that we will have a more efficient and active equity market. This would surely be of benefit not only to all investors but also to the large shareholders of the different companies who generally dominate the board of directors and devise the plan of the executive management team. All directors should ensure that companies devote sufficient energy to this very important and often disregarded responsibility when admitted to a securities market. The Malta Stock Exchange as the operator of the trading platform as well as the MFSA as the local regulator of public companies should also devote sufficient time in urging companies to devise effective communication strategies to investors and financial analysts.