On 13 July, Malta International Airport plc issued a company announcement and held a press conference during which it announced its June traffic results and an increased passenger forecast for 2016.

June 2016 was yet another record month (the 51st consecutive month in which MIA registered record passenger traffic) with an increase of 6.8% to 490,381 passenger movements when compared to the same month in 2015.

As a result, during the first six months of 2016, MIA registered an increase of 195,574 passenger movements (equivalent to +9.8%) over the same period last year to 2,183,089 passenger movements. The growth was driven by a 7.4% increase in seat capacity and a 1.8 percentage point increase in the seat load factor to 80%. MIA’s CEO Mr Alan Borg explained that the high seat load factor is indicative of the strong demand for travelling to and from Malta.

Malta’s top market remains the UK, with 612,413 passenger movements (equivalent to a market share of 28%), followed by Italy (21% market share) and Germany (13% market share). The markets which registered the largest growth were Poland, Turkey and Switzerland, following the introduction of new flights and increased flight frequencies. However, these three markets still have a share of only 3% each.

During the recent press conference, Mr Alan Borg also explained that the double-digit growth in passenger traffic during the first three months of 2016 is in line with the strategy of attracting more travelers during the winter months and promoting Malta as a year-round destination. The Tourism Minister shared the same remarks and added that the air route development programme shows the concerted effort by all stakeholders involved. Minister Dr Edward Zammit Lewis singled out the growth registered in the Polish market and remarked that the diversification of source markets is also another important initiative being undertaken by the Ministry, the Malta Tourism Authority as well as MIA.

In terms of airline movements, Ryanair registered a remarkable 37% increase in passenger movements (equivalent to 202,691 passengers) to 744,391 passengers. Ryanair was the primary contributor to the strong growth in passenger growth at MIA during the first six months of 2016 and it is the first time that Ryanair’s market share surpassed that of Malta’s national flag carrier. Mr Alan Borg stated that this was not a surprising achievement given the fact that Ryanair has become the largest airline in Europe.

Essentially, the strong growth by Ryanair and the additional traffic by WizzAir and Turkish Airlines offset the decline in passenger traffic by AirMalta and Easyjet. MIA’s CEO explained that the 8.1% drop in traffic by AirMalta was due to a slowdown in Germany and Russia while Easyjet deployed less seat capacity to Rome and Belfast.

Following the 9.8% growth achieved during the first six months and the upcoming winter schedule now in hand, MIA revised its traffic forecast for 2016. On 18 January 2016, MIA had issued its 2016 passenger growth forecast at +2.4%. During the press conference on 13 July, the CEO of MIA reported that the company upgraded its forecast to +7.5% equivalent to 4.97 million passenger movements. This represents an additional 240,000 passengers from the forecast earlier this year.

The revised forecast takes into account traffic development for the 2016/17 winter season and other important factors that generally impact the aviation industry. Ryanair is expected to contribute to a large part of the growth envisaged in the coming months and the upcoming winter season as it is commencing 5 new routes and it is also extending 11 summer routes to winter. Other airlines that will be increasing capacity in the coming months include SAS, Vueling, Swiss, WizzAir and Turkish Airlines. Mr Borg emphasized that the seat load factor may weaken due to the additional capacity being deployed in the months ahead. 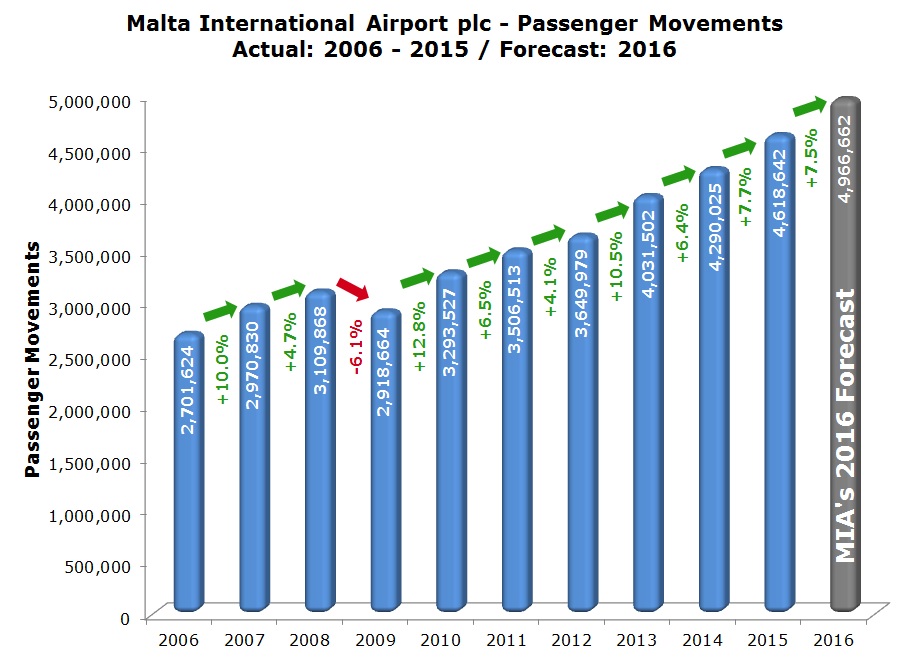 Understandably, the Brexit effect was also mentioned during the press conference. The CEO of MIA confirmed that the company was in touch with all operators in the industry and, at the time, no changes in bookings were recorded. While the uncertainty following the referendum result may impact consumer confidence in the months ahead, Mr Borg claimed that no significant changes are expected to passenger volumes. The Tourism Minister also remarked upon this very topical development and stated that he is not envisaging any major impact to tourism figures in the short to medium term. However, he claimed that all stakeholders are vigilant on global developments and specific marketing efforts are being launched by the Malta Tourism Authority after the summer season. In the words of the Minister, the recent developments continue to highlight the volatility and competitive nature of the airline and tourism industry.

The numerous shareholders of MIA now await the publication of the interim financial statements due on 17 August. Undoubtedly, these should show another record financial performance following the 9.8% growth in passenger figures during the first half of the year since passenger throughput is a key determinant of the company’s profitability. In fact, income from the passenger service charge accounts for almost 70% of overall Group revenue. The relationship between passenger figures and revenue was again confirmed by MIA on 17 May as it disclosed some key financials during the first quarter of the year. Indeed, this was the first time ever that MIA issued key quarterly financials. MIA reported that during Q1 it registered a 5.1% increase in revenue to €11.59 million while profits grew by 7.6% to €1.46 million.

Shareholders will also be very attentive to the interim dividend being declared. During the past eighth consecutive years, the company maintained a stable net interim dividend of €0.03 per share. MIA’s policy is of adjusting the final dividend once the annual financial statements are published in Q1 of the following year with a corresponding movement in the final dividend based on the profitability for the year as well as capital expenditure plans and the outlook for the year, amongst other considerations.

In February 2016, MIA had announced that the final dividend in respect of the 2015 financial year that was being proposed for shareholder approval was being reduced by 12.5% from €0.08 net per share to €0.07 per share. The final dividend paid in 2015 (for the 2014 financial year) had been somewhat of an outlier as it had surged by 77.8% over the previous year’s net dividend. MIA’s share price has corrected by 10.7% since the record intra-day high of €4.76, incidentally on the day of the publication of the 2015 annual financial statements on 24 February 2016.

Despite the record passenger movements in recent months, the decline in the share price is ample proof, once again, of the responsiveness in equity prices to dividend declarations. This is an important consideration for all companies on the Malta Stock Exchange as well as the potential new issuers contemplating an equity listing on the MSE.