Last week marked the 30th anniversary of “Black Monday”. On 19 October 1987, stock markets across the world suffered extraordinary losses amid acute levels of panic selling. The rout started in Asian stock markets, then moved to Europe and culminated in the US. On the day, the Hang Seng Composite Index in Hong Kong dropped by just over 11%. Likewise, the FTSE 100 in the UK shed 10.8% – the second sharpest one-day fall on record after the 12.2% drop posted the following day on 20 October 1987. In the US, all three major indices registered their biggest percentage single-day drops of all times on 19 October 1987 as the Dow Jones Industrial Average and the S&P 500 plummeted by 22.6% and 20.5% respectively whilst the Nasdaq Composite “only” skidded by 11.4%.

Various financial commentators argue that Black Monday was not triggered by a single event. On the other hand, the reasons for this sharp sell-off emanate from the broader macroeconomic and financial settings prevailing at the time.

Early in the 1980’s, the residual effects of the 1979 energy crisis had pushed the US inflation rate to double-digit figures, leading the then Chairman of the Federal Reserve Mr Paul Volcker to implement a tough contractionary monetary policy entailing steep rises in interest rates. At one point in June 1981, the Fed’s funds rate – i.e. the interest rate at which depository institutions lend reserve balances to each other overnight – reached an all-time high of just over 19%, effectively tilting the world’s largest economy back into recession.

As Mr Volcker’s tight monetary policy started to tame inflationary pressures and leave the desired effects, economic sentiment and confidence in the US rebounded strongly. Indeed, after reaching an all-time high of nearly 11% in November 1982, the unemployment rate fell steadily to 6% just prior to Black Monday. Furthermore, US equity markets were experiencing a five-year long bull market. The S&P 500 was up nearly 230% by August 1987 (equivalent to a compound annual growth rate [“CAGR”] of 35% per annum) whilst the Dow Jones had climbed by 250% (or a CAGR of almost 37% per annum) from the start of the bull market in mid-August 1982. Although some financial analysts were already warning that, in general, stock markets were looking overvalued, demand for equities was strongly supported by an influx of relatively new investors (such as pension funds and mutual funds) as well as a relatively accommodative monetary policy. In fact, while the Fed’s fund rate had gone up to 7.29% just prior to Black Monday from a nine-year low of 5.85% in October 1986, this was still well below the record high of 19.1% reached on June 1981.

On the other hand, however, several factors were contributing to uneasy sentiment across US stock markets. Within the US, a rising trade deficit and a softer US Dollar were fuelling expectations of higher interest rates whilst tax legislation promoting corporate mergers was being considered for abolition. Outside the US, the price of oil had collapsed amid a prolonged supply glut and lack of conformity within OPEC whilst tensions between the US and Iran spiked after the occurrence of some retaliatory skirmish missile attacks in the Persian Gulf just ahead of Black Monday.

Nonetheless, it is widely acknowledged that the main culprits behind Black Monday were very complicated “programme trading” strategies. These involved computers performing programmed orders when certain market conditions are met. One such trading strategy is “portfolio insurance” that aimed at limiting losses arising from a falling market by decreasing the overall exposure to equities (and vice versa). Another strategy was “index arbitrage” whereby software was designed to earn profits by exploiting discrepancies between the value of stocks in the cash market and the value of futures contracts.

The high speed and very large trading volumes at which certain market developments took place in October 1987 went beyond anyone’s imagination and erupted in widespread chaos as market liquidity evaporated. At the time, October 1987 was indeed the darkest period for US stock markets since the Great Depression of 1929, and it was only the intervention of the Federal Reserve that ultimately brought some stability to the market that was well running out of control. 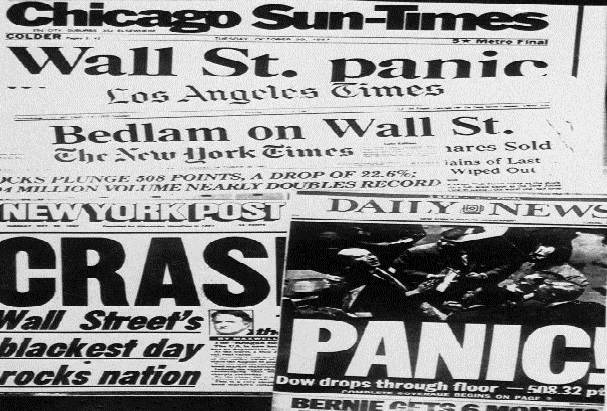 On Tuesday 20 October 1987, the Federal Reserve (headed by the new Chairman Alan Greenspan who was appointed only 2 months earlier) issued a short but very powerful statement affirming “its readiness to serve as a source of liquidity to support the economic and financial system”. Soon after, the Federal Reserve also eased short-term credit conditions mainly by conducting expansive open market operations and temporarily liberalising rules governing the lending of Treasury securities from its portfolio. In the background, the Federal Reserve also supported and encouraged banks and other credit institutions to extend liquidity support to other financial market participants (namely brokers, dealers and market makers) in order to improve overall market confidence.

The prompt response by the Federal Reserve to Black Monday not only restored proper market functioning (it took less than two years for US stock markets to surpass their previous highs) but also instilled a controversial precedent – namely the underlying belief that stock market prices are part of the central bank’s role of preserving economic stability, but only subject to preventing sharp falls in markets values rather than also averting the creation of asset bubbles (the so-called “Greenspan put”). These arguments are still heatedly debated across various international financial and economic fora today as the repercussions of the 2007/08 US subprime mortgage crisis and the euro sovereign debt crisis remain fresh in central bankers’ minds and actions.

Black Monday also underscored the significance of “globalisation” (a term still in early use during those times), the application of technology in investing, as well as the risks and dangers resulting from financial contagion. Furthermore, Black Monday sparked the introduction of revolutionary market mechanisms (technically known as “circuit breakers”) aimed at preventing rapid sell-offs by applying temporary pauses in trading activity.

Black Monday has been a major event in the history of stock markets worldwide. Today, many international financial observers question whether the present market conditions could give rise to a similar market crash as the one happened in October 1987. In many ways, the resemblances are striking – an aging bull market, high equity valuations across a range of key metrics, low volatility (the CBOE Volatility Index, known as the “market fear gauge”, recorded new all-time lows this year), a Federal Reserve chairmanship in transition (Janet Yellen’s term expires early next year), an uncertain oil sector, monetary policy tightening in the US and the rising popularity of new investment instruments (during the 1980’s it was mutual funds; today it is exchange traded funds and, more recently, investments in cryptocurrencies and blockchain technology) to mention a few examples. On the other hand, it is also important to highlight that today’s stock market structures and the regulation in place are very different and arguably more effective than thirty years ago. Nonetheless, this does not mean that sudden sharp collapses in stock markets cannot happen again. In this respect, the May 2010 ”flash crash” in the US and, more recently, the broad stock market sell-offs which took place during summer 2015 and in the early part of 2016 have been particularly intense moments during which the dangers and consequences resulting from the lack of fear in stock markets were widely demonstrated. However, regardless of whether the world could witness a repeat of Black Monday in the future is immaterial as long as market participants maintain a long-term and disciplined approach to investing.