Over the years, I regularly wrote about the performance of the Pound Sterling against the euro. Tracking this exchange rate is not only important for Maltese investors but also for various business operators, whether in the tourism industry or in the general import and export trade, given the significant impact that changes in this exchange rate has on their business performances.

In March 2015, when sterling was at a fresh 7-year high against the euro of EUR1.427 per GBP or GBP0.701 per EUR, I had stated that the biggest risk towards a continued strengthening of the Sterling was the re-election of a Conservative-led government (in the forthcoming May 2015 election) due to the strong probability that, in such an eventuality, a referendum on the UK’s continuing membership of the EU will be held in 2016 or in 2017.

I had also indicated that volatility across currency markets was expected to intensify in the run-up to the British general election due to the uncertain outcome.

The value of Sterling traded up to a fresh multi-year high of EUR1.443 per GBP in July 2015 (or GBP0.6931 per EUR) and after a brief downturn over the summer months, it then approached the EUR1.43 level once again in November 2015.

However, over the past 9 months, Sterling has suffered a decline of 18.3% against the euro and recently touched a level of GBP0.87 (on 16 August), representing the lowest level for the British pound since 2013.

During the first five months of 2016 until the Brexit referendum on 23 June, Sterling had edged lower by 3.7% against the euro and had suffered from bouts of volatility as the polls were updated from one period to the next. In fact, a few days prior to polling day, the ‘Remain’ camp was reportedly in the lead and Sterling had strengthened once again on the eve of the referendum.

The immediate market reaction on the British currency following the Brexit referendum result has been well documented in my columns and also across the international media. The referendum result was the primary factor that triggered the sizeable decline in the value of Sterling in recent weeks.

After falling by 11.3% against the euro in the two weeks following the result, the British pound hovered around the EUR1.176 or GBP0.85 level until early August. However, the stronger-than-expected monetary stimulus measures announced by the Bank of England in early August sent Sterling reeling to its lowest level against the euro since 2013.

However, before doing so, it would be wise to check the exchange rate forecasts by some of the major international analysts.

In this respect, investors should note that one global bank in particular predicts that Sterling will weaken by a further 8% versus the euro by the end of 2016 and will continue to depreciate during the course of 2017 reaching parity with the euro by the end of 2017. If this were to materialise, it would represent an overall decline of a further 14.6% from current levels.

Historically, many Maltese investors have held an exposure to Sterling in their investment portfolios. Therefore, this severe decline in the value of sterling over recent months and the potential of further weakening is naturally not positive for such investors. 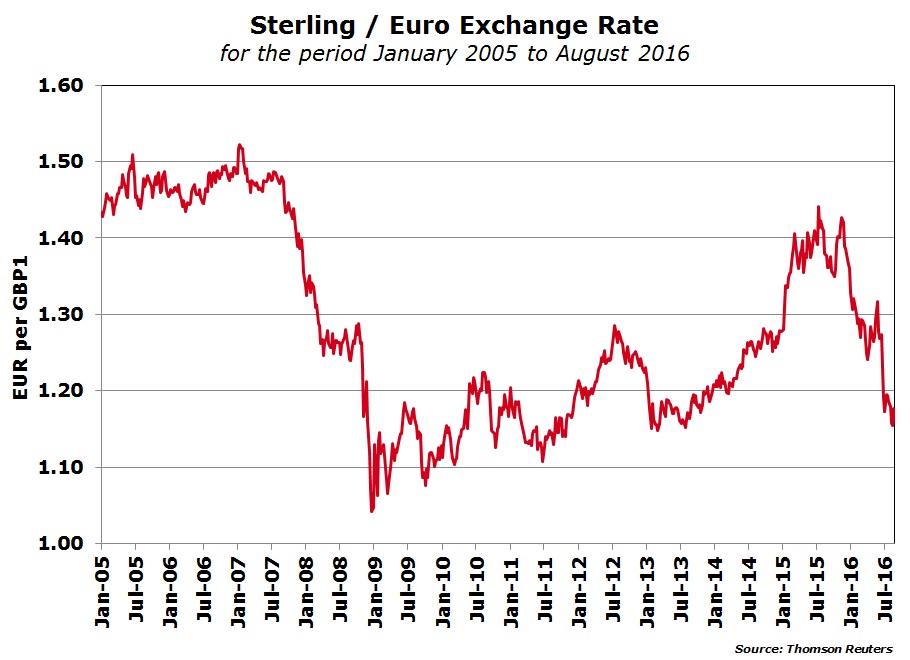 Across the securities listed on the Malta Stock Exchange, there is only one equity denominated in Sterling (6pm Holdings plc) and two debt instruments. The publication of 6pm’s interim financial statements for the first half of 2016 shows the initial impact from the downturn in Sterling on the Group’s financial performance. The 6pm Group’s reporting currency is in Sterling and the Group earns most of its revenue in GBP. However, a sizeable amount of costs are in euro since its head office is in Malta. As a result, the conversion of the cost base from euro to Sterling represents a higher level of overall costs and this was very much in evidence in the 2016 interim results. Despite the inflated cost base due to currency conversion, 6pm still reported an 18.3% improvement in pre-tax profits to GBP0.5 million. More importantly, 6pm announced that the outcome of the discussions in relation to the interest of third party investors to acquire all the issued share capital of the Company should be known soon.

On the other hand, however, for those investors who hold their GBP-denominated investments in UK Government Bonds (referred to as Gilts), the past six months was not too disappointing. Although the value of the currency weakened, Government bond prices rallied in a significant manner after the referendum result and especially following the last Bank of England meeting in early August. The overall impact for those investors having long-dated gilts was a positive one even when converting the overall value to euro since the rally in gilt prices outweighed the currency depreciation.

Other Maltese investors who do not hold a portfolio of international securities or shares in 6pm Holdings plc may therefore not feel the direct impact of such strong currency movements. However, they may still be partially exposed to Sterling via their investments in other companies listed on the Malta Stock Exchange. An example of this is RS2 Software plc. The 2016 interim financial statements revealed that during the first half of 2016, RS2 was negatively impacted by foreign exchange fluctuations, particularly by the Pound Sterling, resulting in an aggregate decrease of €1.4 million compared to the June 2015 results.

Another company that is exposed to fluctuations in the value of Sterling is International Hotel Investments plc mainly via its 50% equity stake in Corinthia Hotel London.

Sterling is undoubtedly likely to remain very volatile in the months ahead and will fluctuate depending on announcements by the Bank of England and developments regarding discussions on Britain’s relationship with the EU as well as trade agreements with other important economic partners.

Maltese investors should adopt a degree of caution when considering investment opportunities in currencies other than the euro. Increased volatility across currency markets may have a large impact on the overall performance of one’s portfolio. The sharp decline in the value of the Swiss Franc in January 2015 and the decrease in sterling in the past few weeks are just two of the more recent examples for investors to keep in mind when structuring or reviewing their investment portfolios.