The immediate reaction across international financial markets as the surprising result was announced in the early hours of 24 June was well documented across the local and international media. Global equity markets experienced a sizeable sell-off with the UK’s FTSE 100 dropping an extraordinary 8.7% as the market opened on 24 June and Germany’s DAX losing 10% of its value. Equity markets partially recovered throughout the day with the FTSE 100 closing 3.2% lower at 6,138.69 points, Germany’s DAX 30 finishing down 6.8% and France’s CAC 40 ending 8% lower. The worst hit across the EU was Greece (which plunged more than 13.4%) followed by Italy and Spain with declines of 12.4% each – the biggest ever one-day declines for these markets.

Sterling plunged in value against most major currencies, dropping by 10% to its weakest level against the US Dollar since 1985. Sterling also declined by 8% versus the Euro in the immediate aftermath of the result and by 15% versus the Japanese Yen. The British Pound had not experienced such a decline in a single day since Britain’s exit from the exchange rate mechanism in 1992.

The recovery in equity markets since Theresa May took office on 13 July has been remarkable. In the past few weeks, the FTSE 100 rallied up to 6,900 points (+12%) with Germany’s DAX surpassing 10,700 points representing an increase of 16% from its low of 9,268 points on 24 June. In the US, all three major equities indices have been reaching fresh record levels almost on a daily basis. 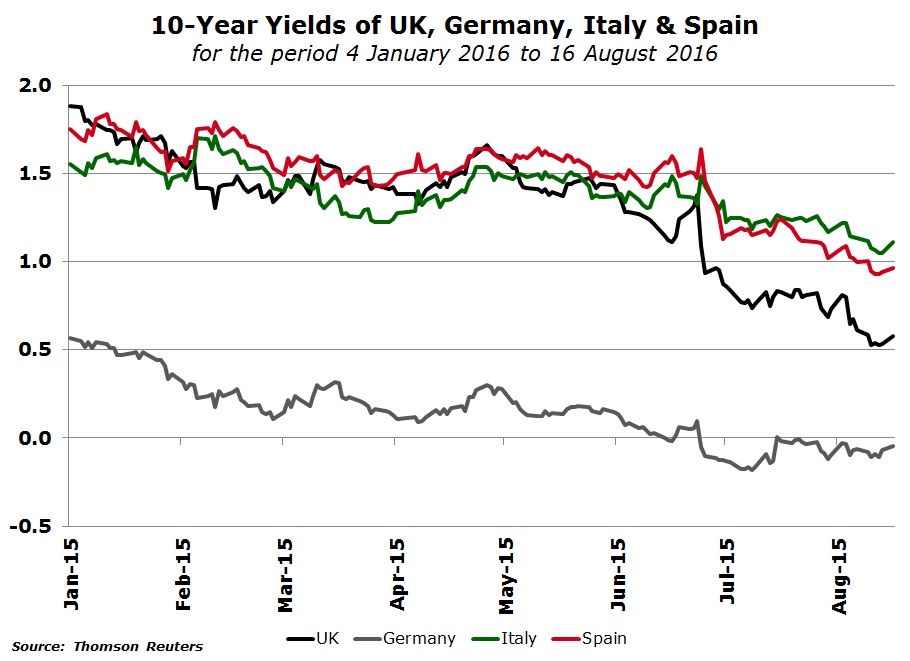 However, the remarkable developments across sovereign bond markets have probably remained unnoticed especially by many local investors. As I have explained in my regular press contributions over recent years, there is an inverse relationship between yields and bond prices. An increase in the price of a bond represents a decline in yields and vice versa. The recent downturn in yields is therefore positive news for those investors who are already exposed to the sovereign bond market.

Since the Brexit result on 24 June, yields immediately dropped heavily as the market anticipated a new package of monetary stimulus by the Bank of England to combat the weakening British economy as a result of the uncertainty arising from the decision to exit the EU.

Short-dated UK Government bonds (referred to as Gilts) maturing in 2019 and 2020 briefly traded below zero last week while the 10-year government bond yield sank to 0.51% last week from 1.5% in early June, representing a significant rally in prices of UK Gilts.

The 30-year UK Gilt dropped to an all-time low of 1.23% compared to a yield of 2.19% in June shortly before the referendum. This sharp decline in yields represents an extraordinary upturn in prices. In fact, certain international financial commentators are making observations about the return of over 30% generated by the longest-dated UK government bonds this year which makes this one of the best asset classes so far in 2016.

Yields continued to decline following the monthly monetary policy meeting of the Bank of England on 4 August as the BOE announced a drop in interest rates for the first time since March 2009 and revived the quantitative easing programme with a GBP70 billion bond-buying programme.

The extensive monetary stimulus package which exceeded market expectations created further downward pressure not only on bond yields in the UK but also across the globe. 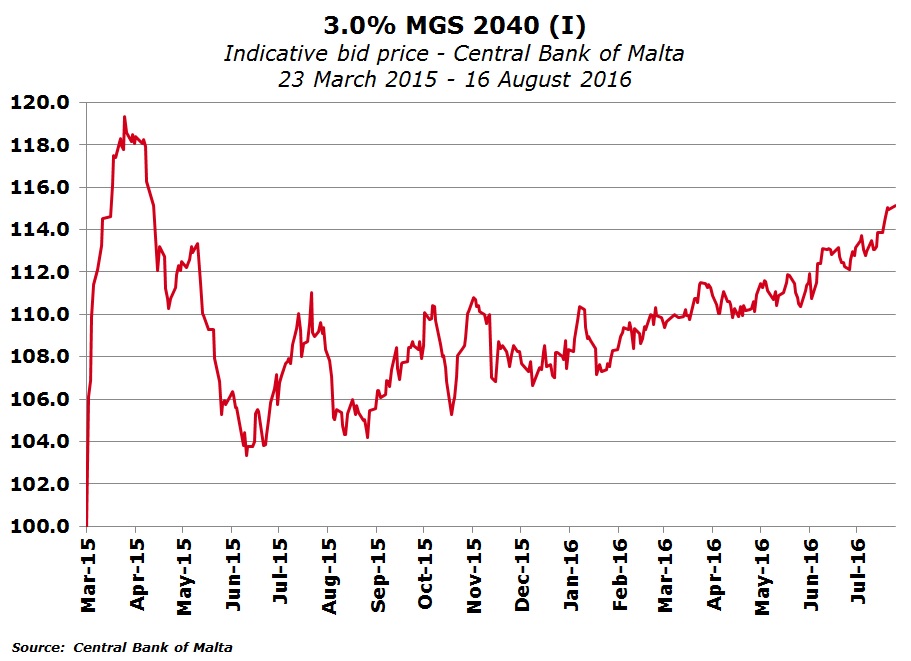 The BOE’s stimulus plan and the remarks of additional easing continued to intensify the drop in global bond yields in recent weeks. Three of the world’s major central banks are now engaged in quantitative easing – the Bank of Japan, the European Central Bank and the Bank of England.

Across the EU, the 10-year benchmark German Bund had dropped to an all-time low of -0.204% on 6 July 2016 and has remained particularly volatile since then. After recovering partially in recent weeks, it dropped back to a low of -0.121% last week. Meanwhile, across the periphery countries, the 10-year yields of both Italy and Spain hit fresh all-time lows last week. The Italian 10-year bond touched 1.051% compared to 1.368% before the Brexit referendum. Likewise, the Spanish 10-year yield dropped to a record low of 0.914% compared to 1.540% in early June and 1.781% at the start of 2016.

As I have explained in the past, the Malta Government Stock market mirrors developments across the Eurozone and in particular the peripheral countries with credit ratings similar to Malta’s. Prices of several MGS rallied in recent weeks with the majority of the medium and long-dated bonds trading up to new record levels.

This marks an almost complete reversal of the sharp downturn in MGS prices between mid-April and end of May 2015 when, in the space of a few weeks after the start of the QE programme by the ECB in February 2015, MGS prices first rallied strongly and then started to decline in a rather dramatic manner.

The volatility in the global bond markets (and also the MGS market) over the past 15 months is truly unprecedented and created a significant wealth effect which probably remains unnoticed in some cases as certain investors may have not realized about the strong double-digit gains in most Malta Government Stocks.

On the other hand, it should serve as an eye-opener to those more active investors who are well aware of these exceptional gains and who very often believe that these are normal circumstances. Bonds do not generally produce such stellar returns and this is due to the exceptional political and economic circumstances in recent years which have led to very low or negative interest rates and other expansionary monetary policy measures.

Although the imminent listing of the new 25-year MGS on offer earlier this month should prove to be another immediately profitable investment as the price is expected to start trading at well above the offer price of 101.75% when trading commences shortly, investors heavily exposed to the long-term MGS market should act with caution and get prepared for the inevitable in the future.

At some point in time in the years ahead, when economic conditions across the Eurozone and other parts of the world gradually improve and inflation starts to increase, the extended monetary stimulus measures will start being reduced by the various central banks. When markets begin to anticipate this eventuality, these extraordinary gains in the various MGS should start to unwind similar to the trend seen in April and May 2015.

Those investors hoping that these circumstances can last forever should take note of such an eventuality to ensure that they are not caught off-guard once market conditions change.