As the second half of 2016 kicked-in last Friday, a review of the performance of the Maltese equity market during the second quarter of the year as well as during the first six months of 2016 is warranted.

The equity market was characterized by weaker trading activity during the past three months in contrast to the 27.4% rise to €26.5 million experienced during the first quarter of the year. In fact, the total value of deals across the equity market during the second quarter amounted to €18.56 million representing a 1.9% decline from the comparable quarter last year.

The MSE Share Index closed minimally lower during Q2 with the 2016 year to date performance now at +2.94%.

As usual, there were some contrasting performances among the various equities listed on the MSE with FIMBank plc registering the largest upturn in Q2 (+30.2% in USD terms) and GO plc performing the weakest with a drop of 17.1%.

In fact, one of the major developments during the past few months was the launch of the voluntary public offer by TT ML Limited (a fully owned subsidiary of Tunisie Telecom) to all GO plc shareholders at €2.87 per share after Tunisie Telecom was selected as the preferred bidder. The 17% decline in the share price of GO plc over the past three months erased the 14% rise registered in the first quarter and placed GO as one of the equities in negative territory during the past six months. The sizeable drop in the share price during the second quarter is one of the major factors that impacted the MSE Share Index and possibly also contributed to lower trading activity over recent weeks.

Q2 2016 was characterized by the completion of the reporting season in April as well as by the issuance of interim statements by a number of companies to update the market on their performance during 2016. I had made specific reference to this in one of my articles in April. I had explained that following the amendment of the Transparency Directive by the European Commission and the removal of the obligation for companies to issue interim statements, it will be interesting to see how Maltese listed companies will ensure that consistent newsflow is forthcoming to the market.

It is positive to note that a number of companies followed international market practice and issued such trading updates. I believe this is one of the major factors which led to the 30% increase in the share price of FIMBank over recent weeks on particularly strong trading activity with over 2.26 million shares changing hands. FIMBank reported that it registered profits in each of the first five months of 2016 as it continued to vigorously pursue the implementation of cost control measures.

The two largest companies listed on the MSE, Bank of Valletta plc and HSBC Bank Malta plc, had a largely uneventful quarter. Both equities registered minimal movements. BOV’s share price dipped by a mere 0.2% but it is still up by 3.5% during the first half of 2016 while the share price of HSBC edged 1% higher. Notwithstanding this, HSBC’s equity is still showing a decline of 9% during the past six months. The most notable movement is the decline in trading activity in BOV shares during the past few months to 1.42 million shares compared to 2.47 million shares in the first quarter of 2016 and 1.96 million in the second quarter of 2015.

Another observation that can be highlighted from the developments over the past six months is the decline in a few share prices from their recent record levels. The equity of Malta International Airport plc had raced up to a high of €4.76 in mid-February 2016 ahead of the publication of the 2015 annual financial statements. However, the share price has declined by 10.7% since then possibly as a result of the reduction in the final dividend to shareholders. Meanwhile, MIA continued to report record passenger traffic on a monthly basis and it is remarkable that the company has been registering record traffic for the past 50 consecutive months. The increase of 10.4% in passenger traffic during the first five months of 2016 augurs well and undoubtedly places the company in a strong position to exceed its original passenger forecast of an increase of 2.4% for 2016.

Likewise, the share price of RS2 Software plc has failed to regain its all-time high of €4.06 which was registered on 11 March 2016. During the second quarter of the year, the equity registered a loss of 1.5% and although trading activity remained robust at just over 1.2 million shares, it is still far lower compared to the extraordinary volumes registered in the first quarter of the year of almost 1.95 million. 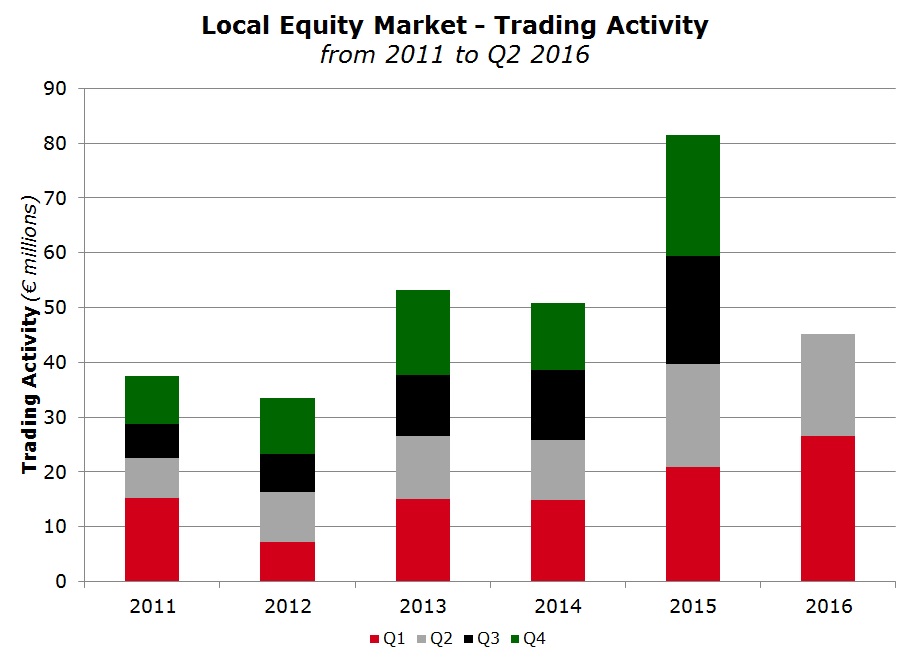 The Annual General Meeting of RS2 held in mid-June was somewhat different to what many local investors are normally accustomed to. In their respective presentations, both the Chairman as well as the CEO made little reference to the performance and achievements in 2015. Instead, the theme of the AGM was the globalization of the Company as it aims to expand into the Asia-Pacific region as well as in the US. RS2’s Chairman Mr Mario Schembri made particular reference to the growing business pipeline in various parts of Asia, namely Vietnam, Singapore, Thailand and Indonesia. In the US, the CEO Mr Radi El Haj explained that the plan is to grow inorganically. The non-Executive Director Mr John Elkins also addressed those present at the AGM and confirmed that RS2 has attracted a lot of interest from potential clients in the US. Meanwhile, the CEO argued that acquisitions or mergers with companies with complimentary technology is the focal point of the company’s strategy in order to allow a faster entry into the US market.

Due to new debt financing plans as well as obligations of equity issuers who also have bonds listed on the MSE, a number of companies published their financial projections in recent weeks not only for 2016 but in some cases also for future years.

The most interesting development was that of Medserv plc. After it issued its 2016 financial projections in mid-May, Edison Investment Research of the UK published its initial report of Medserv providing the market with Edison’s in-house projections for the company for 2017.

6pm Holdings plc initially disclosed some key financial projections for 2016 during its Annual General Meeting which took place on 21 June. Its detailed projections were then published towards the end of the second quarter of the year. In the coming months, shareholders of 6pm will be particularly attentive to announcements related to the interest by a number of investors to launch a voluntary bid for the acquisition of all the issued share capital of 6pm subject to a successful due diligence exercise which was permissible following an Extraordinary General Meeting which took place on 28 April. This was one of the reasons behind the continued upturn in the share price by a further 11.8% during the second quarter of the year.

International Hotel Investments plc, MIDI plc and GlobalCapital plc also published their financial projections as a result of new bond issues launched during the second quarter of the year.

Looking ahead, the interim reporting season commences tomorrow with the publication of results by Plaza Centres plc and continues until the end of August which is the deadline for companies with a June half year-end to disclose their interim financial performance.

In the interim financial reports being published in the coming weeks, it would be particularly interesting for investors should a number of companies provide more guidance on future developments including specific references to the possible impact of Brexit on their financial performance. Some companies are particularly susceptible to sterling movements and therefore this must be taken into consideration by equity investors.