In the indicative calendar published by the Malta Government Treasury on 5 January, it was stated that the amount of issuance in Malta Government securities during 2017 will not exceed €600 million. This is very much in line with the annual issuance over recent years. The Treasury raises funds via the issuance of Malta Government Stocks and Treasury Bills to finance both the budget deficit (estimated at €128.3 million for 2017) and also to refinance stocks maturing during a particular year (amounting to €371.8 million in 2017) apart from making changes to the Government’s debt portfolio in line with its debt management policies.

The Treasury normally issues new Malta Government Stocks four times a year and the first issue of 2017 took place in mid-February. The prices of the three new Malta Government Stocks were announced on 8 February and the offer period for retail investors took place between Monday 13 February and Wednesday 15 February. Meanwhile, tenders in the form of sealed bids for amounts over €100,000 nominal (generally utilised by institutional investors) were accepted until Monday 20 February.

On Monday 20 February late afternoon, the Treasury announced that it received 1,186 applications for the three new Malta Government Stocks for a value exceeding €282 million (nominal). The total aggregate amount on offer was of €130 million subject to an over-allotment option of up to a further €90 million, implying a total of €220 million.

The more interesting analysis that emerges from the statistics published by the Treasury is the level of demand from the retail investors as opposed to institutional investors.

Subscriptions from retail investors at the fixed offer prices amounted to only €19.1 million (nominal) with the majority being submitted in the 2.2% MGS 2035 (I). Naturally, all these applications were met in full. The total demand of less than €20 million contrasts sharply with the record demand of €443 million in February 2015 and other high levels of applications by retail investors in the various MGS issues over the past two years.

Apart from the €19.1 million allotted to a number of retail investors, the Treasury also allotted a total of €163.76 million (nominal) to institutional investors with the large majority in the shortest-dated bond.

Although the total demand exceeded €282 million, the total amount issued across the three MGS’s of €182.87 million was below the maximum permissible amount of €220 million. This may not be evident to many investors who do not follow the capital markets closely. However, the very low demand from retail investors on the one hand, as well as the fact that the Treasury did not manage to raise the maximum of €220 million are important factors which may have wider repercussions going forward.

On most occasions during the past two years, demand from retail investors was so large that each of the offers was over-subscribed by the thousands of retail investors even before the auction process commenced. Since retail investors crowded out institutions, the tenders were cancelled and institutions were not able to participate in most of the primary market issues. So why was it different this time round?

As I had explained in some of my articles over recent months, the strong take-up over the past two years was primarily a result of the demand by investors for speculative reasons due to the sharp upward movement in MGS prices. However, although the same pattern emerged in the previous MGS issue in October 2016, (the price of the 2.1% MGS 2039 initially rallied above 106% when trading commenced during the first week of November), it then quickly dropped back towards the issue price of 102.50% and also below par value (100%) in subsequent weeks. 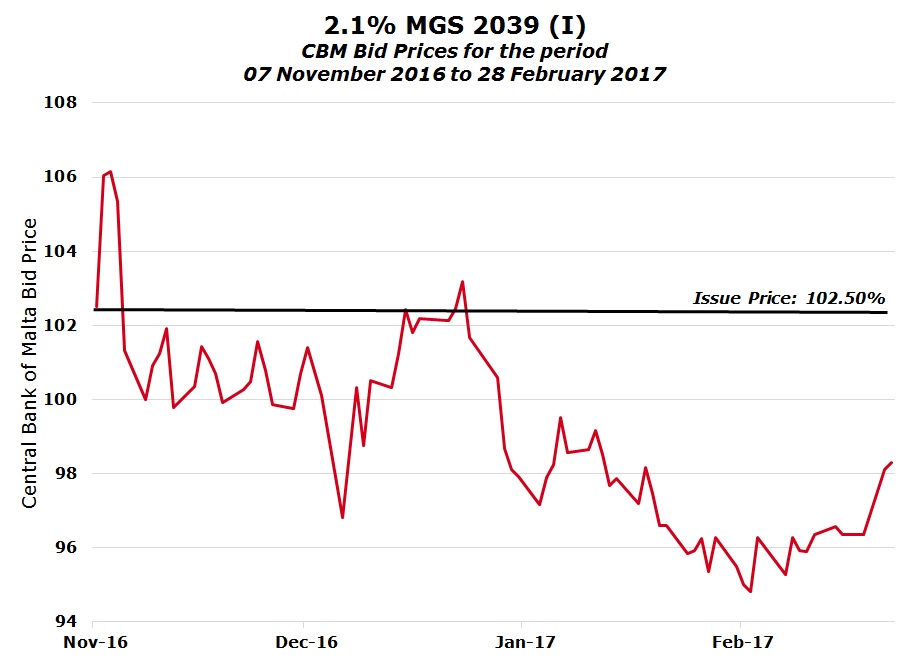 Due to the sudden downturn in MGS prices, many investors did not manage to exit their positions of the 2039 issue in time to capitalise on the initial capital gain. As such, one of the main reasons behind the weak demand a few weeks ago was due to the fact that these investors were not able to liquidate their holdings at a profit over the past two months and again subscribe for the new bonds on offer.

Moreover, one must also not underestimate the psychological impact that this changing trend must have caused. Apart from the fact that the price failed to sustain its initial rally (in contrast to the trend over the past two years), the decline in the price of the 2.1% MGS 2039 to below par value (100%) together with the longest dated MGS (maturing in 2041) has also taken many retail investors by surprise. Despite warnings from various quarters in the past in this respect, many retail investors never really acknowledged that this may indeed be possible.

So what are the alternative investment opportunities for retail investors? Although some investors have been enquiring about the timing of the launch of the new Malta Government Savings Bonds for pensioners (expected in the second half of 2017), most retail investors who are generally interested in fixed income securities for regular income generation (as opposed to speculative price gains) could now shift their attention to the corporate bond market. Various investment opportunities are expected in this asset class in the months ahead with a reportedly strong pipeline of new and existing issuers seeking to raise debt funding. However, investors must always keep in mind that there is a greater credit risk when investing in corporate bonds as opposed to MGS. Moreover, the level of creditworthiness varies from one issuer to another and I recently explained another important metric for investors to look out for before investing in the various new corporate bonds expected to be launched. It is therefore very important that investors obtain professional advice and assistance in analysing the ability of the different issuers to honour their obligations.

Following the weak demand for Malta Government Stocks from retail investors and assuming current circumstances remain unchanged, the Treasury will become very much dependent on institutional investors to raise the overall level of funding required for 2017. This may indeed result in higher yields on the secondary market which should naturally also impact the prices of existing MGS already in issue. These are indeed very different conditions to what investors have experienced in the past few years.