Following the positive performances by the Maltese equity market in 2015 (+33%) and 2016 (+4.5%), the MSE Equity Price Index drifted lower by 2.63% in 2017 as the share prices of twelve equities declined. These included double-digit losses from seven companies, mainly those involved in the financial services sector namely Bank of Valletta plc, Mapfre Middlesea plc, FIMBank plc and GlobalCapital plc. On the other hand, only seven equities performed positively during 2017 with four of these registering double-digit gains.

In a nutshell, the five main highlights that characterised the Maltese equity market in 2017 were: (i) the launch of the MSE Total Return Index; (ii) the extension of trading hours; (iii) the Initial Public Offering of PG plc; (iv) the largest ever corporate action with the €150 million rights issue of Bank of Valletta plc; and (v) the delisting of the equity of 6pm Holdings plc.

A very important development during 2017 was the extension of the trading hours on the Malta Stock Exchange. As from 18 April 2017, trading hours doubled from 3 hours per day to 6 hours and in my view this ought to have been one of the factors that contributed to the sharp increase in trading activity in 2017. The total value of equity market activity during the past twelve months amounted to €87.98 million – an increase of 13% over the previous year and the highest level of activity since 2006. The increase in activity was particularly evident during the second half of the year.

Another major development for the equity market was the Initial Public Offering (IPO) of PG plc – the first IPO since that of Tigne Mall plc in 2013. The offer of 27 million shares at €1.00 each was made by Mr Paul Gauci and the demand from the investing public was overwhelming. As trading commenced on the secondary market on 4 May, the share price rallied by 29% within the first five days on very high levels of trading activity. PG ranks as the second best performing equity in 2017 with a gain of 40%. PG’s financial year end is 30 April and on 20 December the company published its interim financial statements while a few days earlier it also distributed its maiden dividend in line with its commitment at the time of the IPO.

The €150 million rights issue by BOV was also a very important highlight of 2017. Following the conclusion of the rights issue, the market capitalization of BOV increased to over €900 million. BOV is now by far the largest company on the MSE and hence any movements in the share price of BOV have a much larger impact on the equity indices that are used to track the performance of the MSE. BOV’s equity had a mixed year and between January and April 2017 it registered four consecutive monthly gains reaching an over nine-year high of €2.27 by early May. However, as the bank’s plans for the issuance of new shares through a rights issue started to become clearer, the share price registered monthly declines for six consecutive months between May and November 2017 until reaching a near three-year low of €1.74 on 5 December 2017. The equity closed the year at the €1.80 level, representing an overall yearly decline of 13.9%.

The shares of 6pm Holdings plc were delisted in July 2017 following the takeover of Idox plc earlier in the year. However, in August, 6pm announced that the publication of the 2016 Annual Report was delayed and the bonds were suspended from trading. Although the 2016 Annual Report was eventually published, the bonds remained suspended as the 2017 interim financial statements have never been issued. The serious shortcomings indicated in the Annual Report including the restatement of the financial statements of previous years instigated Idox plc to write to all bondholders stating that 6pm will continue to honour its financial obligations through a guarantee being provided by Idox.

On a more positive note, the double-digit gains by Simonds Farsons Cisk plc and Malta International Airport plc should be very welcoming news for shareholders.

The equity of Farsons reached an all-time high of €9.69 in early November 2017 as the company continued to generate record results (partly reflecting the impressive tourism numbers in 2017) and ahead of the much-awaited spin-off of the property company Trident Estates plc. However, in a very surprising announcement on 9 November, Farsons announced that the Board of the Planning Authority voted against the recommendation of the Planning Directorate for the approval of a permit to construct the Trident business park. 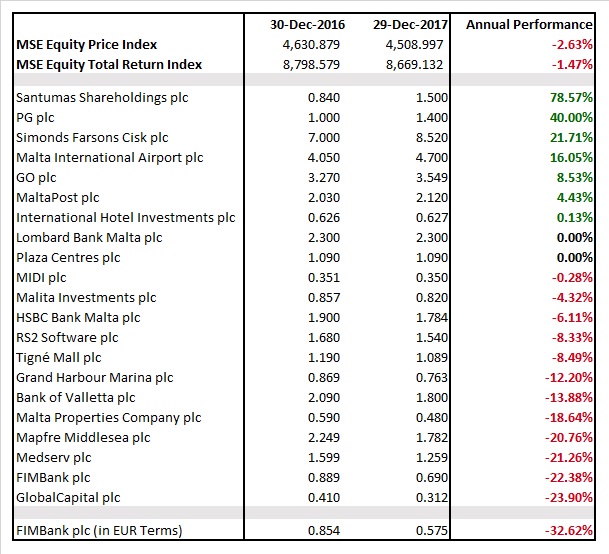 Farsons issued another announcement the day after confirming that following this unexpected development, it put into abeyance the plan to spin‐off the company’s shareholding in Trident Estates plc and the subsequent listing of Trident on the Official List of the Malta Stock Exchange. The share price of Farsons sunk by 12% following these two announcements. In a subsequent turn of events, Farsons issued another announcement on 7 December informing the market that the Planning Authority Board unanimously approved the business park permit. Subsequent to this announcement, Farsons declared a net interim dividend of €1.2403667 per share on 20 December 2017 which will be settled ‘in kind’ through the distribution of the shareholding in Trident. As such, shareholders of Farsons as at close of trading on 19 December 2017 will soon be receiving one share in Trident for every share held in Farsons (identical to the spin-off process of Malta Properties Company plc from its previous parent company GO plc). Despite the 10% decline in the last few weeks of the year, the equity of Farsons was the third best performer in 2017 with a gain of nearly 22%.

The share price of MIA surged by over 16% in 2017 as the airport operator continued to register successive record passenger movements amid a booming tourism market which also had a positive impact on the company’s financial performance. The share price of MIA registered an all-time high of €4.80 in late October 2017 before partially retreating to end the year at €4.70. It is also worth highlighting the very high level of trading in the shares of the airport operator. During the past twelve months, a total of 2.78 million shares changed hands for a value of €11.98 million – the second most actively traded equity after BOV and representing 13.6% of the overall activity across the equity market.

Subsequent to the eventual listing of the 30 million shares in Trident Estates plc due on 30 January 2018, investors should expect another two corporate actions in the coming months.

At FIMBank’s Annual General Meeting on 11 May 2017, the bank obtained approval from shareholders to carry out “one or more rights issues over a period of three years to raise in aggregate a minimum of USD100 million”. The resolutions were approved and shareholders now await details and timing of the first rights issue. Following the strong gains registered in 2015 (+21%) and 2016 (+41.8%), FIMBank’s share price plunged by 22.4% in 2017 possibly in anticipation of the upcoming capital raising exercise. Likewise, GlobalCapital plc, which ranks as the weakest performer in 2017 with a decline of 23.9%, had convened an Extraordinary General Meeting in May 2017 to conduct a €15 million rights issue subject to the approval of the Listing Authority. However, on 28 December the company issued a further announcement explaining the background behind the postponement of the rights issue (now expected in the second half of 2018) until the required capital underpinning its renewed business strategy has been adequately defined in the light of the evolving business and regulatory environment.

Another important corporate action that should take place in 2018 is the long outstanding resolution to the change in the largest shareholder of Lombard Bank Malta plc. The indicative timelines published in the first half of 2017 revealed that a share purchase agreement should have been signed by 24 July. Unfortunately, Lombard Bank Malta plc have not yet provided an update to the market on the ongoing sale of shares and one hopes that the market will soon be updated on the new envisaged milestones.

Following the success of PG plc, 2018 should also see other IPO’s being launched on the main market.