The first quarter of the year came to an end last Thursday. It was a rather eventful period across international financial markets largely dominated by increased volatility across all asset classes amid various developments taking place simultaneously.

Although concerns regarding the COVID-19 pandemic began to ease at the start of the year, financial markets still had to deal with the aftereffects of the virus. Indeed, as the Federal Reserve changed its views on inflation by abandoning the “transitory” mantra, the central bank quickly had to roll out an aggressive interest rate hike plan along with balance sheet size reduction. This was shortly afterwards followed by the war in Ukraine. Apart from the calamity from a humanistic perspective, it also accelerated the rapid rise in prices as also evidenced by the surge in commodities such as oil, gas and nickel.

Across equity markets in the US, the S&P 500 index ended the first quarter of the year with a decline of almost 5% while the tech-heavy Nasdaq Composite slumped by 9.1%. The other principal American equity index – namely the Dow Jones Industrial Average – fared better as it slipped by 4.6% reflecting the performance of some of its constituents which are widely labelled as ‘value’ stocks. As such, this was the first quarter of losses for the S&P 500 since the first quarter of 2020 which at the time was hugely negatively impacted by the onset of the pandemic.

Although the S&P 500 ended the quarter with a relatively small loss when considering the wider context, on the other hand it is worth highlighting the volatile movements in equity prices from one day to another, and from one week to the next. Moreover, the decline in the S&P 500 would have been much sharper were it not for the remarkable rally which ironically started on the same day as Russian military forces invaded Ukraine. In fact, after dropping by 5.3% in January, the S&P 500 index plummeted by a further 9% in February until the start of the Russian military incursion in Ukraine which took place on 24 February. On the day, the S&P 500 touched a Q1 2022 low of 4,114.65 points which was 13.7% lower than the level of 4,766.18 points as the end of 2021. In addition, as the benchmark US index had recorded an all-time high of 4,818.62 points on 4 January, it entered into ‘correction’ territory which essentially refers to when an index or a share price falls more than 10% from its most recent high.

Since the Q1 2022 low recorded on 24 February, the S&P 500 staged an impressive comeback of almost 13% to above 4,600 points before easing on the final two days of March to close the quarter at 4,530.41 points. This took place despite the highly uncertain economic environment across the world. Apart from the ongoing war in Ukraine, investor sentiment in recent weeks was also impacted by the newest strain of COVID-19 as well as the more tangible prospects of stagflation.

Unsurprisingly, the best performing sector within the S&P500 index during Q1 2022 was energy with an upsurge of almost 38% on the back of the considerable increases in the prices of oil (+38.7%) and natural gas (+51.3%). The only other positive performing S&P 500 sector during the quarter was utilities which added 4%. In contrast, all other 9 sectors registered losses.

In the euro area, equity markets performed worse than US indices in Q1 2022 as a result of the more direct impact from the war in Ukraine compared to companies headquartered in the US. In fact, the Euro Stoxx 600 ended the first quarter with a decline of 6.5%. Similar to the trends seen across the S&P 500,  the European equity benchmark index also recovered strongly from the Q1 2022 low registered on 7 March. Since then, the Euro Stoxx rallied by 12.4% although most sectors within the index still ended the quarter in negative territory particularly retail, technology, and industrial goods and services which all shed more than 12% during the first three months of 2022.

On the other hand, the UK’s FTSE 100 Index gained 1.8% in the first three months of the year thereby outpacing all major equity markets as a result of the high exposure within the index to energy and mining/resources companies such as Shell, BP, BHP Billiton, Rio Tinto, and Glencore. 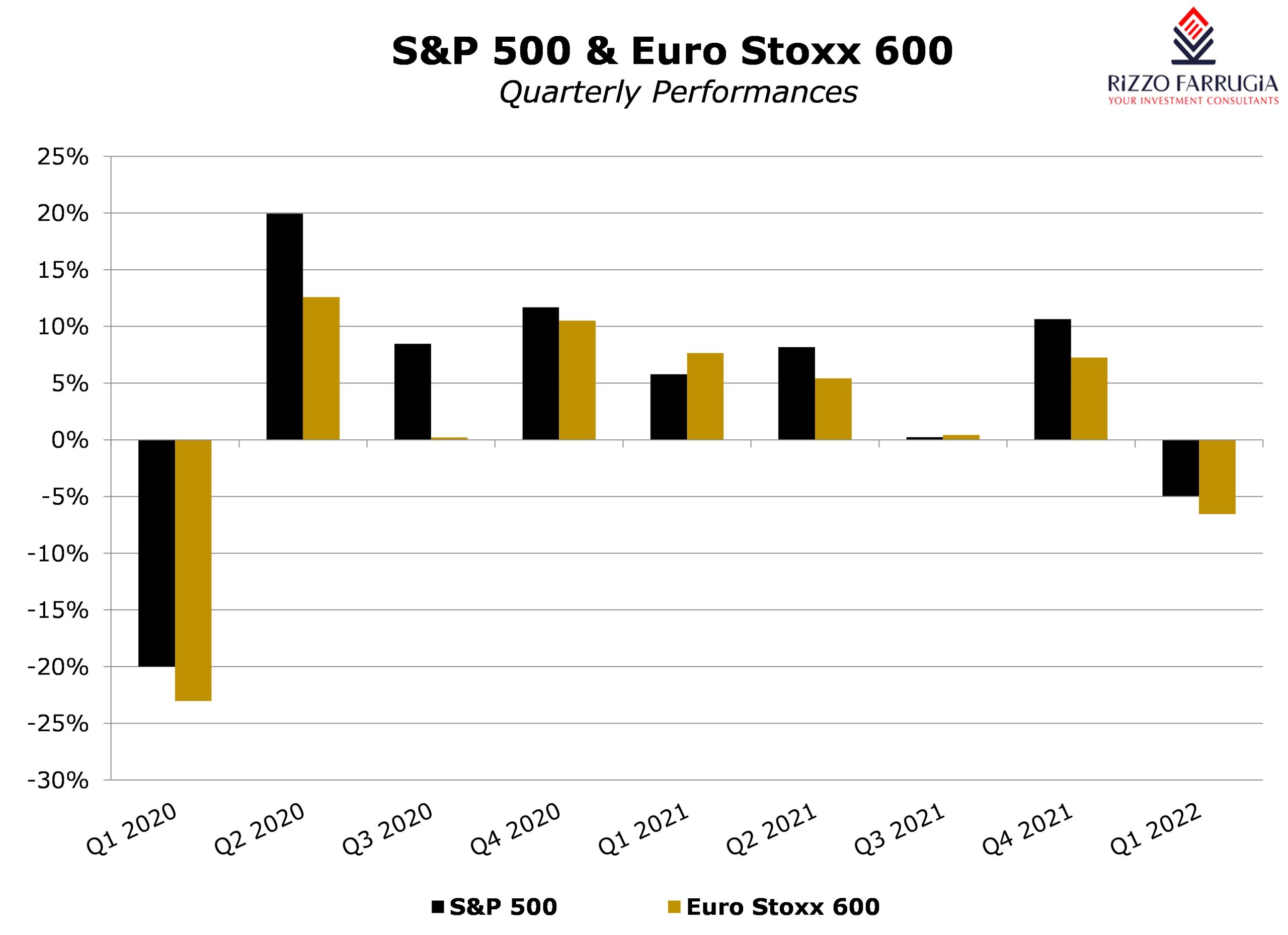 Meanwhile, international bond markets performed very badly during the quarter as surges in prices in most major economies brought about a consensus view that most central banks will need to raise interest rates aggressively. In fact, the 10-year US Treasury yield broke the 2.5% level by 28 March compared 1.5% as at the end of 2021, thus contributing to the worst quarter for US sovereign bonds since at least 1973. The dismal performance for the US government bond market came after the Federal Reserve raised interest rates in March for the first time since 2018 in an attempt to battle inflation (which is running at its highest level in 40 years) and as it halted its crisis-era bond-buying programme. Most investment banks agree that several more interest rate hikes will be announced by the Federal Reserve during the course of 2022 with some indicating a total of eight hikes of 0.25% each in view of the elevated level of inflation.

Although the European Central Bank did not raise interest rates, the 10-year German Bund yield also moved sharply higher in tandem with the developments across the US bond market and also in view of the recent statements by the ECB that it will be scaling back its bond-buying programme earlier than planned. The benchmark 10-year eurozone yield jumped to a high of +0.74% recorded on 29 March compared to -0.18% at the start of the year and a recent low of -0.62% in early January 2021. Going forward, the prospects of further normalisation in yields is expected to gain additional momentum as the latest data indicate strong increases in consumer prices following the record inflation of 7.5% recorded in March, thereby placing further pressure on the ECB to tighten its ultra-loose monetary policy faster than planned.

The upward movement in eurozone bond yields was also reflected across the Malta Government Stock market. The yield of the 10-year MGS jumped to 1.56% compared to 0.8% at the start of the year and a recent low of 0.3% in January 2021. In view of the inverse relationship between movements in yields and bond prices, the sharp upturn in MGS yields resulted in a very negative performance across the MGS market. The RF MGS index ended the first quarter of the year with a decline of 5.4%. The price of the 10-year MGS, the 4.45% MGS 2032, declined by over 9 percentage points reflecting in excess of 2 years of interest. The price of a longer-dated bond, the 3.00% MGS 2040, suffered a decline of almost 12 percentage points which is equivalent to more than four and a half years of interest payments. Few investors may realise the extent of such a negative performance in the local ‘risk-free’ benchmark.

In view of the fluidity of the geopolitical tensions and its impact on inflation figures which influences decisions by the major central banks, it is indeed difficult to predict the performances of equity and bond markets in the months ahead. What is certain is that the intense volatility that marked the first three months of the year is likely to remain intact also in the near term. Investors may well continue to rotate out of bonds and into the equity market as a better hedge against inflation especially given the improvement in earnings growth across the US market. After all, as most successful investors have opined for a while, owning shares is one of the best long-term inflation hedges.