Berkshire’s shareholders meeting – formerly called the “Woodstock for Capitalists” – is a widely anticipated event due to the very active participation from the large number of shareholders who travel to Omaha, Nebraska purposely for the occasion.

This year’s meeting occurred in the midst of a marked downturn in equity markets as the S&P 500 index shed 8.8% during the month of April bringing the year-to-date performance to -16%. Meanwhile, the share price of Berkshire Hathaway gained nearly 8% during the first four months of 2022. Although Berkshire was widely criticised in more recent years for underperforming the market mainly due to its under-exposure to technology companies, it is worth highlighting that Berkshire’s value has risen by an extraordinary 3 million per cent over the past six decades.

Despite the strong outperformance once again of Berkshire Hathaway in recent months and their unbelievable track record since 1965, Warren Buffett and Charlie Munger both argued against the concept of market timing and voiced their concern for the recent surge of high frequency trading activity across the US markets that resembled more a “gambling parlour” than investing. Buffett reiterated his belief that investment decisions should solely be based on the assessment of the business fundamentals and the quality of a company’s management. If these are considered to be excellent, the company should then generate suitable returns to shareholders over time. This contrasts with the idea of many retail investors who purchase shares simply because of their belief that the price will move up relatively quickly due to market sentiment. Essentially, Warren Buffett has excelled over the years at buying an entire company or a sizeable stake in a company when he perceives this to be opportune given the price dynamics and company fundamentals. He does not consider himself good at timing the market. In fact, Buffett explained that during the global financial crisis in 2008, he had acquired several large stakes too early and he would have made more money had he waited a further six months as equity markets had reached their low-point in March 2009. However, he said that such a fact was only evident in hindsight. Warren Buffett regularly claimed that trying to forecast the swings in the market is just as bad as gambling in it.

As inflationary forces ensnare the global economy, it is no surprise that Warren Buffett commented on inflation during the recent meeting with Berkshire shareholders. He stated that it “swindles almost everybody” as it pulls down equity and bond prices but also reduces the value of any uninvested cash holdings, since it ultimately erodes purchasing power. In such circumstances, Buffett believes that the best hedge against inflation are equity holdings in companies which require low capital expenditure and have pricing power capabilities that enable them to pass on the additional costs to customers.

Warren Buffett also reiterated his belief that holding Bitcoin and other cryptocurrencies cannot be considered as an investment since they are not ‘productive assets’ like farmland or other real estate that can offer regular income streams. 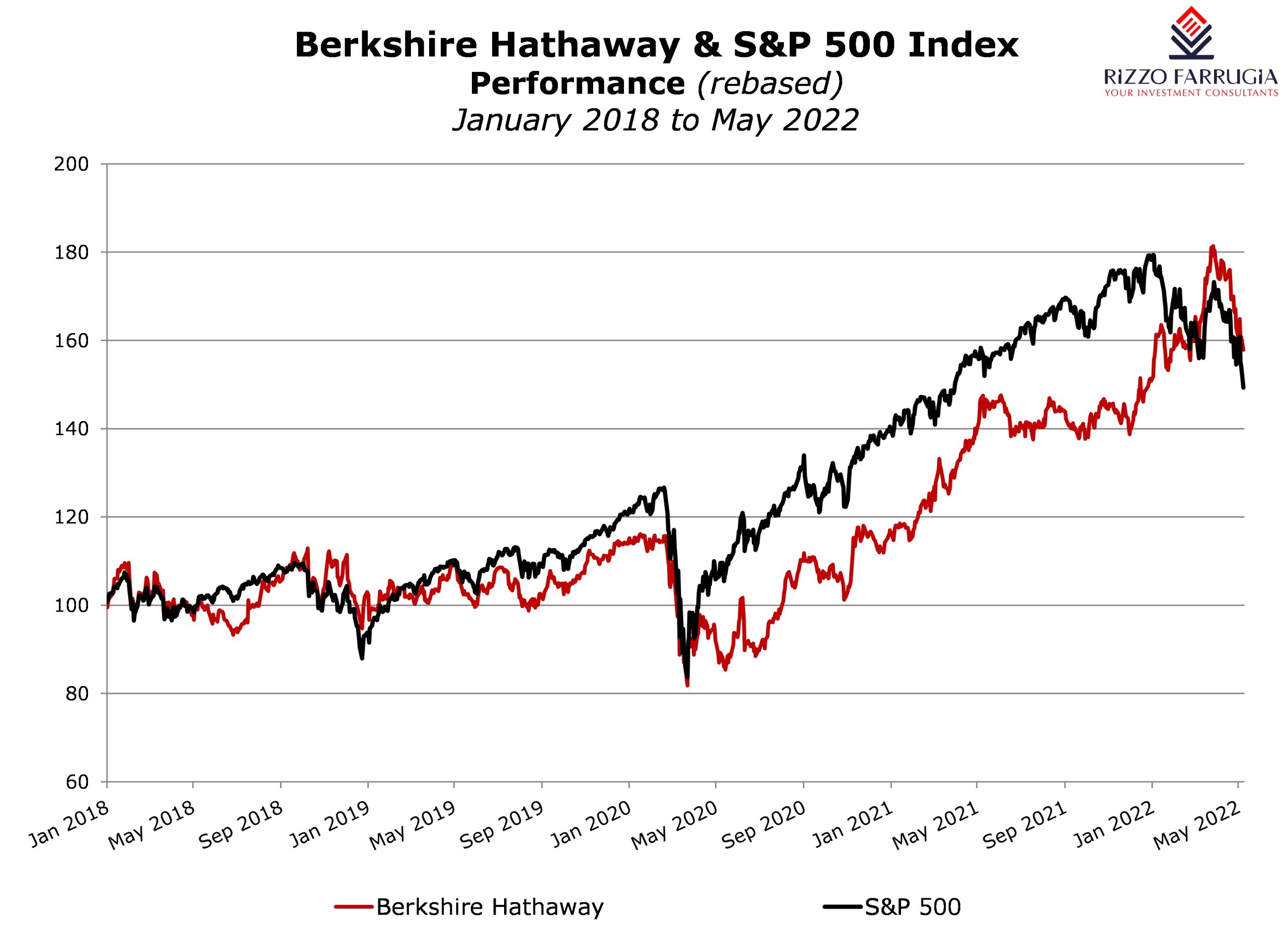 Productive assets produce something tangible and therefore have a value according to Warren Buffett. Meanwhile, Charlie Munger stated “in my life, I try to avoid things that are stupid, and evil and make me look bad in comparison with somebody else”. He added that “Bitcoin does all three” at once.

After noting in February’s letter to shareholders that there is “little that excites us” in the market, a number of opportunities presented themselves over the following weeks amid the sharp downturn across equity markets. In March, Berkshire revealed a 14% (USD7 billion) stake in oil giant Occidental Petroleum just as equity markets declined on the news of the Ukraine invasion on 24 February.

Despite the widespread concerns over recent weeks about the health of the global economy with recession fears being raised almost on a daily basis, during the first quarter of 2022 Berkshire Hathaway embarked upon its largest stock market spending spree in more than a decade as it invested a total of USD51 billion.

Following the large stakes accumulated in Occidental Petroleum, it was revealed that the investment vehicle also accumulated sizeable holdings in HP, Chevron and Activision Blizzard.

Berkshire Hathaway had also announced the USD11.6 billion acquisition of the insurance conglomerate Alleghany Corporation – its single largest acquisition since 2016.

Despite these investments – coupled with the USD3.2 billion spent on share buybacks during the quarter – Berkshire still held a cash balance of USD106 billion at the end of March. Warren Buffett said he always wanted Berkshire Hathaway to be in a position to operate “should the economy stop”.

The news that Berkshire Hathaway invested such a sizeable sum in various companies at a time when the equity markets are in ‘correction’ territory is another timely reminder on the investment philosophy of one of the most successful investors ever. While retail investors may be finding it hard from a psychological aspect to digest the news regarding the sharp downturn in equity markets, Warren Buffett is instead regarding this as a good entry point. After all, one of his famous quotes is “be fearful when others are greedy, and greedy when others are fearful” portraying the contrarian view on stock markets.