Over the past two weeks I provided highlights of the earnings of companies on the Malta Stock Exchange that published their interim financial statements.

While the regulatory obligation in Malta is for equity issuers to publish their financials on a semi-annual basis, the requirement across the larger international financial markets is for companies to publish their results on a quarterly basis.

The international financial media provides deep coverage of the earnings announcements by these companies and there is generally a lot of hype surrounding the publication of results of the very large multinationals who invariably always provide detailed guidance to financial analysts. This custom was somewhat dented at the start of the pandemic as various companies opted to reduce their forward guidance in view of the uncertainties brought about by the virus.

As such, in recent weeks there was ample publicity given to the Q2 reporting season and it is therefore worth highlighting the key trends in the results of the largest technology companies in the US. The five largest technology companies — Apple, Amazon, Alphabet, Microsoft and Facebook — account for 22% of the S&P 500 Index and as such the results and share price performance of these five companies play a large part in the overall trend of the S&P 500 and sentiment towards the technology sector.

Apple reported that during the third quarter of their financial year to 30 June 2021, overall revenues surged by 36% to USD81.4 billion, beating the analyst consensus by a wide margin as iPhone sales jumped by 50% to USD39.57 billion. Although the US is still the group’s largest market accounting for 44.0% of net sales (equivalent to over USD35.9 billion), the largest improvement during the last quarter was from China with a jump of 58% in sales to USD14.8 billion. Net profits during the last quarter jumped 93% to USD21.74 billion. The company however warned that component shortages would hit sales of its iPhones and iPads during the fourth quarter of their financial year between 1 July and 30 September although it is still expecting a strong double-digit increase. Apple also indicated that revenue growth from its ‘services’ segment would slow from that reported in the last quarter when revenue rose by 32.9% to USD17.5 billion.

Amazon’s Q2 results published on 29 July showed overall revenue of USD113.1 billion representing a growth of 24% compared to the second quarter last year. Geographically, North America experienced a 21% increase in net sales to USD67.6 billion (representing 59.7% of total revenue) resulting in operating profits of USD3.1 billion (+47%). The ‘international’ segment reported sales of USD30.7 billion (+27.2%) and operating income of USD362 billion. Meanwhile, the Amazon Web Services (AWS) segment generated sales of USD14.8 billion (+37%) and operating income of USD4.2 billion (+25%). Overall operating income increased to USD7.7 billion in the past three months (with AWS accounting for almost 55% of operating income) compared to USD5.8 billion in Q2 2020. Amazon’s overall profitability also improved by 48% to USD7.8 billion during the second quarter of 2021 – the second most profitable quarter ever experienced by Amazon. The company indicated that during the third quarter of their financial year, revenue is expected to be between USD106 billion and USD112 billion (10% to 16% growth compared to the same quarter last year) with operating income anticipated to reach between USD2.5 billion and USD6.0 billion.

Alphabet Inc, the parent company of Google, announced a better-than-expected 62% jump in revenue to USD61.88 billion during the second quarter ended 30 June 2021 as Google advertising revenue rose nearly 70% to USD50.44 billion and YouTube’s advertising revenue soared 84% to USD7 billion compared to the same quarter last year. Google Cloud (a business line in competition against Amazon and Microsoft) also reported strong growth as revenue rose more than 50% to USD4.62 billion. Alphabet’s profitability rose more than two-and-a-half times to USD18.52 billion with the operating profit margin rising to 31% compared to 17% in Q2 2020.

During the fourth quarter of their financial year between April and June 2021, Microsoft reported revenue growth of 21% to USD46.2 billion as sales from its cloud platform Azure jumped 46%. Overall revenue from the ‘Productivity and Business Processes arm’, which includes the company’s Office software, jumped 25% to USD14.7 billion. Microsoft reported a 47% jump in net profits during the past quarter to USD16.5 billion. 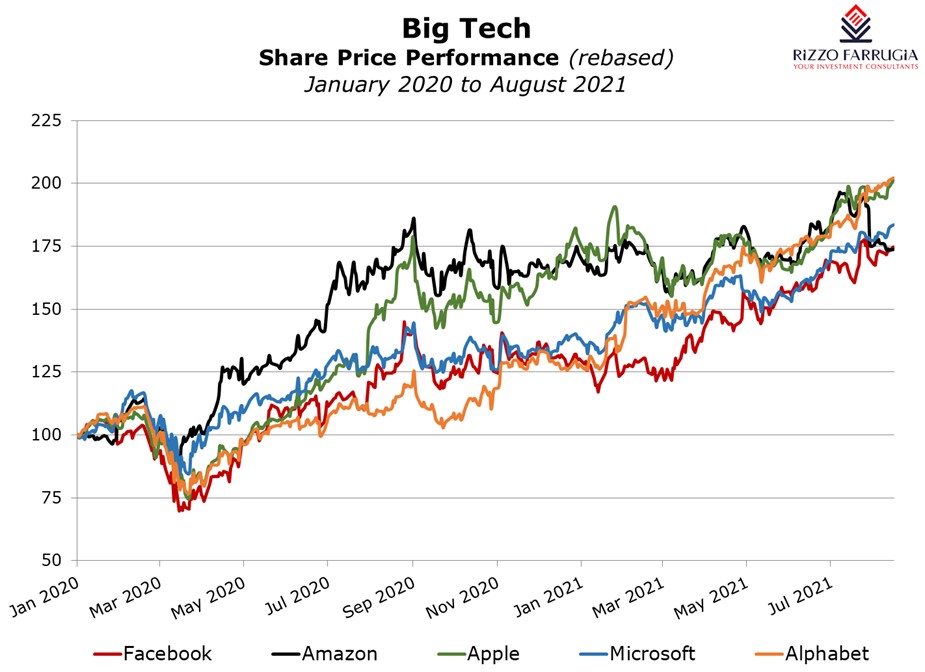 Although the company delivered better than expected quarterly profits and sales on the back of another strong performance from its 'cloud' business, the immediate share price reaction was negative as some commentators highlighted the possibility of a slowdown in the fast-growing segment of the company. Microsoft reported that its net cash position as at the end of the 2020/21 financial year amounted to USD72.2 billion.

Facebook announced that its second quarter revenue rose by 56% to USD29.1 billion reflecting a 56% rise in advertising revenue to USD28.6 billion and operating profit more than doubled to reach USD12.4 billion. However, the company warned that during the third and fourth quarters of 2021, it expects “year-over-year total revenue growth rates to decelerate significantly” due to the strong growth rates experienced in the comparative period last year. It also reiterated further headwinds are expected relating to Apple software updates, which will affect targeted adverts. As of the end of June, Facebook had USD64.1 billion in net cash compared to USD62.0 billion at the start of the year.

Collectively, the combined revenues of the 5 Big Tech companies amounted to USD332 billion during the past three months (representing a growth rate of more than 30%) with profits rising by almost 90% to USD75 billion. The annualised revenue of circa USD1.3 trillion would place these 5 companies at a level nearly the size of the Spanish economy – the fourth largest economy in the eurozone.

The combined market value of the Big Tech companies now exceeds USD9 trillion and despite the extraordinary results of the past quarter, there are an increasing number of international financial journalists and analysts questioning whether the growth rates reported in recent reporting periods can be sustained in the near term. Apple, for instance, highlighted the chip shortages among one of the factors that will be leading to weakening growth rates. Another obvious factor that all 5 companies would need to deal with is the tough comparative figures that the market would be using as a basis to measure the performance of these companies. Effectively, all these companies will face the difficulty of ‘the law of large numbers’. To put this into perspective, when sales of a young company are say USD100,000 per annum, a 40% growth in sales may be easy to achieve. However, when annual revenue reaches USD400 billion as is the case with Amazon, generating additional revenue of USD160 billion is pretty difficult to achieve.

In view of the strong share price performance of the Big Tech companies over the past 18 months, there may be increased volatility in the aftermath of earnings announcements as was seen by Amazon with a 7.6% decline on the day following the publication of results.

Share prices remain impossible to predict in the short term. However, businesses producing goods and services bought by millions are likely to continue to reward long-term investors for the risk taken when investing. As advocated many times in the past, investors need to invest with a long-term horizon and do their best not to panic when prices fall as was evident at the start of the COVID-19 pandemic in early 2020. Essentially, long-term investing is the most effective path for investors to build significant wealth.