In mid-February, I had written an article explaining the sharp decline in sovereign bond prices (including Malta Government Stocks) as the world’s major central banks were preparing to start tightening monetary policy following the spike in inflation.

In that article, I had mentioned that the yield on the 10-year benchmark German Bund rose to +0.30% on 11 February (the highest level since early December 2018) representing a strong recovery from the level of minus 0.4% only two months earlier while the Italian 10-year bond yield had jumped to just under 2% (the highest since May 2020) compared to the all-time low of 0.43% recorded in February 2021.

I had commented that the movement in eurozone yields was naturally also reflected in Malta with the result that all MGS’s maturing from 2031 onwards had all dropped in excess of 6 percentage points since the start of the year. In fact, the yield on the 10-year MGS had risen to 1.36% compared to a level of 0.80% at the start of the year.

Since then, the bond sell-off intensified as Russia’s invasion of Ukraine on 24 February led to a surge in commodity and food prices sending inflation rates significantly higher across the world as both Russia and Ukraine are major producers of agricultural products and raw materials. Consumer prices in the US increased by 8.5% in March 2022 compared to last year – the fastest annual rise since 1981. Similarly, the inflation rate across the eurozone reached a record of 7.4% in March 2022.

The Federal Reserve commenced its monetary policy tightening measures on 16 March with a 25-basis point increase in interest rates (its first interest rate hike since late 2018). Meanwhile, the European Central Bank (ECB) left interest rates unchanged on 14 April but confirmed its intention to end its net asset purchases in the third quarter of this year, which will pave way for the possibility of an interest rate increase by the end of the year. The ECB’s deposit rate currently still stands at minus 0.5% with many commentators arguing that the deposit rate should climb up to zero immediately especially since inflation across the eurozone was already more than double the ECB’s 2% target even before Russia invaded Ukraine.

As a result of the spike in inflation and indications of further tightening by the Federal Reserve as well as the ECB, yields continued to move higher over recent weeks. The 10-year German Bund yield exceeded the 0.97% level earlier this week compared to 0.3% only two months ago while the Italian 10-year bond yield jumped to over 2.65%. The 10-year US Treasury bond yield also rose sharply to 2.94% on 19 April from 1.63% at the start of the year and 2.34% on 31 March. This is clearly reflected in the performance of some commonly-used international bond benchmarks. For example, the Bloomberg Barclays Corporate Bond EUR Index registered a decline of 6.86% since the start of the year while the Markit iBoxx USD Liquid High Yield Capped Index shed 6.96%.

In Malta, the performance of the sovereign bond market is measured through the RF MGS Index which moved below the 1,000-point level last week for the first time since November 2012. Since the start of the year, the RF MGS Index has now dropped by 7.3% while over the past twelve months the benchmark index shed over 10.5%

While the unprecedented environment witnessed in recent years of artificially low yields was bound to reverse itself at some point, the situation changed remarkably in a very short period of time. This has also been due to the sudden twist in interest rate expectations as also witnessed by the abrupt abandoning by the Federal Reserve and the ECB of the “temporary” phenomenon repeatedly attributed to the recent spike in inflation. 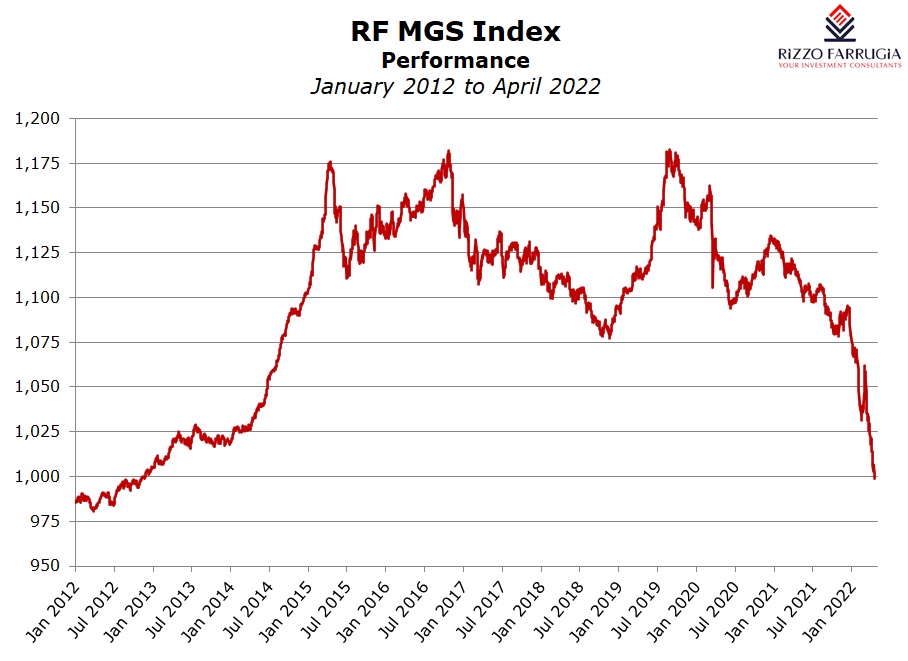 In December 2021, the Federal Reserve had projected that it will hike rates by 75 basis points during the course of 2022 while it now expects hikes of 250 basis points. Last week, one of the Federal Reserve committee members admitted that a rate hike of as much as 75 basis points to be considered during one of the upcoming monetary policy meetings has also been discussed within the committee. Meanwhile, during an event organised by the International Monetary Fund also last week, the Chairman of the Federal Reserve Jerome Powell indicated that a further increase in interest rates of 50 basis points could be ‘on the table’ during next week’s policy meeting as he stated that “it is appropriate… to be moving a little more quickly”.

The situation across the eurozone is more fluid. Prior to Russia’s invasion of Ukraine on 24 February, the eurozone was expecting a year of strong economic growth with the ECB projecting in December 2021 that the eurozone economy would grow by 4.2% during 2022. However, the war has significantly dented the region’s growth prospects leading to mixed signals by top officials of the ECB. In fact, it is unlikely that there will be any major shift in the central bank’s monetary policy before the next meeting on 9 June, when the ECB will issue its new growth and inflation projections. While many ECB officials have been reportedly advocating a quicker end to their bond purchase scheme and an initial interest rate hike during the summer months, the inflation outlook remains very uncertain despite recent record-high readings. Most of the inflation in the eurozone is due to surging commodity and food prices mainly brought about by Russia’s invasion of Ukraine. If one were to exclude energy and food, the inflation rate across the eurozone would be 3%.

These major developments across financial markets are naturally also leading to important movements in the value of the US Dollar against the euro. With a clear path to monetary policy tightening by the Federal Reserve and with the ECB so far continuing to expand its balance sheet while keeping its deposit rate at -0.5%, the euro depreciated significantly against the US Dollar. The euro has declined by nearly 6% against the USD Dollar since the start of the year and is now at its the lowest level since March 2020 of around USD1.07. The EUR vs USD rate has not dropped below the USD1.07 level since April 2017.

The interest rate trade will undoubtedly continue to dominate movements across all asset classes in the near term. Although the recent focus has been on the spike in inflation and the tightening measures by the Federal Reserve, some economists are already opining that inflation may have already peaked in the US although it will remain much higher than the 2% target of the Federal Reserve. This would be welcome news for the investing public who are currently longing for a more stable economic environment after more than two years of continuous upheaval.