It was on 8 January 1992 when the first trading session of the Malta Stock Exchange took place. It is difficult to document all the wide-ranging changes that took place over the years in my short article of today. Instead, I will highlight what I believe to be some of the major milestones, provide some statistics on the performances over the years, before concluding with a few thoughts on the current status of the local capital market.

In the first few years, the Malta Stock Exchange was only open on a weekly basis (on a Wednesday) for 3 hours between 9.30 am and 12.30 pm. Then, as from May 1998 ahead of the listing of Maltacom plc (now GO plc), trading moved to a daily basis also from 9.30 am and 12.30 am. This continued until April 2017 when the current 6-hour daily trading session came into force.

When trading commenced in 1992, the traders representing each of the member firms needed to be physically present on the floor of the MSE to conduct any trades. This is now a distant memory and electronic trading using the Xetra platform is how member firms today conduct trading activity on a daily basis.

The benchmark index capturing the performance of the entire equity market only started being computed in 1996 and therefore one cannot extract data since the commencement of trading in 1992. Nonetheless, a 26-year time series provides sufficient data across multiple economic cycles to derive important information across different asset classes. The MSE Equity Total Return Index produced a compound annual growth rate (CAGR) of 8.4%. This is not materially inferior to the returns seen across the more developed international markets despite the significant underperformance of Maltese equities in the past 4 to 5 years. The S&P500 index in the US for example registered a CAGR of just over 10% over the past 26 years when including dividend payments.

Given the high weighting of the large companies in the equity index, the performance of the MSE Equity Total Return Index is very much dependent on the movements of the handful of large companies on the MSE. As such, this overshadows the positive momentum across other smaller companies. Unfortunately, the sharp declines in the share prices of Bank of Valletta plc and HSBC Bank Malta plc, which were among the most popular shares across the Maltese investing public for several years, dented the recent performance of the index as well as overall investor sentiment. The market capitalisation of BOV shrunk from over €1 billion in 2006 and more recently in 2017 to a current value of just over €500 million. The market capitalisation of HSBC Malta declined in a more spectacular fashion as this dropped to a current value of €330 million from over the €2 billion level in April 2006.

The weak performance of these two banking heavyweights overshadowed some of the more recent success stories for the Maltese investing public. Prior to the COVID-19 pandemic, the share price trajectory of Malta International Airport plc was a very positive one showing the typical benefits of investing in fundamentally sound companies with clear growth opportunities. One of the more successful case studies of the more recent IPO’s was that of PG plc as the share price surged by 140% (translating into a CAGR of 20.5%) and the company’s profitability continued to reach record levels over the past two years enabling the company to continue distributing dividends semi-annually despite the pandemic.

Another company that delivered one of the strongest capital gains across the Malta Stock Exchange has been RS2 Software plc. Since its IPO in 2008, the CAGR works out at 19.4% as the market capitalisation of the company surged to €350 million from its debut at €30 million. 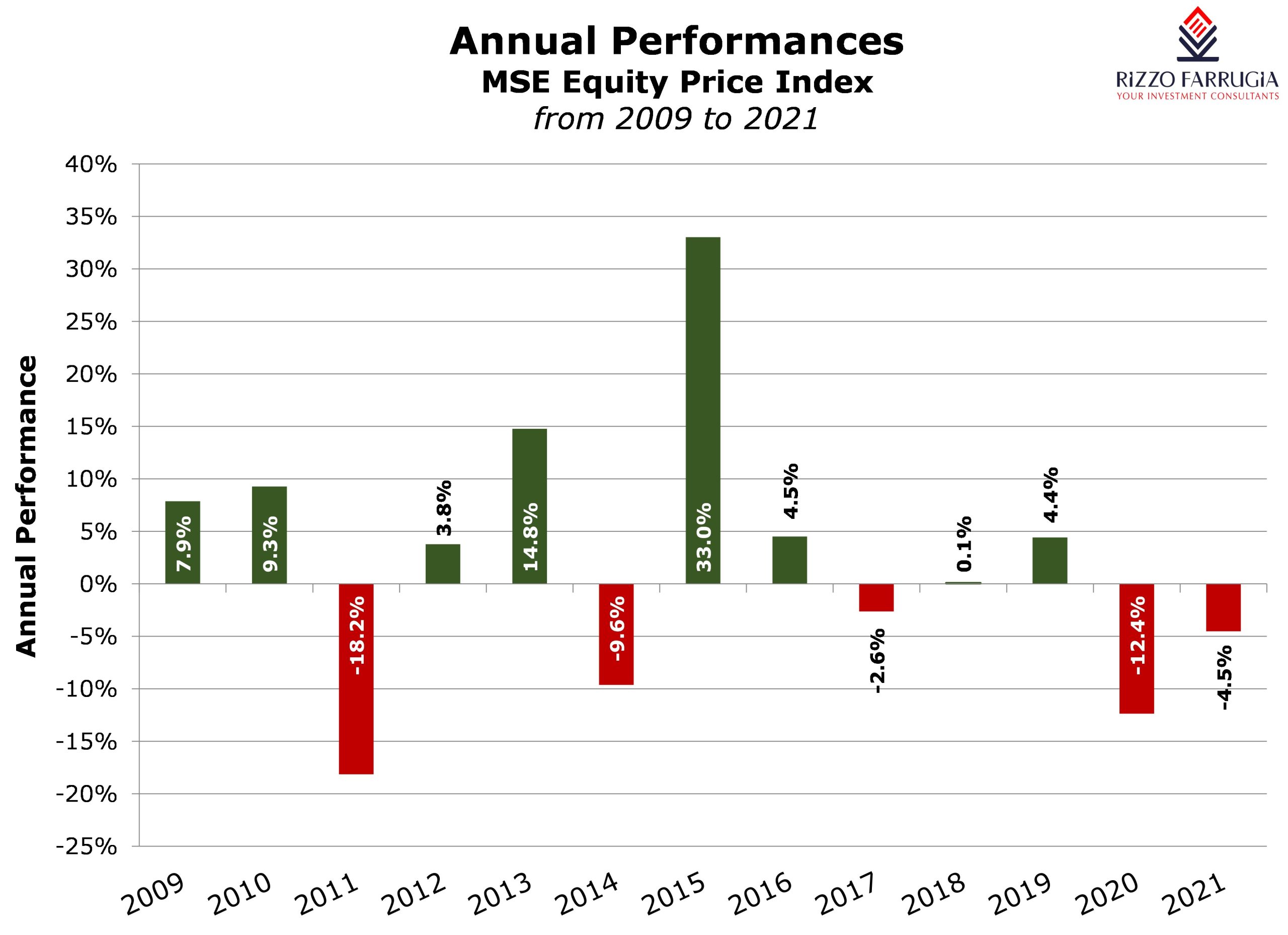 This impressive performance was mainly boosted by the landmark agreement that RS2 had concluded with Barclays Bank plc which had acquired the company’s software licence and shortly afterwards also became its second largest shareholder. RS2 is currently pursuing a very ambitious internationalisation strategy on the back of the 10-year processing agreement with one of the largest banks in the US.

These positive experiences may be a distant memory for some investors following the subdued performances in recent years amid a significant slowdown in trading activity. The weak trading activity is one the most concerning factors among the Maltese investor community and coincides with the decision by the Financial Action Task Force to place Malta on its greylist in June 2021. Although a number of high-ranking officials claim that Malta’s greylisting has not impacted the real economy, the lacklustre activity across the equity market is a prime indicator of the concerns being raised by local investors. Failure by the authorities to recognise this and to discuss ways of helping to improve the liquidity of the market could be very harmful not just for the equity market but also for the entire economy as it would discourage additional companies from seeking public listing and/or raising fresh capital to pursue new investments or projects.

Another important factor that needs to be reconsidered is the rigidity of the requirement for a company to have a 25% free float upon listing. I mentioned this topic several times over the years and it is becoming more evident nowadays given the increased issuance across the equity market at a time of lukewarm appetite by the public. Moreover, the larger size of the companies seeking to list either to finance their growth ambitions or to pursue succession planning issues, which are two of the most common factors for a company to adopt a public listing, places this item firmly on the agenda.

Incidentally, only last month it was reported across the international media that the UK’s Financial Conduct Authority finalised a major overhaul of the listing rules with the aim of attracting more companies to the London Stock Exchange especially from the technology and biotech sectors. One of the reforms includes a change in the minimum requirement of an offering to 10% of a company’s shares from the previous threshold of a 25% stake.

The 30th anniversary is an important milestone for the Borza. It provides all stakeholders with the opportunity to reflect on the major changes that took place over the years to bring the market to what it is today in terms of an equity market with a market cap of €4.56 billion and a growing corporate bond market with total issuance surpassing the €2 billion level as it finally became a more important channel of intermediation between retail and institutional investors and the corporate environment. However, the 30th anniversary coincides with what I believe to be a crucial time when some important decisions need to be taken in order to reignite investor enthusiasm towards equity participation that has become an increasingly concerning issue.