While BOV reported a pre-tax profit of €174.7 million for the 15-month period ended 31 December 2017, the best comparison between the last two financial years was provided by the bank’s CFO Ms Elvia George during a presentation to analysts on Friday afternoon. The graph she presented depicts the pre-tax profits generated by the BOV Group during the past five financial years highlighting the normalized pre-tax profit of €118 million in September 2016 which excludes the €27 million earned from the sale of shares in VISA Europe. Furthermore, the graph indicates that during the final three months of the last financial year (i.e. between October and December 2017), the BOV Group generated a pre-tax profit of €31 million. As such, the normalized profit for the 12-months between 1 October 2016 and 30 September 2017 amounts to €144 million and represents an increase of 22% over the comparable figure of the previous year.

The two main items that led to this superior performance were the overall amount of impairment reversals of €6.2 million compared to provisions of €23.1 million the previous year as well as the strong improvement in the share of profits from the insurance associate companies (Mapfre MSV Life plc and Mapfre Middlesea plc) amounting to €19.3 million compared to €3.7 million achieved in the previous financial year. It is important to highlight that this was not only due to the better performance of these two companies but also due to the change in the Bank’s accounting year. As a result of this change, the figure reported for the financial year under review of €19.3 million represents the share of profits for an 18-month period.

The financial statements continued to show the adverse impact of the negative interest rate environment on the bank’s performance. Although net interest income increased by 22.9% to €182.9 million largely reflecting the additional 3 months in the financial year under review, net interest income contracted by 1.7% on an annualised basis. In comments to the press last Friday, BOV’s Chairman Mr Taddeo Scerri was reported to have stated that “the negative interest rate is costing us €12 million a year”. This comment clearly indicates that once the European Central Bank lifts the deposit rate from the current -0.4% towards zero, the bank stands to benefit in a meaningful manner. Although the BOV Chairman also stated that he does not believe there will be much variation in interest rates in the short to medium term, many international financial analysts are anticipating a gradual rise in the ECB’s deposit rate in 2019 once the quantitative easing programme comes to an end later this year. An increase in the deposit rate would be very beneficial to banks especially those with high levels of liquidity. BOV reported that it held €3.6 billion in cash and short-term funds as at 31 December 2017.

This was the first set of financial statements since the successful €150 million rights issue in December 2017 and the main focus for investors should be the level of Tier 1 capital following the significant capital injection and the bank’s dividend policy. In fact, BOV’s Tier 1 ratio improved to 16.1% as at 31 December 2017 following the rights issue compared to 12.8% in September 2016. BOV’s total level of shareholders’ funds amounted to €962 million as at 31 December 2017 and it will be the first company listed on the Malta Stock Exchange to surpass the €1 billion level in shareholders’ funds shortly.

The Tier 1 ratio of 16.1% is now above the average of European banks but since BOV is a systemically important bank it requires to hold a high level of capital. This ratio is very much the main determinant of the bank’s dividend policy going forward. 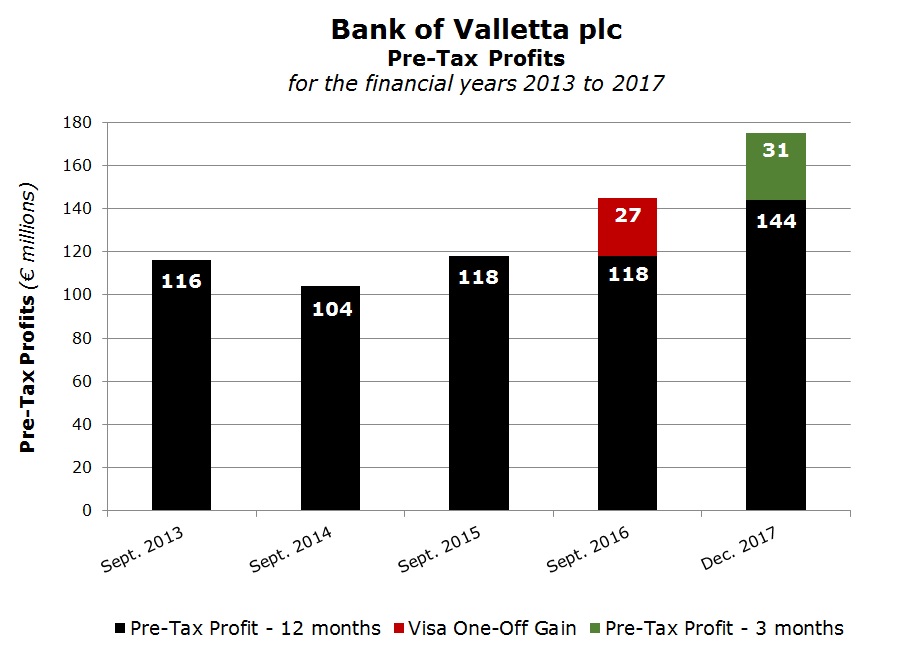 In fact, the new dividend policy which BOV refers to in its press release is conditional on the growth of the Tier 1 ratio over a number of years. It is therefore very hard to establish the dividend payout ratio from one year to the next. While BOV have stressed on the importance of giving a good return to investors, achieving a strong capital ratio is their main aim and a gradual growth in capital will arise from the retention of profits. BOV’s CEO Mr Mario Mallia confirmed that the Tier 1 ratio should approach and settle in the high teens over the next few years. As such, the dividend payout is calculated as the resultant balance in excess earnings once the targeted Tier 1 is achieved each year. Despite the relatively low dividend payout ratio of less than 30% during the last financial year, the annualized net dividend yield is 3.2% based on a current share price of €1.86.

In order to accelerate capital retention, BOV announced a scrip dividend issue last Friday. Essentially, shareholders will have the right to receive the final net dividend of €0.052 per share either in cash or in new shares at an attribution price that will be determined on 12 April 2018. The attribution price will be based on the average of the trade weighted average prices for the trading sessions that will be held on 9, 10 and 11 April 2018 (the first three days when the equity starts trading ex-dividend) and this will be discounted by 5%.

Another important revelation during last Friday’s meeting was that the impact of the new financial reporting standard (IFRS 9) dealing with the provisioning policy is only €8 million and will be reflected in reserves. All the details of IFRS 9 will be published in the 2017 Annual Report which will be available to shareholders ahead of the Annual General Meeting due to be held on 10 May 2018. This is much less than initially feared since at the time of the publication of the interim financial statements to 31 March 2017, BOV had mentioned that “the adoption of IFRS 9 may have a material impact on the Bank’s financial statements”.

Moreover, another very important highlight was that BOV plans to refinance part of the subordinated bonds that are up for redemption in the coming years through the issuance of new bonds. The bonds nearing redemption are the €55.4 million 4.8% bonds due on 27 August 2018, the €40 million 4.25% bonds due on 17 May 2019, the €50 million 5.35% bonds due on 15 June 2019 and the €70 million 4.8% bonds due on 15 March 2020. Since the new bonds forming Tier 2 capital will be subordinated and subject to the BRRD regime, they will be classified as complex financial instruments. Apart from these BOV bonds coming up for redemption, HSBC Bank Malta plc also have a €30 million subordinated bond due in October 2018. Under the MiFID II regulations, the distribution of complex financial instruments to retail investors poses additional challenges since such investors are prohibited from applying for these bonds unless they are able to demonstrate a level of knowledge and experience in the technicalities of ‘subordination’ and ‘BRRD’.

Meanwhile, BOV’s unexpected announcement earlier this week regarding the Italian court case is likely to dominate investor sentiment in the near term.