Earlier on this year, precisely on 8 June, I had written an article about the various rights issues that were expected to take place by the end of 2017 after three companies (Bank of Valletta plc, FIMBank plc and GlobalCapital plc) had indicated their intentions to carry out capital raising plans via an issue of new shares to existing shareholders.

BOV is first off the mark after it issued an announcement on 23 October to inform the market that its Board of Directors authorised the submission of an application to the Listing Authority requesting the approval of a prospectus in relation to a rights issue of approximately €150 million. The announcement also indicated that the share register in respect of the imminent rights issue will close the following day, 24 October.

Prior to the opening of the trading session on Wednesday 25 October as the equity was due to start trading without the entitlement to the rights issue, BOV issued a further announcement disclosing the details of the rights issue. The bank confirmed that eligible shareholders will be offered 1 new ordinary share for every 4 ordinary shares held at a price of €1.43 per share, representing a discount of 30.2% from the closing price of €2.05 the previous day.

Although BOV had been indicating for various months that it requires a sizeable capital injection, it is also worth highlighting that precisely one year ago during the meeting with financial analysts discussing the September 2016 full-year financial statements, the previous Chairman Mr John Cassar White had stated that as a result of the strong rise in the bank’s capital ratio to 12.8% (as at 30 September 2016), BOV was not in any immediate need for an equity injection and this may be postponed further despite the more stringent regulatory requirements in the years ahead. The improvement in the capital ratio was boosted by the sale of the investment in VISA Europe as well as the initial impact of the bank’s new de-risking strategy.

However, during the Annual General Meeting that took place on 16 December 2016, in his last message to shareholders, the outgoing Chairman had warned once again that the bank needed a capital injection of between €150 and €200 million over the next three years.

This change in mind may be due to the credit rating report issued by Fitch Ratings towards the end of November 2016, i.e. between the meeting held with financial analysts in early November and the AGM in mid-December. As I reported in my article two weeks ago regarding credit rating agencies, in November 2016 Fitch had downgraded BOV to ‘BBB’ with a stable outlook. The ratings agency stated that “the downgrade of BOV reflects our view that its capitalisation is under pressure from increasing regulatory requirements and that its current capital ratios are not fully reflecting operational and market risks”. The rating agency had also acknowledged that BOV was considering strengthening its capital through a new share offer, but opined that this fund raising “would not be sufficient to meet all future requirements and for the bank to maintain its viability rating”.

A further confirmation of the more urgent need for a capital injection came on 27 April 2017 when the bank issued its interim financial statements as at 31 March 2017. BOV stated that it is planning to issue €150 million in new share capital over an approximate one-year period as it is anticipating a situation where the retention of profit will not suffice and must be supplemented by fresh issues of capital in view of the more stringent capital requirements, the required investment in the core IT system as well as other important initiatives.

BOV convened an Extraordinary General Meeting on 27 July 2017 to carry out a number of changes to the memorandum and articles of association including an increase in the authorised share capital to make space for the rights issue and for shareholders to authorise the directors to issue shares over a 5-year period. During the meeting Chairman Mr Taddeo Scerri confirmed that the rights issue was expected to take place between October and November but he also stated that no decision was taken as yet on whether the capital injection will take place in two traches or in one tranche immediately. BOV’s Chairman also confirmed during the EGM that the Government of Malta (the bank’s largest shareholder with a stake of 25.23%) had already declared that it will be subscribing to its rights entitlement.

The second largest shareholder, the Italian bank Unicredit with a stake of 14.55%, confirmed via the Prospectus published last week that it will not be taking up its rights entitlement. Unicredit currently holds around 61 million shares and therefore there are an additional 15.3 million shares approximately available for subscription. 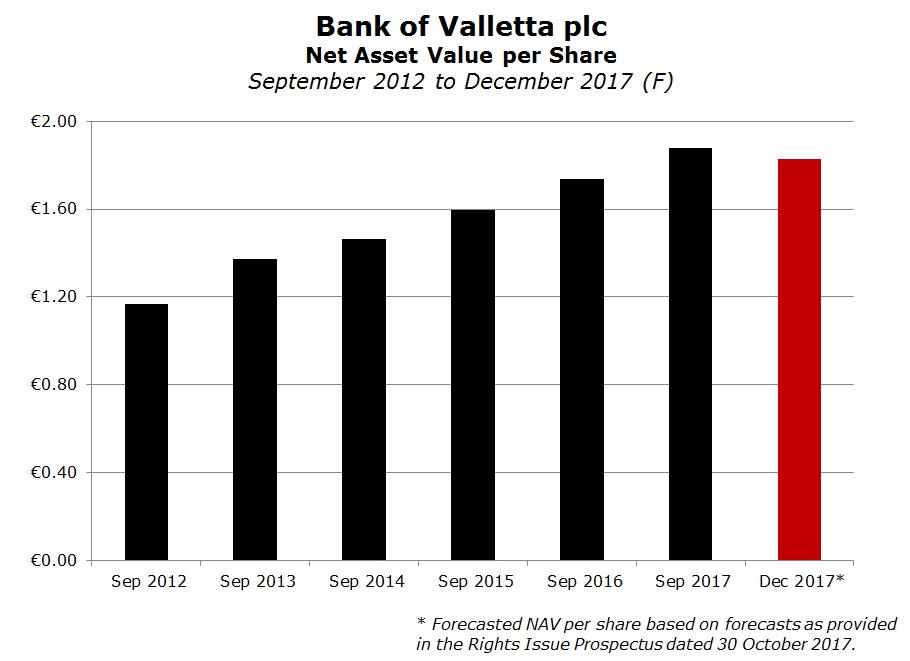 As the shares began trading ex-rights on 25 October, the share price dropped by 7.3% to €1.90 but quickly regained the €2.00 level shortly thereafter before sliding to below €1.80 earlier this week. A decline in the share price is understandable given the creation of new shares at a discounted price. An important calculation that is generally undertaken once a company discloses the terms of a rights issue is the theoretical ex-rights price (TERP).

The TERP is the share price that an equity should have following a rights issue. This is widely used by all financial analysts globally since it determines the correct value of the shares once the equity turns ex-rights. The most common way of calculating the TERP is to add the value of the rights issue to the market capitalisation of the company prior to the rights issue. This is then divided by the total number of new shares in issue after the capital raising exercise is complete.

In the case of BOV, on 24 October (being the last day that the shares traded with the entitlement to the rights issue), the market capitalisation amounted to €861 million (420 million shares at a share price of €2.05). The rights issue is of a total of approximately €150 million (105 million new shares at €1.43 per share) and therefore the TERP is calculated by dividing the new market capitalisation of €1,011 million with the total new shares in issue of 525 million. The TERP equates to €1.926 and implies that an investor should be indifferent between buying shares at €2.05 prior to the rights issue (and assuming that the rights will be taken up at €1.43) and buying shares without the rights entitlement at €1.926.

Assuming the price of €2.05 was indeed a correct or fair price, BOV’s equity should eventually settle around the €1.926 level, all other things being equal.

The rights issue period started yesterday and runs until 6 December allowing investors sufficient time to contemplate the offer and process the applications accordingly.

As stated before, BOV’s rights issue was required in view of more stringent regulatory requirements in the years ahead as well as in anticipation of the implementation of a new financial reporting standard (IFRS 9) which will significantly change the way in which banks account for impairment losses. This new standard is being implemented as from January 2018 and BOV had warned in April 2017 and more recently at the time of the publication of the September 2017 financial statements as well as in the Prospectus published last week, that “the adoption of IFRS 9 may have a material impact on the Group’s financial statements”. Unfortunately, however, although the Bank acknowledged that it “has already carried out an initial assessment on the impact of the new standard”, no further details were provided in the Prospectus including the possible anticipated amount of the impact.

As such, the implementation of IFRS 9 in January 2018 will result in a downward adjustment to the bank’s net asset value per share. BOV changed its accounting year-end from 30 September to 31 December and therefore this adjustment will become evident in the 2018 interim financial statements being published by the end of August 2018.

Assuming the rights issue is indeed successful, shareholders will look forward to any feedback from the credit rating agency Fitch Ratings following its statement in November 2016 that BOV’s capital injection would not be sufficient to meet all future requirements and for the bank to maintain its viability rating. Rating decisions and statements by international credit rating agencies are very important considerations for all investors.