Malta International Airport plc generally issues its annual traffic statistics as well as its traffic and financial forecasts on the same day. However, this year, the airport operator first published its 2019 annual traffic statistics via a company announcement issued on 8 January and last week it convened a press conference detailing the traffic and financial forecasts for 2020.

Although the 2019 traffic results were issued on 8 January, additional details were provided by MIA’s CEO Mr Alan Borg during last week’s press conference. Passenger movements grew every month compared to the previous year with two months registering double-digit growth – April with an increase of 10.5% and December with a growth of 15.2%. The high growth registered in April was due to the effect of Easter which occurred in March the previous year and therefore March 2019 was the weakest month at +1.3% over March 2018. Another important observation from the 2019 passenger movements was that in August 2019 over 800,000 movements were recorded in a single month for the first time in MIA’s history.

The top three markets remained the UK with a market share of 23.4%, followed by Italy at 19.8% and Germany at 12.3%. It is interesting to highlight that the market share of both the UK and Italy declined from the 2018 figures as both markets registered weaker growth in 2019 compared to other markets. In fact, while the UK market grew by only 2.2% and Italy by 3.4%, there was a 9% growth by Germany and more robust growth rates for France (+10.8%) and Spain (+17.3%).

As a result of a number of new routes and added frequencies by existing airlines (more importantly the main carriers Ryanair and AirMalta), MIA is anticipating achieving 7.5 million passenger movements in 2020 representing a forecasted growth rate of between 2% and 3% over the 2019 record figures.

While some shareholders may be disappointed at the low growth being anticipated following the much higher growth rates in previous years (+7.4% in 2019 and +13.2% in 2018), this must be seen in the context of the substantial increase in passenger movements already recorded over recent years. As such, after such extraordinary rates of growth, a period of lower growth rates would be understandable in the circumstances. In fact, as indicated earlier, passenger movements were below the 3 million level in 2009 and below the 5 million level in 2015 and if MIA achieve the 7.5 million projected level in 2020, it would represent an increase of 62.4% over the 2015 figures and 157% over the 2009 figures.

MIA’s CEO indicated that the forecast also takes into account the general risks of the aviation industry such as geopolitical tensions, fluctuations in the price of oil as well as the implications from trade wars and the final outcome of Brexit. Moreover, Mr Borg also argued that the forecast for 2020 also factors in the challenges to aircraft availability due to the grounding of Boeing’s B737 Max airliner and delays in deliveries being experienced by its major competitor Airbus. In fact, MIA’s largest carrier, Ryanair, downsized its forecasts as a result of the delay in delivery and re-certification of the B737 Max which led to the closure of two Ryanair bases impacting air traffic to Malta. Following the more recent revelation on the spreading of the coronavirus, one should also not underestimate the potential disruption to travel also across Europe including Malta.

Based on the traffic projections being envisaged for 2020, MIA announced that it is expecting to generate revenues of over €102 million during the current financial year ending 31 December 2020, leading to an EBITDA of over €64 million and a net profit of over €35 million. 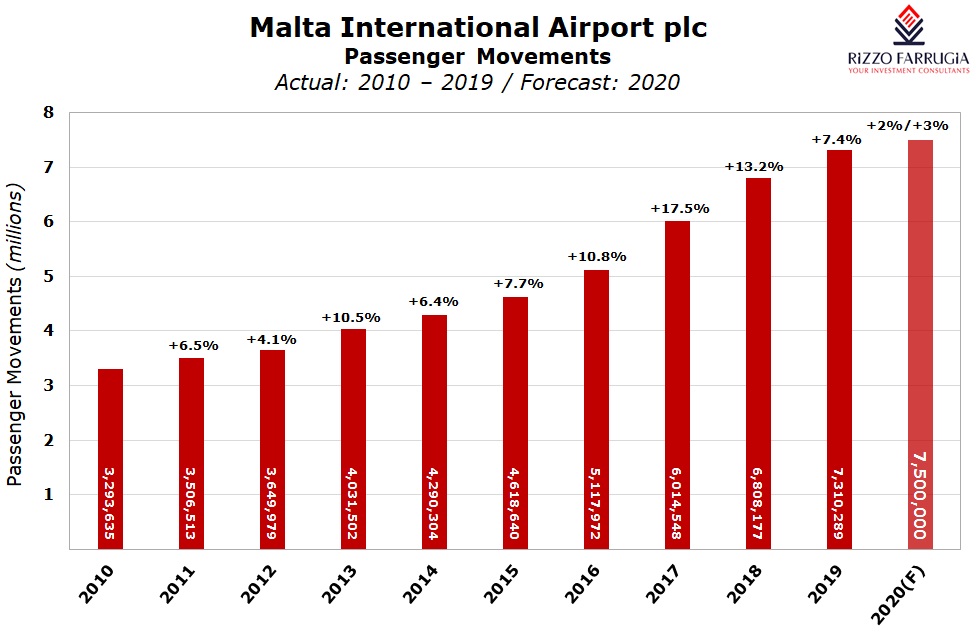 Meanwhile, since MIA is a subsidiary of Vienna International Airport, it is interesting to note that some foreign analysts reviewing Vienna Airport also disclose their own passenger and financial forecasts for MIA separately. In mid-November 2019, a foreign analyst had indicated that they expect MIA’s 2020 passenger traffic to grow by 6% leading to overall revenue of €108 million.

The main highlight of last week’s press conference was the significant investment being envisaged to expand the airport terminal. MIA is aiming to invest circa €100 million in its terminal expansion project comprising a significant increase in the size of the terminal to around 31,200 sqm compared to the current footprint of circa 18,000 sqm leading to an additional 25 check-in desks, 4 new security lanes, 15 additional gates as well as a substantial enlargement of the security screening, baggage reclaim and commercial areas. Although the company released detailed visuals, the anticipated completion date of the entire project was not disclosed as yet, as a timeline for the completion of the project is expected to be rolled out by the end of this year. The project will definitely be carried out in phases and in fact, MIA announced that it will shortly be issuing a call for architects to submit detailed design proposals and phasing plans. From the layouts presented during the press conference, it is envisaged that the first two phases will comprise the lateral extensions to the current terminal taking place before the construction of the new block on the front of the main entrance to the building.

In addition to this major investment in the coming years, MIA is currently working on the €20 million investment in the new multi-storey car park ‘village’ due for completion in 2020 (including an underground link between the new car park and the existing main car park) coupled with plans for other important projects such as the development of Apron X and SkyParks II. The multi-million Apron X project entails the development of 46,000 sqm of land located between Apron 8 and Apron 9 with works anticipated to commence by the end of 2020. Preparatory works for the €40 million development of SkyParks II (including 22,000 sqm of office and commercial space) are ongoing and in fact, a call for proposals for a hospitality partner to run the 4,100 sqm business hotel forming part of the SkyParks campus, was issued earlier last week.

At the upcoming AGM, shareholders are likely ask how these various major investments will be financed and the time period being envisaged to complete this ambitious expansion. MIA has no financial borrowings on its balance sheet and the latest data available as at the end of September 2019 indicates that it held cash balances and fixed-term deposits amounting to a total of €29.6 million. Moreover, it is worth highlighting that the average annual amount of free cash flows generated by MIA in the five-year period between 2014 and 2018 stood at just under €24 million, representing nearly one-third of the average revenue of €76 million. It remains to be seen whether debt financing will be used for any part of the projects given the very low interest rate environment, or whether MIA will opt to finance from available resources and utilise the continued strong cash flow generation. This is important for shareholders in the context of the anticipated dividend policy in the years ahead especially in the light of recent statements by Vienna International Airport of considerably higher dividends for their shareholders as the dividend payout ratio rises to 60%.