Last week, shareholders of Simonds Farsons Cisk plc received the 2017 Annual Report and all other documentation ahead of the Annual General Meeting taking place on 27 June.

Apart from the customary resolutions including the approval of the financial statements as well as the final dividend, during the forthcoming AGM another resolution relates to the spin-off of the company’s shareholding in Trident Estates Limited. This will be carried out through the payment of a dividend in kind by way of a distribution of the company’s shareholding in Trident on a pro-rata basis to its shareholders.

In essence, shareholders are being requested to authorise the board of directors of Farsons to take all measures that may be necessary to implement the spin-off.

This should not come as a surprise to many shareholders since Farsons’ plans in this respect have long been in the making. In fact, the development of the large parcel of land in Mriehel and the spin-off of the non-core properties into a separate publicly traded vehicle had first been mentioned in 2008. Meanwhile, two years ago (in 2015) Chairman Mr Louis Farrugia presented financial analysts with a brief overview of the business park and the mechanics of the property spin-off while the British architect Prof Ian Ritchie delivered a detailed presentation showing the transformation of the site in Mriehel.

An explanatory circular was also distributed to all shareholders last week together with the Annual Report. The lengthy circular provides further detail on the resolution being proposed and gives some important information on the property strategy of Trident and the financial impact that the spin-off will have on the Farsons Group.

The statement of financial position of Farsons as at 31 January 2017 shows an overall amount of €104.8 million in property assets, consisting of €73.6 million classified as ‘property, plant and equipment’ and €31.2 million as ‘investment property held for sale’. In the circular, the Directors of Farsons state that the “development of under-utilised real estate, particularly the Brewery Façade and Trident House, is essential to unlock the full value of these sites and continue to extract maximum value for the shareholders from the extensive property portfolio owned by the Group”.

As such, the Directors are recommending that a portion of the Group’s property portfolio is separated from the core business operations. The investment property valued at €31.2 million represents the value of the various properties forming Trident Estates (previously Trident Developments).

The circular split the various properties into three categories: (i) the properties held for redevelopment namely the Brewery Façade (valued at €9.05 million) and Trident House (valued at €10.2 million); (ii) properties used by the Group’s franchised food operations namely 5 outlets that are leased to the Group for the running of Pizza Hut, Burger King and KFC for an overall value of €9.8 million and (iii) four other properties in Sliema and St Julian’s (valued at €2.1 million) which are rented to third parties.

The circular also provides detailed information on the financial position of Trident Estates. Rental income that will be generated by Trident Estates in the initial years prior to the redevelopment of the other properties is expected to amount to €0.96 million, of which €0.67 million (69%) relate to rent received from companies within the Farsons Group. The dependence on Farsons will diminish in later years once additional revenue is generated from the new development projects – initially the Brewery Façade and later the Trident House. Apart from the €31.2 million in investment property, Trident Estates will also be in receipt of a cash injection of €6.5 million by Farsons to part finance the development costs related to the Brewery Façade. 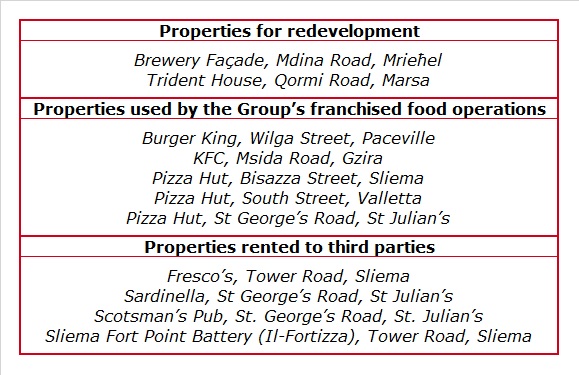 The net asset value of Trident Estates is expected to amount to €35.6 million after deducting liabilities of circa €2.1 million.

Prior to the spin-off taking place, the share capital of Trident Estates will be changed to match the number of shares in issue of Simonds Farsons Cisk plc amounting to 30 million. This is being done so that shareholders of Farsons will receive 1 share in Trident Estates for every 1 share held in Simonds Farsons Cisk plc. This is identical to the spin-off of Malta Properties Company plc from GO plc in October 2015.

As such, it is important for shareholders to take note that the net asset value per share of Trident Estates will equate to €1.19. However, this may change prior to the actual spin-off taking place since the valuation of each property will be re-established or re-confirmed to reflect the fair value closer to the date of listing of Trident Estates on the Malta Stock Exchange.

Meanwhile, the circular also shows the impact on the financial position of the Farsons Group. It is estimated that there will be a reduction of €0.5 million in profits at Group level due to (i) the rental charge paid by Farsons on the properties owned by Trident Estates; (ii) the loss of rental income due from third parties on properties owned by Trident Estates; (iii) the reduction in the Group’s operating costs on account of the ground rent currently incurred on properties owned by Trident Estates as well as operating expenses of Trident Estates. Meanwhile, overall shareholders’ funds will decrease by just over €36 million from €123.3 million to €87.2 million. As such, the net asset value per share will decline from €4.11 to €2.91. A number of financial indicators will therefore change as a result of the spin-off. Due to the reduction in the value of shareholders’ funds, the return on equity will improve from 9.8% to 12.7%. On the other hand, however, the operating profit margin will edge lower to 13.8% from 14.6%.

There is no specific date as yet for the listing of Trident Estates on the MSE. More importantly, prior to the actual listing, the record date for the distribution of shares from Farsons into Trident will be announced. This will determine those shareholders entitled to receive the dividend in kind. This will also naturally lead to a re-adjustment in the share price of Farsons once the shares turn ex-dividend. Market participants will therefore need to await announcements by Farsons in due course.

Moreover, Trident Estates will also be issuing a Prospectus prior to the listing of its shares. This will be an important document since it will provide additional detail on the property strategy of Trident ahead of the rights issue expected in 2019 to partly fund the first development.

Although the shares of Trident Estates will not be offered to the public as part of the spin-off transaction, it is an important development since it will increase the number of companies on the Official List. Hopefully, other companies will follow in the footsteps of PG plc by going public and offering shares to the market at large. Following the incentives granted in the last Budget, other companies should also consider a share offer to the public in the months and years ahead.