Following the successful €150 million rights issue by Bank of Valletta plc late last year, which was the largest corporate action ever undertaken by a company listed on the Malta Stock Exchange, on 23 March FIMBank plc was granted approval for a USD115 million rights issue.

FIMBank shareholders have until 18 April to exercise their entitlement to subscribe for 2 new shares for every 3 shares held at a price of USD0.55 per share. This is indeed another very large rights issue with shareholders being requested to apply for a sizeable proportion of their current shareholding.

In fact, it is worth highlighting the support of the bank’s two principal shareholders – United Gulf Holding Company B.S.C and Burgan Bank S.A.K (both members of the KIPCO group of Kuwait) – who have committed themselves to exercise their right to subscribe to their entitlement of the rights issue. Moreover, United Gulf Holding Company B.S.C. is also undertaking to underwrite up to USD105 million of the overall rights issue. This will not only ensure a successful offering but continues to show the support by Kuwait’s sovereign wealth fund which has been instrumental for FIMBank following the very difficult times in recent years.

FIMBank had a profitable track-record and a history of constant dividend distributions prior to 2013 but it then suffered considerable losses between 2013 and 2015 (with aggregate net losses of USD49.2 million) mainly due to a significant deterioration in the business operations in Russia and India. This was also the result of the bank’s previous strategy that placed too much emphasis on rapid expansion without having sufficiently robust safeguards and risk controls in place. FIMBank had conducted a USD50 million rights issue in mid-2014 at a price of USD0.65 per share in order to strengthen its equity base following the significant losses incurred.

In mid-2015, FIMBank rolled-out a new strategy in conjunction with the appointment of a new CEO as well as other members of top management. The overall aim was to achieve a quick turnaround in the group’s financial performance by retaining focus on global trade finance activities and consolidating the forfaiting, factoring and treasury management parts of the business. FIMBank’s management adopted a more stringent and selective approach towards doing business and also installed much stronger governance and risk control procedures and structures. A significant restructuring exercise of the factoring network took place since some businesses were underperforming or else did not fall within the newly-established risk-reward parameters. In fact, the factoring businesses in Russia and Dubai were closed off.

FIMBank was quick in registering positive results and returned to profitability in the last two financial years with a net profit of USD5.02 million in 2016 and USD7.52 million in 2017.

FIMBank held a meeting with financial analysts on 16 March to discuss the highlights of the 2017 financial performance and also delve into the immediate objectives in the coming years following the successful turnaround strategy since 2015.

Both the Chairman Dr John C Grech and the CEO Mr Murali Subramanian confirmed that the business turnaround has been completed and the focus of the bank is now to grow its activities. The CEO explained that the bank now has a sounder business model and structures have been put in place to ensure that the bank has a solid platform which is scaleable and therefore it can take higher volumes of business without incurring additional costs.

The rights issue is therefore the main highlight of the current financial year which should lead to higher business volumes and greater profitability in the years ahead.

Unfortunately, FIMBank did not publish additional details on its financial objectives for 2018 and future years. This would have helped tremendously in assisting many of the retail investors on whether to participate in the rights issue or otherwise.

The 2017 financial performance was positively impacted by some one-off items such as the revaluation of part of the head office in St. Julian’s which is leased to third parties and the recoveries of some of the old impairments of previous years. In 2017, FIMBank registered an impairment reversal of USD2.3 million against an impairment charge of USD2.3 million in 2016. 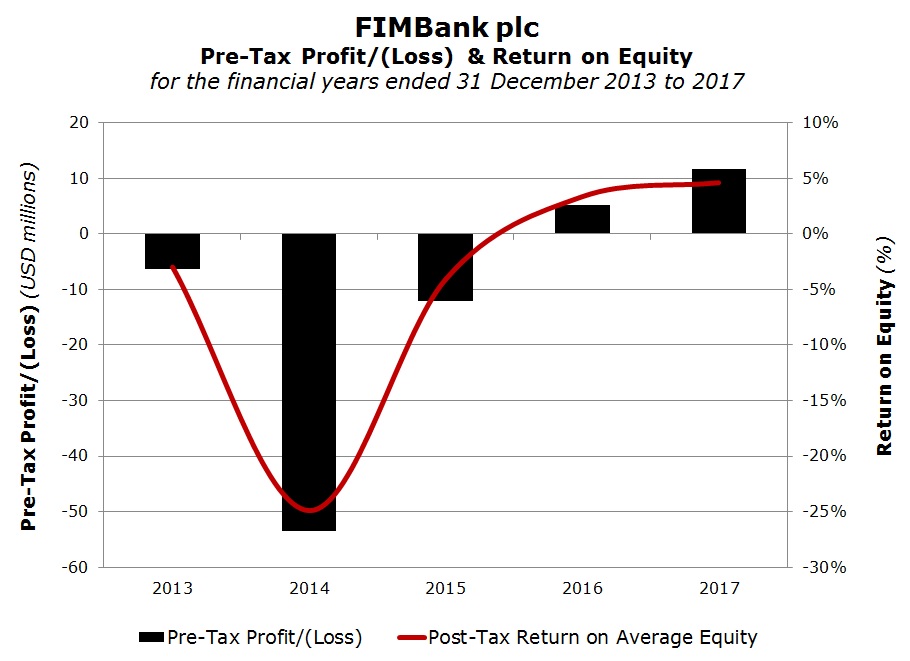 FIMBank’s CEO had explained during the meeting that as a result of the efforts being undertaken, other significant recoveries are expected during 2018 and 2019. While this is positive for shareholders following the disappointing results between 2013 and 2015, FIMBank’s management now needs to prove to shareholders that profitability from core operations can also improve to more meaningful levels when excluding certain non-core and non-recurring items.

An important measure that should be analysed by shareholders in all companies is the return on equity. FIMBank’s ROE during 2017 was of only 4.6%. When questioned on the future expected returns during the meeting on 16 March, FIMBank’s CEO acknowledged that the return on equity is still low and also highlighted that in view of FIMBank’s business profile which entails one of higher risks, more attractive returns should be produced. Mr Subramanian explained that the other banking subsidiaries within the KIPCO group (the ultimate beneficial owners of FIMBank) give an average return on equity of 11% and therefore FIMBank’s objective is to provide superior returns to these within the next 5 years. The CEO highlighted the ultimate target of achieving a return on equity of circa 15%. This would imply a significant increase in profitability from current levels not only due to the fact that the return on equity during 2017 was of 4.6% but more importantly since the equity base will increase sizably as a result of the current rights issue.

Shareholders should also be aware of the recent comments and actions by the international credit rating agency FitchRatings. In January 2015, FitchRatings had downgraded FIMBank’s long-term Issuer Default Rating (IDR) to “BB-“ from “BB”, citing the group’s “high risk appetite” as well as a level of “capitalisation that is only just acceptable”. However, following the USD50 million rights issue in 2014 and the initial signs of the success in the turnaround strategy, FitchRatings upgraded its outlook in January 2016 to “Positive” from “Stable” and in December 2016, it also improved its long-term IDR on FIMBank to “BB”. Meanwhile, in its latest report published in September 2017, although FitchRatings maintained its long-term IDR on FIMBank at “BB” with a “Stable” outlook, it hailed the group’s “niche trade finance focus and expertise” and commented positively on FIMBank’s “long-standing franchise and improving business model” as well as on its “capable management team and clear turnaround strategy”. FitchRatings explained that although recent profitability trends have been “modest”, they “are showing improvement and reflect better cost control and lower loan impairment charges”. Moreover, FitchRatings noted that “risk management and controls are improving”. On the other hand, FitchRatings made reference to FIMBank’s risk appetite which it views as being “above average due to the nature of the bank’s business” and warned that “any material improvement to FIMBank’s currently weak asset quality metrics will take time”. It would be interesting to see the comments from FitchRatings following the current rights issue. Moreover, if FIMBank’s management succeed in improving the financial performance in future years, it will also be interesting to see whether this can help in achieving an ‘investment grade’ rating.

While some companies that are listed on the MSE have relatively stable business prospects which can be easily projected into the future, other companies have different business strategies that aim to grow internationally and their financial performance is not easily predictable from one year to the next. These companies, such as FIMBank plc and various others, need to communicate more effectively with the market via regular company announcements, the issuance of interim directors’ statements and also the publication of financial forecasts similar to the strategy of Malta International Airport plc. This will help investors in gaining a better understanding of a company’s business prospects. In the case of FIMBank, more regular announcements and the publication of forecasted key performance indicators may help improve investor sentiment after a long period of disappointing returns for shareholders.