For the third consecutive year, the Treasury of Malta issued its ‘Annual Borrowing Plan’ which replaces the ‘Indicative Calendar’ published in previous years.

The 2020 Annual Borrowing Plan covers the projected borrowing requirements of the Government of Malta for this year. The plan reveals that the total amount of issuance of Malta Government Stocks (“MGS”) during 2020 is not expected to exceed €450 million.  The funds raised will be principally used to finance the redemption of six MGS issues which, in aggregate, amount to €461.5 million.

Moreover, the Treasury explained in its press release that it will be issuing three different types of securities – the conventional fixed rate MGS; the floating rate MGS linked to the six-month Euribor which is primarily targeted to institutional investors; as well as Malta Government Retail Savings Bonds similar to the savings bonds issued in the past three years.

The Treasury also indicated that it is aiming to spread its issuance programme for 2020 over four to five issues whilst the maturity structure will be a mix of short and medium to long MGS. The details of the MGS on offer and the respective amounts and maturities will be published one to two weeks prior to the launch of the new issues. The first redemption in 2020 is on 25 April amounting to €158.3 million, followed by €116 million between early June and end July, €138.5 million on 26 September and €47.9 million on 29 October.

The €450 million intended to be issued during 2020 is exactly in line with the amount raised through the primary market in 2019. However, although the amounts are the same, it is worth highlighting that the MGS redemptions during 2019 amounted to €435 million. As such, an amount in excess of the redemptions was raised by the Treasury in 2019 notwithstanding the fiscal surplus being recorded by the Government. On the other hand, the maximum amount that may be raised this year is slightly below the €461.5 million due to be redeemed during the course of 2020.

In an article published earlier this month in which I reviewed the performance of the MGS market during 2019, I indicated the strong but very volatile movement in prices in line with the changes across international sovereign bond markets reflecting monetary policy decisions as well as other economic and political factors.

Despite the equity-like returns in some of the individual long-dated MGS which should have enticed those investors wishing to speculate on generating quick capital gains as was often the case between 2012 and 2016, it is also noteworthy that during the course of 2019, only €100 million of the €450 million was raised from retail investors. Moreover, this was not via a customary MGS issuance but through the ‘subsidised’ Malta Government Savings Bond. In fact, the €100 million was issued through a 3.00% 62+ Malta Government Savings Bond maturing in 2024 which compares with a 5-year MGS currently giving a marginally negative yield based on the indicative prices published by the Central Bank of Malta. This could be a clear indication that it would not be easy for the Treasury to raise large amounts from retail investors given the very low yields on the secondary market. As I mentioned in my article earlier this month, yields across the entire spectrum of MGS dropped below the 1% level for the first time ever on 5 August 2019 and have not moved substantially since then. In fact, based on the prices published earlier this week, the longest-dated MGS (the 2.4% MGS 2041) is currently giving a yield to maturity of only 0.9%. Possibly, very few retail investors would be willing to invest in a such a long-term bond offering a return of below 1% per annum before tax.

In view of this, the Treasury continued to target retail investors who would qualify for the 62+ savings bonds rather than conventional fixed rate MGS and instead raised the majority of the overall borrowing requirements from institutional investors who would find such low yields still appealing given the opportunity costs of holding onto idle cash due to the negative interest rate environment. In fact, similar to developments taking place across international sovereign markets, for the first time ever, an offer of new MGS through the primary market during 2019 was made with negative yields to maturity.

With interest rates expected to remain very low for the foreseeable future, the Treasury may have to continue to depend on institutions to roll-over Government debt that is up for redemption in the years ahead. With this in mind, it is also interesting to depict the MGS maturity schedule in the coming years. 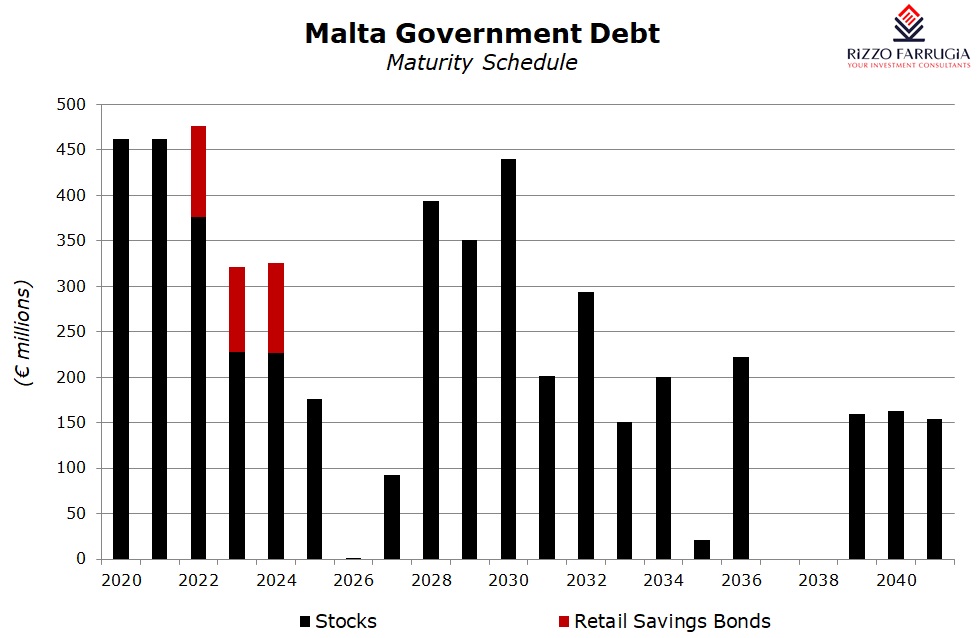 Should local institutions continue to retain such high levels of liquidity, the Treasury should not find it difficult to raise these amounts. In fact, during the course of 2019, there was total demand of just over €1 billion for the €450 million on offer.

In view of the plans by the Treasury to offer retail investors the 62+ Malta Government Savings Bond again in 2020 as a result of the very low interest rate environment, retail investors who do not qualify for these ‘subsidised’ offerings or who do not find these securities sufficiently attractive to supplement their other sources of income in view of the current standard of living, must resort to other investments to improve their income generation from their investment portfolio. While the more affluent may be able to take the extra risk and introduce selective equities into their portfolios, the large majority would not be psychologically prepared to invest a small proportion in the equity market and would focus on the corporate bond market.

When investing in bonds, it is important for investors to gauge the financial soundness of the country (in the case of sovereign bonds) or the company to which one is obtaining exposure to within their portfolio. While the major international credit rating agencies perform regular checks on the country’s financial soundness, most companies listed on the MSE are not assessed by the international credit rating agencies. As such, investors must either perform their own analysis on the credit worthiness on individual companies or resort to investment professionals who also offer such a service.

Malta has an ‘A’ rating by the major international credit rating agencies. Despite the increased country risk following the political developments over recent months, none of the rating agencies has announced a credit rating downgrade. However, on 4 December 2019, few investors may have noticed due to the lack of media coverage, that Moody’s warned that the ‘Caruana Galizia case raises political risk’ and is a negative development when assessing the overall country risk. Meanwhile, on 11 January 2020 it was reported that FitchRatings reaffirmed Malta’s long-term A+ rating with a positive outlook and argued that despite ongoing political turmoil threatening Malta’s good governance standing, high economic growth is likely to continue and the country’s outlook remains positive.

Investors who have inevitably resorted to obtaining a larger exposure to the corporate bond market in view of the miniscule yield offered by the MGS market must understand that they are taking on extra credit risk and therefore must remain very vigilant on the bonds that they invest in. Performing an analysis of a company’s financial statements through the information available in the Prospectus or the Financial Analysis Summary for those bonds on the Regulated Main Market is very important before proceeding with any investment. Other investors who are not sufficiently knowledgeable to conduct such a review must seek professional advice in this respect. Moreover, it is important for investors to carry out ongoing reviews of their investment portfolios in view of changing circumstances of companies during the lifetime of a bond, as these may impact their ability to honour their obligation or seeking refinancing upon maturity.