On Monday 11 October, Malta’s Finance Minister Clyde Caruana delivered the 2022 Budget Speech in Parliament. As in most years, while many journalists and Maltese citizens focused on the budget measures being introduced, not much attention was given to the state of the country’s finances. This is important to review on a periodic basis especially at a time when the devastating economic impact from the pandemic left a huge dent across all economies and government finances worldwide.

As I have advocated in the past, it is of fundamental importance for investors to assess the financial soundness of a company (by reviewing the financial statements) before contemplating an investment in a bond or equity offering. Likewise, the investing public should also review the finances of the Government of Malta to gauge its overall credit worthiness since this has a bearing on a multitude of factors amongst which the credit rating given by the international rating agencies.

In addition to the Budget Speech, the Finance Minister also published the Financial Estimates and Economic Survey which provides detailed information on the Government’s finances including revised estimates for 2021 as well as estimates for the next three years.

The Government is expecting a deficit of €1.55 billion in 2021 (equivalent to 11% of GDP) compared to the original estimate at the time of last year’s budget of a deficit of €757 million (or 5.9%) of gross domestic product (GDP). The revised expectation for the 2021 deficit of €1.55 billion is also above the deficit incurred in 2020 which amounted to €1.27 billion. While the effects of the pandemic are undoubtedly one of the main reasons for such a wide discrepancy between the original expectations for 2021 and the revised estimates for this year, it would be fruitful for Maltese citizens to obtain a clearer understanding of the reasons for such a material variance as one expects from companies who issue financial instruments to the public when such discrepancies take place.

As a result of this year’s deficit of €1.55 billion, the overall public debt is being estimated to rise to €8.56 billion by the end of 2021, which is equivalent to 61.3% of GDP. This is a very important metric used by international credit rating agencies when assessing the risk profile of any country.

The total MGS issuance in 2020 amounted to €1.4 billion including the issuance of a further €95 million in the 62+ Government Savings Bonds. At the time of the 2021 Budget Speech in October 2020, the total amount of new borrowing anticipated for 2021 amounted to just under €980 million. However, in view of the much higher-than-expected deficit (€1.55 billion versus the earlier estimate of €757 million), the actual borrowings already raised this year coupled with the additional amounts required by the end of the year will amount to a record of €1.8 billion (of which €462 million were redemptions of MGS that matured in 2021).

The requirement for the Government to continue to issue new MGS’s annually will continue in the coming years since more than half of the total MGS in issue of almost €7 billion are due for maturity by 2029. 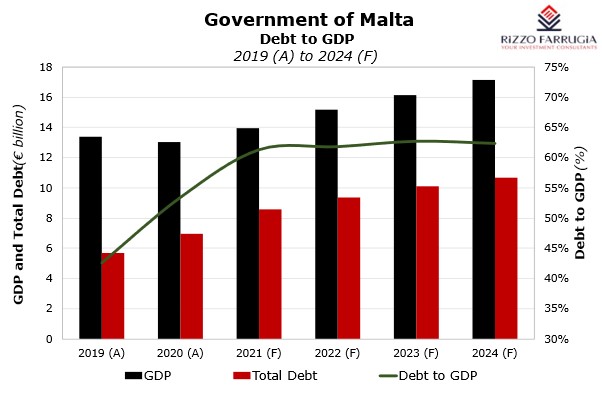 In recent years the new MGS issuance was nearly entirely aimed at institutional investors via an auction process as opposed to the customary approach in earlier years at fixed prices targeted at retail investors. This is not surprising given the very low yields on MGS reflecting the historically low interest rate environment both across the eurozone and also globally. This development was a positive one for local credit institutions given the very high levels of liquidity held across the banking system and the negative interest rates imposed by the European Central Bank on idle monies.

The assessment of a country’s finances is not only important to evaluate from the perspective of whether this elevated level of MGS issuance can continue to take place at such low rates of interest (which would also be dependent on international interest rate movements), but also due to the possible impact on corporate bond yields since the sovereign yield is an important benchmark used when comparing pricing on corporate bonds. This is generally measured in terms of the premium being offered over the sovereign bond (which is generally described as the ‘risk free’ rate) to compensate investors for the additional risks being undertaken when investing in corporates as opposed to buying sovereign bonds.

In this context, it is also worth tracking the recent movements in MGS prices and corresponding yields. The RF MGS Index shows a decline of over 4% since the start of 2021 as a number of MGS prices declined significantly reflecting the upward movement in international sovereign yields as a result of eventual interest rates hikes due to consistent inflationary pressures and the tapering of ultra-loose monetary policy.

While this is merely the result of price movements reflecting international bond market developments, the state of the Government’s finances with the debt to GDP ratio surpassing the 60% level by next year as well as other factors that may impinge on the credit rating and outlook by the international credit rating agencies should not be overlooked. In fact, in August 2021, the rating agency Moody’s confirmed Malta’s ‘A2’ rating but revised the outlook to ‘negative’. The rating agency justified the weakening outlook (which could result in a credit rating downgrade) to the government’s debt burden, the Financial Action Task Force’s greylisting, and the risks linked to the speed of recovery of the tourism sector.

In essence, a downgrade in a country’s credit rating should automatically translate into higher yields (keeping everything else constant) and as a consequence, a further decline in MGS prices. In view of the weakening of the Government’s finances projected in the coming years coupled with the risks of a credit rating downgrade materialising and the additional borrowings required in future years, one would need to understand the potential outcome of such a situation across the bond market. Hopefully, the local credit institutions will continue to strongly support the new MGS issuances in future years given the continued high levels of idle liquidity across the banking system thereby enabling the Government to continue to finance the large majority of its borrowing requirements locally.