International equity markets continued to advance during the past three months with the Dow Jones Industrial Average in the US posting its eighth consecutive positive quarter – the first time that such a positive trend was registered in the last 20 years. Essentially, the rally across global equity markets that began last November following the US Presidential election continued unabated also during the third quarter of 2017.

Despite the elevated geopolitical tensions following North Korea’s missile tests over Japan, an intense war of words between the US and North Korea as well as nuclear threats which could have ended up in warfare, equity prices advanced mainly on the back of improved corporate earnings growth and other economic data indicating a healthier global economy. In the US, economic growth increased at an annualised rate of 3.1% during the second quarter of the year, whilst the unemployment rate in the UK recorded its lowest level since 1975 and eurozone consumer confidence was at its highest since 2001.

In the Eurozone, the equity performances across the main markets were mixed. While Germany’s DAX 30 and France’s CAC 40 registered almost identical gains of just over 4%, Italy’s FTSE MIB rallied by 10.3% during the summer months while Spain’s IBEX edged 0.6% lower possibly due to the prevailing uncertainty amid attempts by Catalonia to obtain independence from Spain, a move which is being blocked by the Spanish central government.

The UK’s FTSE 100 edged up by only 0.14% – a poor performance compared to other global equity markets. This may be explained by the fact that only a third of the revenue generated by the FTSE 100 companies is generated domestically and as such, the larger capitalised companies tend to lag behind during times when the Pound Sterling is rising, since it reduces the value of sales that are translated back into sterling and also makes the goods and services they sell more expensive internationally. In fact, Sterling strengthened after the Bank of England indicated that it would be considering an interest rate hike possibly by the end of the year as inflation rose to 2.9% in August.

In last week’s article it was noted that the MSE Equity Price Index edged minimally lower during the summer months amid heightened activity in some local equities. The local capital market has therefore continued to underperform all global equity markets also during the third quarter of the year.

As indicated earlier on, the sustained rally across international equity markets was the result of the improvement in economic growth in most of the larger economies around the world, low unemployment levels and also on further confirmation of continued robust growth in company profitability in various sectors. European equities also strengthened following the positive outcome of the French presidential election.

In the latter part of the summer, investor sentiment improved on the expectation of the highly anticipated tax reform plan in the US. The new Republican-backed tax reform plan announced in September proposes the lowering of the US corporate tax rate from its current level of 35% to 20% and other provisions allowing companies to repatriate profits from overseas at a reduced tax rate.

In the currency markets, it was noted earlier on that Sterling strengthened during the month of September after the Bank of England indicated that it would be considering an interest rate hike possibly by the end of the year. Despite the partial recovery last month, Sterling still ended the third quarter of the year weaker compared to the euro. Similarly, the US dollar rallied in September after Congress approved a three-month extension of the debt ceiling deadline while the Federal Reserve signalled the possibility of a third rate rise this year and also said it would begin unwinding its USD4.5 trillion balance sheet in October. The Chairperson of the Federal Reserve Ms Janet Yellen stressed that notwithstanding the weakness of core inflation this year, the Federal Reserve still intended to push ahead with further interest rate rises. The US Dollar had weakened to a level of USD1.2033 against the euro on 8 September before recovering to the USD1.18 level by the end of the month presumably as a result of the German election results where Chancellor Angela Merkel’s party secured a fourth term but lost considerable ground to the far-right movement. 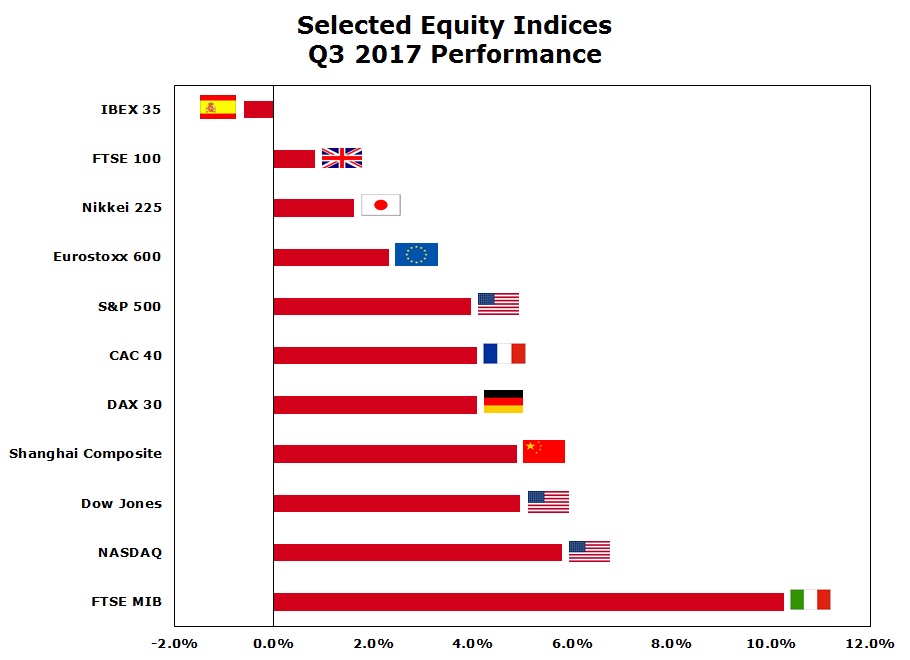 Once again, the euro performed positively against both Sterling and the US Dollar during the third quarter of the year (despite the overall weakness in September) on continued evidence of the improving economic recovery across the euro area. Moreover, the European Central Bank also gave clear indications that despite the continued low level of inflation, it will be discussing some form of reduction to parts of its stimulus measures at the next monetary policy meeting on 26 October.

One of the major highlights during the summer months was the strong recovery of over 20% in the oil price. Brent crude oil hit a 26-month high of just below USD60 per barrel towards the end of September following a faster-than-expected decline in inventories and on increased expectations of an extension to the production cuts by OPEC.

During the next three months (the final quarter of the year), equity, bond and currency markets will all be impacted by monetary policy developments as the three major central banks move towards monetary policy normalisation. The Federal Reserve has already given a strong indication of the possibility of another increase in interest rates in December coupled with measures to reduce the size of its balance sheet and the European Central Bank confirmed that during the next monetary policy meeting it is likely to unveil its plan to begin tapering its quantitative easing programme of €60 billion per month. The Bank of England may also announce an increase in interest rates by the end of the year.

Apart from monetary policy developments, financial markets will also be impacted in the coming months by further news regarding the tax reform in the US as well as political developments in Europe. Following the weaker-than-expected performance of Chancellor Angela Merkel in the German elections, there is still no new German government in place while the situation in Spain is also looking very unstable following the recent vote by the Catalans. Markets must also brace for the upcoming elections in Italy due by May 2018 at the latest.

Finally, it would also be noteworthy to gauge the movements in the markets once an announcement is made on the new Chairperson of the Federal Reserve. US President Donald Trump confirmed that an announcement on who will lead the Federal Reserve in 2018 and beyond could come in the next few weeks. Various sections of the international media reported that the President interviewed former Fed Governor Kevin Warsh and current Governor Jerome Powell in recent days. The current term of Chairperson Janet Yellen will expire in February 2018. During the 2016 presidential campaign, Donald Trump was critical of Janet Yellen and accused her of keeping interest rates too low in order to stimulate economy activity under former President Barack Obama.

International equity markets have continued to perform remarkably well during the summer months culminating in the longest bull market for several years. While some financial commentators continue to claim that a long-overdue correction will take place shortly, other analysts believe that despite the evident monetary policy normalisation due in the months ahead, interest rates will remain much lower than in previous economic cycles.