On 4 May 2017, the shares of PG plc began trading on the Official List of the Malta Stock Exchange following an Initial Public Offering in which Mr Paul Gauci disposed of 27 million shares at €1.00 each, representing 25% of the total issued share capital of the company.

The IPO was an overwhelming success as the company reported that it received applications for over €112 million which translated into a very active secondary market as the shares began trading on the MSE. In fact, during the first week of trading, a total of over 1.98 million shares changed hands, representing 7.35% of the 27 million shares offered as part of the IPO and 1.8% of the entire issued share capital. The enthusiasm from the investing public was also reflected in the share price which immediately rallied to an intra-day high of €1.30 (+30%) on the first day of trading before closing at the €1.20 level – representing a 20% gain from the IPO price of €1.00. The equity continued to perform strongly in the following three months until reaching a new high of €1.40 earlier this month.

The IPO of PG was also a very positive development for the market since it was the first share offering in 4 years providing investors with an opportunity to diversify their local equity component of their investment portfolio. Moreover, it provided depth to the market following various delistings in recent years, namely Crimsonwing plc (May 2015), Island Hotels Group Holdings plc (October 2015) and 6pm Holdings plc (July 2017).

The financial year-end of PG is 30 April and last week the company published its annual financial statements for the 12 months to 30 April 2017.

There were significant changes to the PG Group in the last two years and therefore the comparison between the 2016/17 financial statements and the previous year is very misleading. The group acquired full ownership of the PAVI supermarket in August 2015 (previously it was treated as an associate and was not consolidated in the financial statements since it was only 50% owned) while the PAMA supermarket and its adjacent retail outlets started operations in late October 2015. Meanwhile, the retail mall within the PAMA shopping village, which also include the new Zara home outlet, only commenced operations in November 2016. As such, Zara Sliema was the only business unit which was operational during each of the last two financial years.

It would therefore be incorrect to comment upon the 65.8% increase in the Group’s revenue to €91.7 million. In the Prospectus, the Directors had also prepared forecasts for the year to 30 April 2017 as well as financial projections for the current financial year between 1 May 2017 and 30 April 2018. As such, the annual financial statements published last week should best be compared to the forecasts published earlier this year.

A meeting for financial analysts was held shortly after the publication of the financial statements last Friday. A detailed presentation was delivered by Chairman Mr John Zarb in which he noted that some of the differences between gross profit and EBITDA can be explained due to a redirection of advertising spend into additional promotions which are recognised under ‘cost of sales’ rather than ‘selling and marketing costs’.

The current financial year which commenced on 1 May 2017 is therefore the first year when all 3 business units (PAVI, PAMA and Zara) will be operational for a full 12-month period. More importantly, the Chairman indicated that during the first three months of the current financial year (May to July), overall sales across the group have increased by 10% mainly as a result of the continued strong growth at PAMA as well as the impact of the PAMA shopping mall which was not operational in the comparative period (May to July 2016).

The Chairman indicated that the Directors are reasonably optimistic of attaining the results projected at the time of the IPO. The financial projections indicate overall revenue of €96.3 million (an increase of 5% over the actual figures), EBITDA of €14.4 million (+12.2%) and a profit after tax of €8.4 million (14.3% higher than last year). 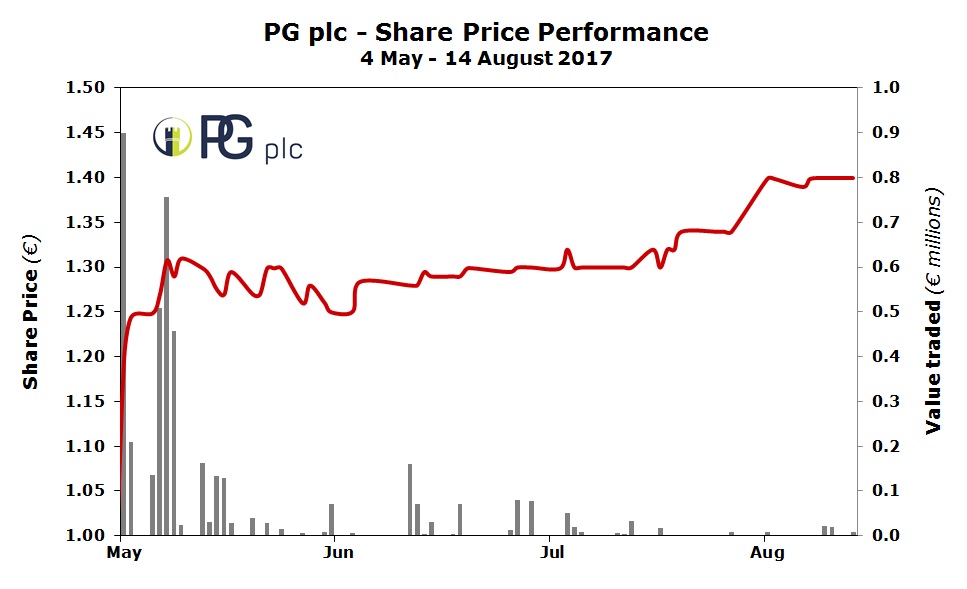 Mr Zarb also re-iterated that in line with the dividend policy declared in the Prospectus dated 27 March 2017, a dividend of not less than 50% of the net profit will be distributed to shareholders. The Prospectus had also indicated that the aim is to start distributing dividends as from the 2017/18 financial year which commenced on 1 May 2017.

PG will be distributing dividends on a semi-annual basis and the Chairman stated that once the interim financial statements as at 31 October 2017 will be approved and published, an interim dividend will be declared and subsequently paid in December 2017.

During the presentation, Mr Zarb also explained the investments being undertaken and the strategy going forward. A major refurbishment will be taking place at PAVI which is intended to be completed by the end of 2017. While a large part of the capital expenditure will be borne by the concessionaires as part of their lease agreements, the PG Group will be responsible for the upgrade to the public areas and changes of certain equipment. The reorganisation will also lead to the creation of two new large retail outlets while a decision still needs to be taken on whether an additional level of parking will be created as well as on a solar panel system as part of the roofing structure of the car park.

The €4.2 million investment in the Alhambra store in Sliema to create one of the largest Zara stores in Europe is proceeding on plan and works are targeted to commence later this year. The enlarged store is intended to be operational in summer 2018.

The Chairman also stressed upon the need for additional management resources following the various changes that took place in recent months as well as a significant investment in IT to replace the core system. Mr Zarb also explained that following the completion of some major investments in recent years, the group needs to focus on certain details to maximise revenue. These include enhancing the online sales channel, better space utilisation at PAMA and optimising the tenant mix at the shopping mall. In fact, a Costa Coffee outlet will be opening while the Next store will be expanded.

In the statement to shareholders ahead of the upcoming AGM scheduled for 19 October, the Chairman also states that the management and the board of the group “are equally focused on identifying new growth opportunities that may be pursued both by expanding the group’s existing businesses in additional locations or by undertaking new ventures judged to be within our competence”. During the presentation, Mr Zarb explained that ongoing discussions are taking place on various fronts but he again emphasised that any new venture must ensure that it can be financed comfortably without impeding the dividend flow to shareholders.

The many investors who enthusiastically participated during the IPO now await the commencement of dividend distributions as from December 2017 as well as news of any potential new projects being embarked upon. Hopefully, other businesses will recognise the benefits of an IPO (including the fiscal initiatives announced in the last Budget) and emulate the decision of Paul Gauci to seek a public listing for strategic planning purposes.