In last week’s article, I documented the weak start to the year for the US equity market with the S&P 500 index declining by 5.3% after first dropping into ‘correction’ territory and then recovering during the last two days of January.

The sovereign bond markets in the US, UK and the eurozone also performed poorly since the start of the year as it became clearer that the major central banks will be tightening monetary policy following the spike in inflation. As a result, bond yields rallied to their highest levels in many years.

The Federal Reserve indicated its intent to raise interest rates next month following a rapid rise in inflation to 7.5% in January which was the strongest reading since February 1982. The Chairman of the Federal Reserve recently also refused to rule out an aggressive sequence of increases to follow the initial rate hike in March. Markets are now expecting five interest rate hikes of 0.25% each during the course of 2022 with some economists also suggesting up to seven or even eight rate hikes to combat the prevailing stubbornly high inflation.

Across the eurozone, the major movement in yields took place on 3 February when during the press conference following the monetary policy meeting of the European Central Bank, President Christine Lagarde acknowledged that the inflationary situation has changed dramatically following a record high reading of 5.1% for the month of January. This was interpreted by the markets that the ECB was not ruling out interest rate hikes this year which would imply an end to the quantitative easing programme much earlier than expected. The ECB has been buying around €80 billion per month of bonds throughout the pandemic. This was expected to reduce to €40 billion per month as from April 2022, €30 billion as from June 2022, and reach an open-ended commitment of €20 billion in September 2022.

In fact, money markets priced in a very strong probability of an increase of 10 basis points in the ECB’s deposit facility rate by June 2022 and more than 40 basis points in interest rate hikes by the end of 2022. If this were to take place, it would be the first interest rate hike by the ECB since 2011. The ECB’s deposit facility rate has been stuck at minus 0.5% since 2019 and has been below zero since 2013.

The benchmark sovereign bond across the eurozone is that of Germany. The yield on the 10-year German Bund rose to +0.30% on 11 February (the highest level since early December 2018) representing a strong recovery from the level of minus 0.4% only two months ago. In Italy, the 10-year bond yield jumped to just under 2%, the highest since May 2020, compared to the all-time low of 0.43% recorded this time last year. All euro area bonds with maturities of five years and longer now carry positive yields compared to the situation when all short to medium term euro sovereign bonds were in negative territory during the worst months of the pandemic.

A few days after the 3 February monetary policy meeting, the President of the Dutch Central Bank and a member of the European Central Bank’s Governing Council commented that he expects the ECB to raise interest rates during the fourth quarter of this year. He also argued in favour of winding down the central bank’s asset purchasing program as quickly as possible.

Despite further comments by the President of the ECB Christine Lagarde on Monday 7 February that there is no need for large-scale monetary policy tightening in the euro zone as inflation is set to fall back and could stabilize around 2%, yields continued to move higher. Last week, the yield on the 10-year German bund continued to rise to an over three-year high of +0.3%. Moreover, the ECB’s chief economist Philip Lane also opined that eurozone inflation will come down “without a need for a significant adjustment in monetary policy”.

The president of the ECB continued to downplay expectations late last week when she explained that the bank will not rush into raising interest rates and will pursue any policy tightening slowly. Christine Lagarde was quoted as having said that “If we acted too hastily now, the recovery of our economies could be considerably weaker and jobs would be jeopardized”. 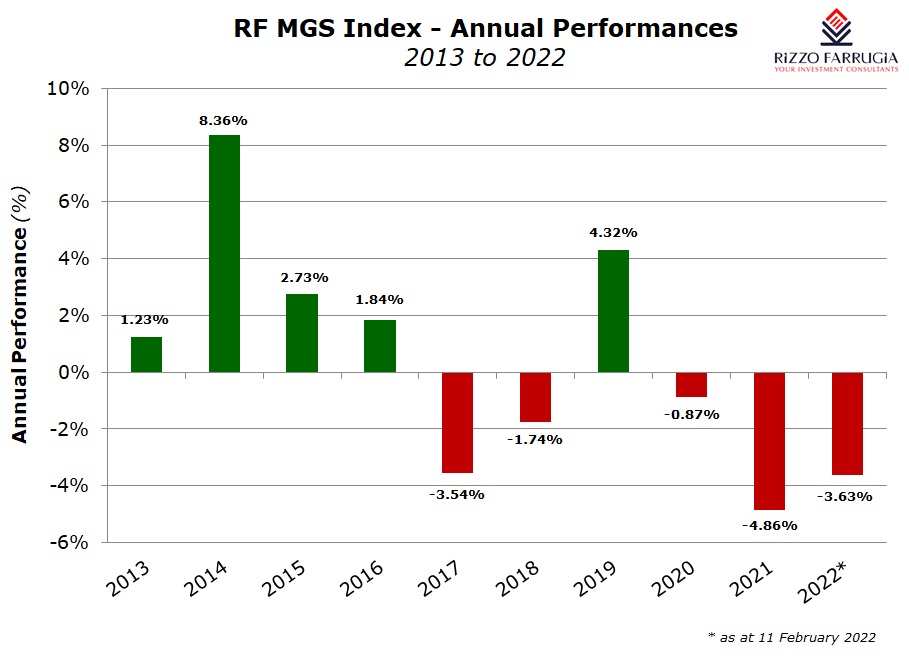 As explained in several of my articles in the past, there is a clear correlation between movements in yields across the eurozone and those on Malta Government Stocks. The sharp upward movement in yields over recent weeks was also reflected in Malta as the Central Bank of Malta revised MGS prices downwards in a consistent manner over the past two weeks.

The yield on the 10-year MGS moved up to 1.36% compared to a level of 0.80% at the start of the year. Similarly, the yield on the longer-dated MGS’s also moved sharply higher with a corresponding sharp decline in MGS prices. Few investors may realise the actual extent of the declines in prices in such a short period of time. It is worth highlighting that all MGS’s maturing from 2031 onwards all dropped in excess of 6 percentage points since the start of the year with the main declines happening since early February. For example, the price of the 5.2% MGS 2031 dropped from 141.86% (as at the end of 2021) to 135.33% and the 3% MGS 2040 saw its price decline from 126.61% (also as at the end of 2021) to just over 118%. This would represent a sharp diminution in value for those investors holding sizeable holdings of such securities within their investment portfolios.

It is also interesting to note that the prices of the MGS’s issued over the past two years have recently all dropped to below their par value (100%) with the longest-dated bond for example (the 1.80% MGS 2051) sliding to 90.58%.

Incidentally, last week the Treasury of Malta announced the issue of €140 million in new MGS subject to an overallotment option of an additional sum of up to a maximum of €100 million. Yet again, these are directed at institutional investors and the three bonds have 5-year, 10-year and 30-year maturities. Given the significant movements in yields over recent weeks, it will be interesting to gauge the appetite and pricing in the upcoming auction process.

Following the major developments over recent weeks that led to sharp declines across sovereign bonds including those in Malta, investors’ attention is now very much set on the upcoming meeting of the ECB on 10 March where a clearer indication of the winding down of the QE programme would be expected as the central bank is expected to update its economic forecasts for the next two years. The statements made by the ECB officials and the economic data being published should lead to continued volatility across the bond markets. It is inevitable though that with the era of ultra-loose monetary policy measures coming to an end, yields need to correct reflecting the new inflationary environment that we are witnessing.