Malta International Airport plc was one of the companies that published its interim financial statements last week during the start of the interim reporting season. While it was easily anticipated that the company would report a strong improvement in its financial performance (pre-tax profit of €16.7 million compared to a loss of €3.9 million in H1 2021) given the encouraging recovery in passenger figures especially between April and June as previously reported in its monthly traffic updates, the main highlight was the resumption of financial guidance to the market.

The airport operator announced that given the evident recovery in air travel in recent months with passenger movements amounting to 2.35 million during the first six months of 2022, the company expects total passenger movements for 2022 to exceed 5.4 million.

In my article some weeks ago, I highlighted that it was evident from the recent trends as well as from forecasts presented by MIA’s parent company (Vienna International Airport) that passenger movements at MIA would exceed 5 million during 2022. The official guidance provided last week by MIA of an estimate of over 5.4 million passenger movements during 2022 confirmed this. If it were to be achieved, it would be superior to the total traffic handled in 2016 of 5.1 million but inferior to the level of just over 6 million in 2017. The highest level of passenger traffic was registered in 2019 when 7.3 million movements were registered.

Based on this comparison, it is evident that during 2022 MIA is expecting to generate higher revenues and EBITDA than in 2017 despite the lower amount of passenger movements. In fact, this trend is already evident in the actual financials for the first half of 2022 as the airport operator achieved a record EBITDA margin of 62.4% compared to the previous record of 60.5% in H1 2019, although this level of profitability includes the positive impact of the COVID Wage Supplement which amounted to €1.1 million. 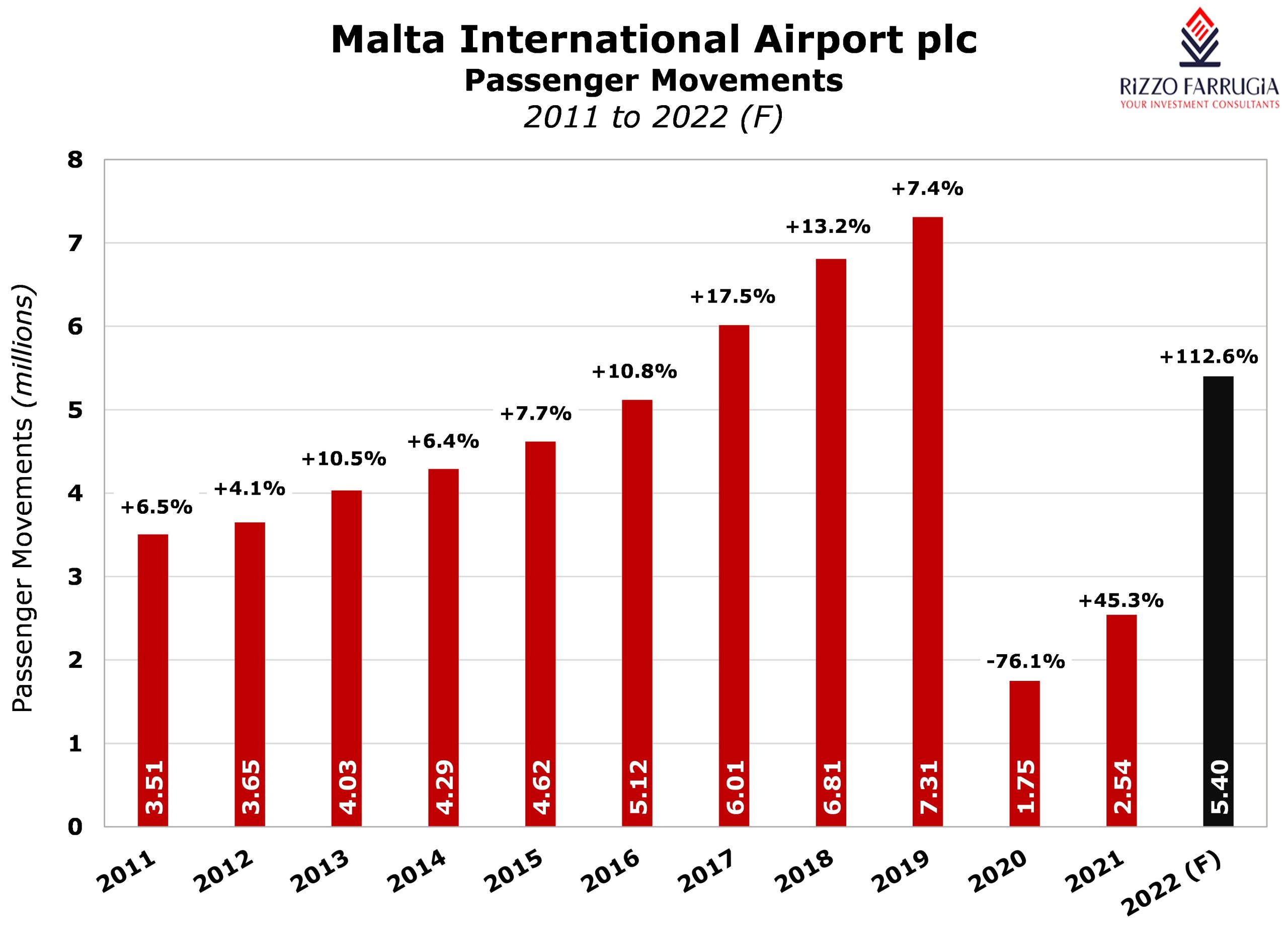 Based on these latest forecasts, it is being estimated that in 2024 MIA would be surpassing the previous record revenue of €100.2 million in 2019 when passenger volumes amounted to 7.3 million.

The recent downgrades made by this foreign investment house indicates the heightened uncertainty across the travel industry in the first half of the year as well as the quicker-than-expected recovery during the start of the summer season. MIA’s guidance for 2022 of revenue exceeding €82 million is well-above the May 2022 revised forecast as mentioned above, and only marginally above the original forecasts by the foreign analyst late last year. This may have been unimaginable at the start of the year when MIA reported revenue of only €47.4 million during 2021.

Despite the strong financial performance in H1 2022, MIA announced that it will not be distributing an interim dividend to shareholders. The company noted that this decision was taken in the context of the prevailing macroeconomic uncertainties and the challenges within the aviation industry. However, the company also highlighted that this stance will be reviewed at the end of the year when it would be in a better position to assess the situation against the targets established for the year.

Given the very strong financial situation of the company with no borrowings and deposits amounting to €38.4 million as at June 2022 even before the start of the peak summer season which is the most profitable period for MIA, it is hoped that MIA will resume the distribution of dividends to shareholders by declaring an interim dividend during the fourth quarter of the year. Prior to the pandemic, MIA had regularly distributed semi-annual dividends to shareholders ever since its Initial Public Offering in 2002 and it is hoped that this trend will resume in the coming months for the benefit of all investors and overall market sentiment across Malta. MIA shareholders would therefore need to monitor the upcoming monthly traffic results closely as this promises to be a reliable indicator of the company’s ability to achieve its financial targets and thereby ensure that dividend payments are resumed.