In the aftermath of the publication of the latest financial statements from the world’s two largest technology giants during the last week of October, Microsoft tipped Apple once again as the world’s most valuable publicly traded company as its market capitalisation surpassed the USD2.5 trillion mark.

Microsoft and Apple have vied for the position of the most highly valued public company since the iPhone manufacturer first overtook its tech rival in May 2010 and retained its position until early December 2018. Microsoft’s superior market value remained largely intact until mid-October 2019 as Apple regained the number one position until the pandemic-induced sell-off which took place in the first part of 2020. At the start of the market rally which commenced in the second half of March 2020 until the end of May 2020, Microsoft was once again atop Apple, but the situation quickly reversed as Apple dominated the rest of 2020. In fact, Apple’s equity performed stronger than that of Microsoft in 2020 with a share price gain of 71% compared to Microsoft’s 40% gain.

In August 2020, Apple became the first publicly traded company in the US to reach a USD2 trillion market capitalisation – a remarkable achievement since it only took just over 2 years for the iPhone maker to double in value after reaching the USD1 trillion milestone in early August 2018.

However, Microsoft strongly outperformed Apple since the start of 2021 as the software giant saw its share price jump by almost 50% while Apple ‘underperformed’ with a gain of just over 15%.

Despite the mixed reaction by markets to the latest financial statements of both companies during the end of October, the figures published paint an extraordinary picture of the absolute strength and dimension of these tech giants.

The financial results published by Apple on 28 October for the fourth quarter of their financial year to 30 September show that total revenue rose by 28.8% to USD83.4 billion. Although this was a record level of revenue for the fourth quarter of their financial year, it was slightly below consensus estimates as supply constraints hampered growth which according to CEO Tim Cook impacted overall revenue by an extraordinary USD6 billion during the three-month period to September. Product sales (primarily the iPhone) rose by 29.8% to USD65.1 billion with revenue from the services division growing by 25.6% to USD18.3 billion. Operating profit rose to USD23.8 billion compared to USD14.8 billion during Q4 2020 and net profits beat expectations as they surged by 62% to USD20.5 billion.

Despite the robust financial performance, Apple shares declined in the aftermath of the publication of the financial results as the guidance for the current quarter (which is the most important period in the company’s calendar year) was weaker than expected. The company’s CEO claimed that the supply shortage (arising from chip shortages and Covid-related manufacturing disruptions) will leave a larger impact on revenue compared to the USD6 billion of the previous quarter.

Microsoft published its Q1 financial results to 30 September 2021 two days earlier than Apple. The software company reported that Q1 revenues rose by 20% to USD45.3 billion which surpassed market expectations. Quarterly revenue growth was at its highest level since 2014. Operating profit rose 24% to USD20.2 billion and net profits surged by 48% to USD20.5 billion. Microsoft generated free cash flow of USD18.7 billion during the first quarter of their 2021/22 financial year and had net cash of USD77.3 billion as at 30 September 2021.

Microsoft’s market cap has increased by more than fivefold since the current CEO Satya Nadella took over in 2014. In the previous decade, the share price of Microsoft had barely moved and many financial commentators and industry analysts were highly critical and sceptical of the company’s future as other technology companies emerged and became more valuable than Microsoft. 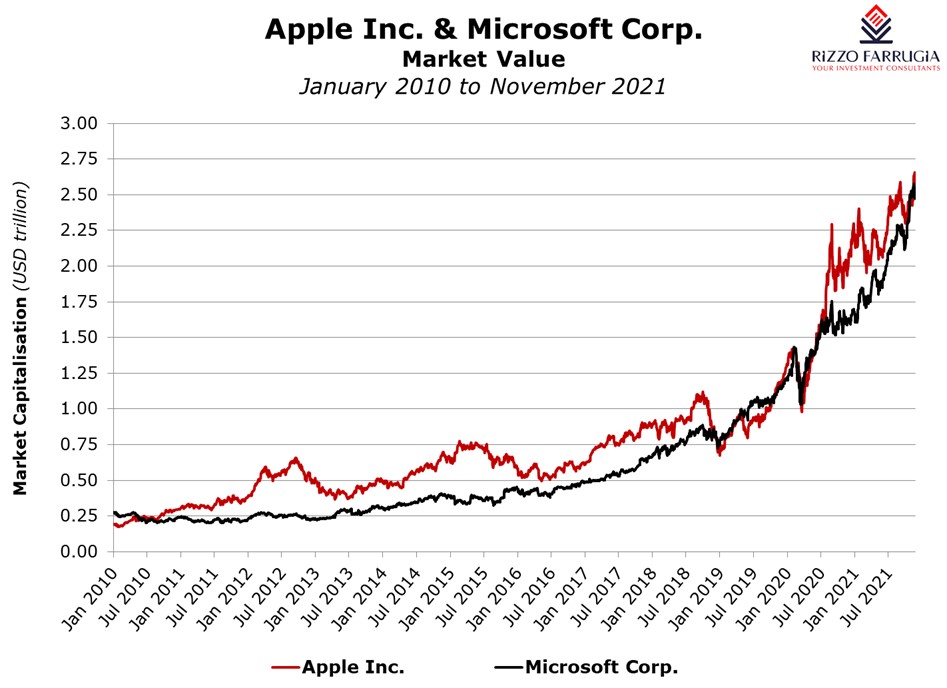 Many of the businesses revolve around Microsoft’s cloud-computing arm Azure which was launched in 2010 and has grown into the internal computing backbone for Microsoft’s applications, as well as a product to sell to customers.

The cloud computing arm is anticipated to continue to remain a key business segment for Microsoft in the years ahead. Although Azure is estimated to make up only circa 10% of Microsoft’s USD53 billion in annual operating profit, most analysts closely monitor the growth rate of the cloud business. This may not be surprising given the fact that the global cloud business is expected to grow by nearly 20% per annum in the years ahead as most companies worldwide are expected to move to the cloud. The current estimated annual market spend on cloud services of circa USD240 billion is expected to reach USD1 trillion in the years ahead.

One of the long-term goals of Microsoft is for the Azure cloud-computing arm to match or overtake the market leader Amazon Web Services (AWS). Recent data available online has estimated that during the third quarter of 2021, the most popular vendor in the cloud infrastructure services market was AWS with a 32% market share followed by Microsoft Azure at 21% and Google Cloud at 8%.

Apple’s current CEO Tim Cook has been at the helm for 10 years and no other CEO in the US has created as much total shareholder value as Mr Cook. When he took over the reins following the demise of Steve Jobs, the company had a market value of USD349 billion and this has multiplied to just under USD2.5 trillion.

Although several analysts have been predicting over recent years that Apple’s financial performance will suffer due to the difficulty in maintaining the high growth rates from its dominant revenue contributor (the iPhone), the smartphone is still very profitable for Apple as the company sold over 200 million units last year. Moreover, Apple was extremely successful at growing its services business (including the App Store and Apple Music) whose sales have surged from USD8 billion in 2011 to USD65 billion in the past four quarters as Apple now has 745 million paid subscribers in the services segment.

The market for smartphones will undoubtedly eventually mature and Apple will naturally find it harder to continue to grow rapidly until another major innovative product is launched that can match the success of the iPhone. One of these new products could be augmented-reality spectacles that could be officially launched by the end of 2022. However, the more revolutionary product could be in the automotive sector as the company has been reportedly working on both an electric and also a self-driving vehicle over recent years. Only a few days ago, an international media report indicated that Apple has set an internal deadline to launch an autonomous vehicle by 2025.

Both these tech giants have registered outstanding growth in recent years following important business transformation strategies by both CEO’s. Despite the sharp technological advances in recent years and the emergence of new important entrants in the technology space, it is difficult to predict who can dethrone Microsoft and Apple as the most valuable publicly traded company in the future.