In last week’s article I mentioned the good momentum in the corporate bond market with various issuers tapping the bond market for the first time in recent months.

As the market expands and investors add new names to their portfolios to decrease concentration risk to any single entity or group of companies, it is equally important for these investors to also keep track of the evolving financial metrics of the various issuers or guarantors to the bonds in which they are invested.

In one of my articles some time ago, I had also explained that new regulatory obligations imposed on most of the new bond issuers warrant the publication of a Financial Analysis Summary (FAS) at the time of the launch of the bond issue as well as an updated report annually within two months from the publication of the annual financial statements.

Apart from an explanation of the main company developments as well as a review of the previous year’s financial statements together with a comparison to the original forecasts, in my view the most important part of the FAS is the requirement for companies to publish its financial forecast. This enables investors to gauge the expected movements in the company’s financial performance and the resultant impact on the most important financial indicators for bond investors, namely the interest coverage ratio and the level of indebtedness.

In the first of a series of articles to highlight the financial projections and credit metrics of several bond issuers, I thought it would be best to start off with the hotel sector given the large amount of bonds issued by companies within the tourism sector.

The Corinthia Group currently encompasses three issuers within the tourism sector, namely Corinthia Finance plc, International Hotel Investments plc and Island Hotels Group Holdings plc. The latter company is being merged with IHI and since IHI is the main holding and operating company of the large majority of hotels within the Corinthia Group, it would be best to provide a short review of the main findings within the latest FAS of IHI published a few months ago. For the first time, the 2017 financial statements will include the consolidation of the NLI Holdings Group, the owner of the Corinthia Hotel London, the penthouse adjacent to the London property as well as the owner of the property in Brussels currently being refurbished ahead of the opening of the Corinthia Hotel Brussels. IHI owns 50% of this company but the financial performance of NLI is being consolidated with that of IHI as from this year. The 2017 forecasts anticipate an EBITDA of €62.4 million for IHI (excluding any contribution from Golden Sands which is treated as an equity accounted investment). Although this represents an increase of 69.9% from the previous year, it is not a good comparison due to the consolidation of NLI as from 2017. The interest coverage ratio is anticipated to increase to 2.68 times in 2017 from 1.39 times in 2016.

IHI’s gearing level (calculated as total debt divided by total debt plus total equity) stood at 38.5% as at 31 December 2016 and is expected to edge higher to 39.2% in 2017. This is a good metric showing the high level of shareholders’ funds within the company. However, the net debt to EBITDA multiple as at the end of 31 December 2016 stood at 10.1 times which is high and indicates that a higher level of revenue generation is indeed required in the years ahead to be in a position to begin repaying borrowings.

AX Holdings Limited, as the guarantor of bonds in issue by AX Investments plc, is now mostly dependent on the contribution from the various hotels within the portfolio. AX Investments last issued a bond in 2014 and the annual financial statements together with the updated FAS’s published since then show a strong improvement in the Group’s financial performance mainly as a result of the positive trend across the local tourism industry as well as the initial contributions from the new care home and retirement village (Hilltop) launched a few years ago. The financial year of AX Holdings comes to an end on 31 October and in the FAS published in April 2017, the group projected that overall revenues would increase to €48.4 million during the 2017 financial year and an EBITDA of €17.2 million would be generated helping the interest cover to increase from 3.6 times in 2016 to 4.6 times in 2017. Given this expected improvement in EBITDA, which is also anticipated to be larger than the 3.7% increase in net borrowings to €66 million, the Group’s net debt to EBITDA ratio is also expected to improve to 3.84 times in the financial year ended 31 October 2017 compared to 5.03 times in the previous financial year. 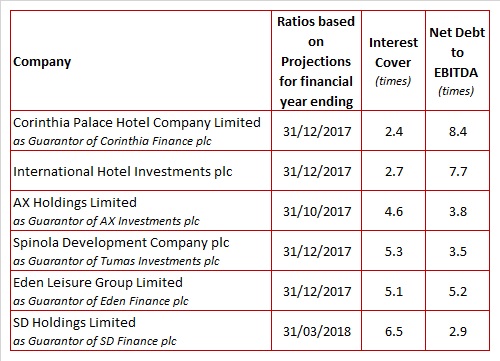 The three other issuers (Tumas, Eden and SD) all launched new bonds during the course of 2017.

Tumas Investments plc is the financing arm of Spinola Development Company Limited (the guarantor of the bonds) which in turn is a wholly-owned subsidiary of Tumas Group Company Limited. The business of Spinola Development revolves around the development, management and operation of the Portomaso Complex in St Julian’s. SDC is expected to register record results in 2017 as revenues are expected to rise by 9.5% to €45.9 million whilst EBITDA is expected to improve by 10.3% to €16.8 million. The improved performance reflects a full twelve-month contribution of the Hilton Malta hotel as well as the higher rates which are now being charged following the extensive refurbishment in 2016. Spinola Developments registered an interest cover of 4.6 times for 2016 which is expected to go up to 5.3 times in 2017 in line with the improved performance. Furthermore, the guarantor’s level of debt is well supported by its cash earnings and equity. In fact, the net debt to EBITDA ratio was just over 3 times for 2016 which  is anticipated to deteriorate slightly to 3.5 times in 2017. A net debt to EBITDA multiple of 3.5 times in 2017 implies that SDC’s net borrowings may be repaid in three and a half years assuming current financial estimates are achieved. In addition, a gearing ratio of 41.6% as at the end of 2016, which is estimated to increase to 45.2% by the end of 2017 following the additional debt taken on for the construction of the second business tower, is considered to be acceptable given the capital-intensive business of the guarantor.

Eden Finance plc is the finance vehicle of Eden Leisure Group Limited which is the guarantor of the bonds and owns a portfolio of businesses within the hospitality and entertainment industries including the InterContinental Malta. The overall revenue of Eden Leisure Group for 2017 is projected to increase by 12% to €35.2 million, primarily due to a projected increase in revenue generated from the InterContinental Malta. EBITDA is projected to increase by 29% to €10.8 million which should help the interest cover to improve from 4 times to 5.1 times. Likewise, the improvement in EBITDA is also expected to lead to a reduction in the Group’s net debt to EBITDA ratio from 5.9 times in 2016 to 5.2 times in 2017.

SD Finance plc is the finance arm of SD Holdings Limited (the guarantor) which in turn is the parent and holding company of a number of subsidiaries principally engaged in the ownership and operation of two all-inclusive four star hotels, the db Seabank Resort & Spa situated in Mellieha and the db San Antonio Hotel & Spa in St Paul’s Bay. The group’s financial year end is 31 March and the 2016/17 financial statements were published after the launch of the bond issue earlier this year. The SD Group reported a 9.3% increase in revenue to €46.6 million largely reflecting the continued growth of the two 4-star hotels which are run on an all-inclusive basis. The improved level of income also led to a 5.1% increase in EBITDA to €18.7 million. Meanwhile, the Directors project that revenues will improve by 0.4% to €46.8 million in the current financial year to 31 March 2018 while EBITDA is also anticipated to rise by a further 7.7% to €20.1 million (including share of results from associates). The SD Group reported a strong interest cover of 7.1 times during the financial year 31 March 2017 and this is anticipated to edge lower to 6.5 times in the current financial year ending 31 March 2018. The gearing ratio (calculated as net debt divided by the sum of net debt and total equity) is expected to remain relatively unchanged at 48% during 2017/18 while the net debt to EBITDA ratio of 3.2 times as at 31 March 2017 is projected to decrease further to 2.9 times by the end of 31 March 2018. This implies that the overall net borrowings may be repaid in less than three years assuming the current financial estimates are achieved and this performance will be maintained in future years.

Given the strong financial performance of the local tourism industry, it would be surprising if these companies do not achieve their current year financial projections. Investors who hold bonds in each of these companies should therefore eagerly await the publication of the annual financial statements in the first half of next year. It would then be equally interesting to understand their financial expectations for 2018 which will be published in the next FAS’s.