The financial year of PG plc runs from 1 May to 30 April. Last week, PG published its interim financial statements for the 6-month period to 31 October and held a virtual meeting for financial analysts providing a detailed review of the supermarkets and retail businesses as well as the Zara® and Zara Home® franchise operations.

These financial statements were of great interest to PG shareholders and the market at large to gauge the impact of COVID-19 on the performance of the group.

The April 2020 annual financial statements published in the summer had already revealed the immediate impact of COVID-19 during the last two months of the 2019/20 financial year especially on the retail and catering outlets within the PAMA and PAVI shopping villages as well as the Zara® and Zara Home® franchise operations. All retail outlets were closed from 23 March until 3 May in line with health authority regulations.

As such, the results for the first six months of the 2020/21 financial year need to be analysed in the context of the timing of the pandemic and closure of retail outlets which overlapped from one financial year to the next.

Although retail outlets were allowed to re-open in early May which coincides with the start of the 2020/21 financial year, PG also waived all rents to tenants for the month of May at the retail and catering outlets within the PAMA and PAVI shopping complexes. Moreover, the company explained that they exceptionally only charged rent to these tenants based on their level of revenue and did not enforce the contracted minimum rent clauses that are stipulated within their agreements. This resulted in a decline of over €300,000 in rental income during the period from 1 May to 31 October 2020.

Moreover, although the Zara® and Zara Home® franchise operations also opened again in early May, activity was subdued until mid-June due to the time that was necessary to replenish stocks. The flagship store in Sliema was also particularly negatively impacted by the sharp slowdown in tourism. Although the financial statements published last week show a 15.8% decline in overall sales at the franchise operations, the company highlighted some interesting trends with online sales more than doubling during the past six months and Zara Home® performing strongly with a growth of 26%.

In its presentation to financial analysts, the company explained that revenue within the PAVI complex registered a growth of 14.4% between 1 May and 31 October while PAMA’s revenue increased by 6.6%. The growth in revenue by both complexes led to a 3% increase in operating profit of this business segment to €6.6 million despite the reduction in rental income of just over €300,000. The operating profit margin eased to 12.6% compared to 13.4% in the comparative period reflecting the lower rental income but also the incidence of COVID-related costs as well as shifts in consumer demand and the sales mix of both supermarkets.

The segmental analysis also shows that the operating profit margin of the Zara® and Zara Home® franchise also dropped from 16.4% to 15.5% due to the decrease in sales as most costs are fixed and also due to the fact that online sales attract a lower margin. It is worth highlighting that the operating profit of €1.4 million compared to €1.7 million in the comparative period was positively impacted by the wage support provided by the Government.

In view of the 5.9% increase in operating costs, PG’s total operating profit eased by 1.9% during the first half of the 2020/21 financial year to €7.94 million with the overall operating profit margin declining to 13% from 13.9% in H1 2019/20 reflecting the much lower contribution from the ‘franchise operations’. 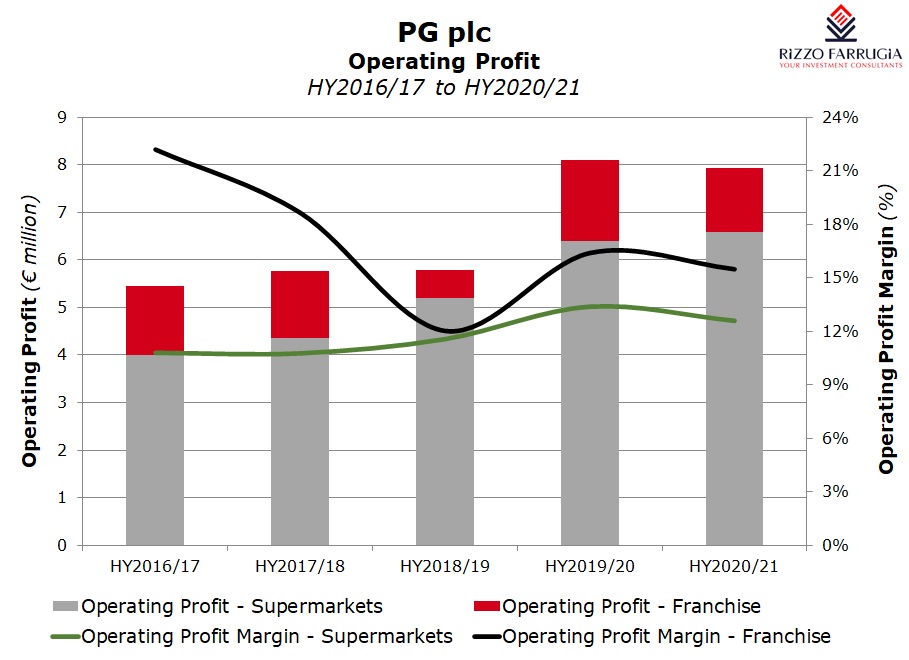 Although PG’s net profit declined by 3.1% to €5.14 million, this is better than originally anticipated as the directors noted in last week’s announcement that they were expecting a “material shortfall in profitability” during the first half of the current financial year.

As I explained in my article reviewing the April 2020 annual financial statements, PG’s management had prepared a “hypothetical exercise” at the start of the 2020/21 financial year estimating a reduction in profits during the first half of the year with a strong recovery in the second half as the comparative figures for the last two months of the 2019/20 financial year reflect the COVID-19 impact in March and April 2020.

The actual performance during the period from 1 May to 31 October 2020 was much better than expected and augurs well for the current financial year. PG’s Chairman Mr John Zarb also indicated that the performance since 1 November is also “very encouraging” with PAMA currently experiencing a 14% growth in revenue and PAVI at 19%. In a media article last week describing how supermarkets in different localities were impacted by the pandemic, PG’s deputy CEO Mr Malcolm Camilleri claimed that the group is anticipating its best December ever.

Ever since the IPO in the first half of 2017, the company distributed dividends on a semi-annual basis with an interim dividend generally payable by mid-December and a final dividend payable in July. On 10 December 2020, PG paid out an unchanged net interim dividend of €0.0185185 per share (equivalent to a total distribution of €2 million) for the first half of the 2020/21 financial year. During last week’s virtual meeting, PG’s Chairman reiterated the company’s plans to maintain a 50% dividend payout ratio which he claimed to be a fair proposition. Mr Zarb believes that on the one hand, such a policy rewards shareholders adequately but also allows the company to build up additional reserves to continue to fund its expansion strategy. The overall dividend distribution has gradually increased over the past three financial years and a similar rise should be expected for the current financial year to 30 April 2021 in the event that PG manages to register another record financial year.

The retention of profits is also helping the company reduce its overall indebtedness. As at 31 October 2020, the net debt of the group amounted to only €9.4 million following the early repayment of bank borrowings once again in view of the continued strong cash generation.

PG has been among the most resilient companies during the pandemic and in fact it distributed an unchanged €2.8 million dividend to shareholders in July and it also maintained its interim dividend distribution unchanged to shareholders earlier this month. It is clearly evident from last week’s announcement and the presentation that the group is on track to register another record financial performance which would see it generate in excess of €9.6 million in net profits during the 12-month period to 30 April 2021. This will enable the company to grow its dividends and hopefully proceed with one or more of the opportunities identified to expand its business which the company is reportedly “actively exploring”.