Last Wednesday 18 December, PG plc published its interim financial statements for the six-month period between 1 May and 31 October 2019. Although the headline figures show remarkable growth over the comparative period last year (revenue up by 17% and profits after tax climbing by 28%), it is worth highlighting that the financial results for the first half of the 2019/20 financial year published last week are not directly comparable with those of the previous financial period from May 2018 to October 2018 as the company’s flagship Zara® store located in Sliema was closed for a sizeable extension and complete refurbishment for most of the comparative period between July and November 2018.

The day after the publication of the interim financial statements, a presentation was delivered to financial analysts by PG’s Chairman Mr John Zarb providing a useful insight behind the headline figures and also on the group’s opportunities for expansion.

During the six-month period ended 31 October 2019, PG reported a 16.8% increase in revenues to €58.1 million. The PAVI and PAMA supermarkets and associated retail operations within both complexes registered a 6.4% increase in turnover to €47.7 million, representing 82.1% of overall revenue. Although PAMA is the single largest generating asset of PG, the highest growth was registered at the PAVI complex with a 14% increase in revenue following the positive impact of the gradual refurbishment in recent months which is now nearing completion. Meanwhile, revenue within PAMA increased by only 1% as the supermarket business showed a stabilisation of operations following the strong growth since launch while a growing rental income stream was generated from the retail units.

Revenue from the Zara® franchise operations amounted to €10.4 million during the six-month period to 31 October 2019 compared to just €4.9 million in the first half of the previous financial year. In order to highlight the effectiveness of the €10.2 million investment in the flagship store in Sliema, Mr Zarb explained that the level of sales achieved during the period under review represents a growth of 37.7% compared to the €7.5 million turnover achieved during the six-month period ended 31 October 2017 before the extensive refurbishment and expansion carried out during 2018. PG’s Chairman also indicated that overall revenue from franchise operations for the entire 2019/20 financial year should exceed €22 million compared to €16.5 million in the 2017/18 financial year when the flagship store in Sliema was operational for an entire financial year. Mr Zarb also argued that the additional EBITDA from the Sliema store estimated at more than €1.35 million over the entire year fully justifies the sizeable investment in the flagship store carried out last year.

The reopening of the enlarged Zara® store in Sliema led to a significant increase in profitability for the franchise operations business unit which generated an operating profit of €1.7 million compared to €0.59 million in the same period last year. Despite the additional costs of the significantly larger flagship store, the operating profit margin jumped to 16.4% compared to 12% last year and 18.7% in the first half of 2017/18.

During last week’s presentation, PG’s Chairman indicated that the company will be carrying out an investment of up to €2.5 million within the PAVI complex relating to the construction of an additional floor of parking which will be roofed over by a system of photovoltaic panels. Works on this extension will commence once permits are obtained from the Planning Authority. Moreover, Mr Zarb explained that the company estimates that it will generate additional rental income of circa €100,000 per annum as new retail and catering space is being created within PAVI.

Mr Zarb also highlighted the very strong cash generation during the first half of the 2019/20 financial year. In fact, cash generated from operations amounted to €9.7 million compared to €5.1 million in the same period last year. 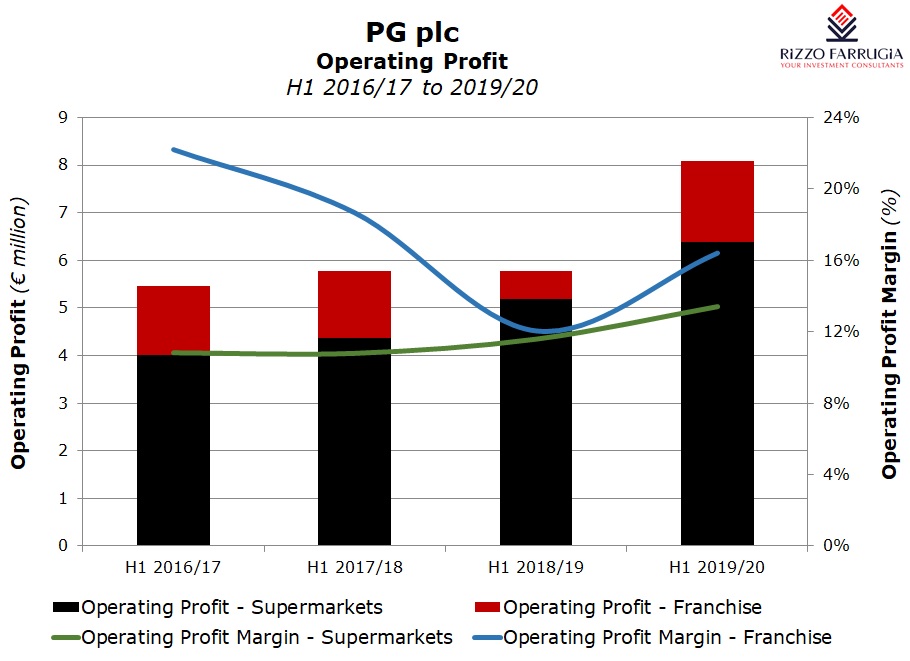 Although PG is seeking further opportunities for expansion, the Chairman explained that the company may consider reducing its overall level of bank borrowings in the coming months. Overall net bank borrowings as at 31 October 2019 amounted to €17.5 million compared to €22 million at the end of the last financial year on 30 April 2019. PG is not a highly leveraged business with a net debt to EBITDA of only 1.7 times as at 30 April 2019. This important ratio should improve substantially by the end of the current financial year as a result of both a sizeable increase in EBITDA as well as a reduction in bank borrowings.

The low level of leverage coupled with the strong cash generation places PG in a very good position to take on additional investments in its core business. In fact, the company confirmed that it is currently in intense negotiations on two potential projects. During last week’s meeting, PG’s Chairman indicated that both these projects relate to possible new investments in the supermarkets and associate retail business. While the formula will be similar to the PAVI and PAMA complexes, the possible projects in hand are smaller than the current complexes with an area of circa 1,500 sqm dedicated to the supermarket business compared to circa 5,000 sqm at both PAMA and PAVI.

Since the IPO in early 2017, PG had stated that it will distribute a minimum of 50% of annual profits to shareholders by way of dividends. The first interim dividend in December is estimated at 40% of the annual dividend with the balance distributed to shareholders via a second interim dividend in July shortly before the publication of the annual financial statements in August. Mr Zarb also noted that following the €2 million dividend paid to shareholders earlier this month, a dividend of at least €3 million will be distributed in July 2020. Should PG distribute a total of €5 million in respect of the current financial year, this would result in a consistent year-on-year increase in dividends for the past three financial years since the IPO with total net dividends per share of €0.0394 in 2017/18, €0.0417 in 2018/19 and €0.0463 in 2019/20.

PG also made reference to the current political crisis which they stated is of ‘obvious concern’ and needs a ‘quick resolution’. While they warned that this may impact the performance in the future, it is interesting that despite the indications of a severe negative impact on the overall retail sector, PG’s outlets have so far continued to perform very positively in recent weeks. PG’s chairman also made reference to the record performance by the Zara® store in Sliema on Black Friday.

The most noteworthy aspect in last week’s announcement was the company’s quest for new opportunities for expansion and the reference to the intense negotiations on two potential projects. Earlier this year, PG had also indicated that it is seeking to extend the current PAMA Shopping Village on an adjacent site and is awaiting feedback from the Planning Authority. Despite the current gloom among the wider retail sector, PG’s Chairman explained that the company still has a lot of demand for leases of space by prospective tenants within the PAMA Shopping Village. This confirms PG’s success in making PAMA a major destination. The company’s aim is to extend the current premises in order to increase the variety of outlets with a view to continue enhancing footfall and ensure ongoing growth at PAMA.