On 1 February, the Malta Stock Exchange (MSE) issued a notice to its members (i.e. stockbroking firms) in which it provided very valuable information regarding the indicative listing calendar for the first half of 2018.

Last September I had written an article detailing some of the different characteristics of the Main Market compared to Prospects which is a multi-lateral trading facility (MTF) operated by the MSE for debt and equity securities issued by small and medium-sized enterprises. Prospects is not a regulated market like the Main Market (sometimes referred to as the Official List). In fact, while a prospectus published by an issuer on the Main Market is regulated and approved by the Listing Authority, the admission document issued by a Prospects candidate is not approved by the MFSA’s Listing Authority.

All the seven corporate bonds are new issues and the calendar does not make reference to any roll-overs. Many bond issues in the past few years were roll-overs by existing issuers following the series of early bond redemptions (due to the common callable feature of bonds issued several years ago). However, no roll-overs are possible from non-financial companies this year since the other remaining callable bonds still in issue are due for early redemption in 2019 (Gasan Finance Company plc and Corinthia Finance plc) and in 2020 (Medserv plc).

In one of my articles published last year, I had indicated that it will be difficult to surpass the number of listings seen in 2017 (11 new issues including 5 roll-overs) since there are no roll-overs from non-financial companies. However, if these 7 possible issues are all approved by the MFSA and the companies stick to their indicative timeplan by June 2018, it will already exceed the new issuance in 2017 when six new issuers came to the market. Meanwhile, only four of the seven possible issuers for the first half of 2018 provided an indicative size of their bond issues. The new issues range from a low of €8 million to a high of €20 million. Naturally, there is no indication of the names of the issuers, the sectors in which they operate as well as the indicative interest rate being offered.

The notice to members also makes reference to the only two bond redemptions this year, namely the €55.4 million 4.8% Bank of Valletta plc bonds due to be redeemed on 27 August and the €30 million 5.9% HSBC Bank Malta plc bonds maturing on 7 October. Both banks have not yet indicated whether they will be replacing these maturing bonds with new bonds later on this year. Possibly, further information will be revealed once the banks publish their 2017 financial statements in the weeks ahead. On the one hand, one would need to consider whether BOV requires additional Tier 2 capital (subordinated bonds are classified as Tier 2 capital) following the successful €150 million rights issue last year. Another important consideration that will be contemplated by both banks is the fact that bonds of financial institutions are ranked as complex financial instruments, and under MiFID II financial services practitioners are required to assess whether the investor has the necessary knowledge, experience and understanding of the security’s features and risks to trade in that security. Should the investor be deemed to not possess the necessary knowledge and experience, the investor will only be able to subscribe for a complex instrument on an investment advisory basis. At a time when various bond issues by other companies, which would be non-complex financial instruments and therefore the application process will be much easier for retail investors, the banks would also need to consider whether there would be sufficient appetite from the retail market to ensure a successful offering.

Possibly the most interesting aspect in the listing calendar is the indication that two companies are expected to list their equity on the Official List of the MSE. In 2017, there was the first equity issue since the Tigne’ Mall IPO in March 2013. In fact, PG plc listed its 108 million shares following an offer of 27 million shares of €1.00 each by Mr Paul Gauci. The offer was hugely successful with significant demand from retail and institutional investors. In fact, the company had reported that it received applications for over €112 million. 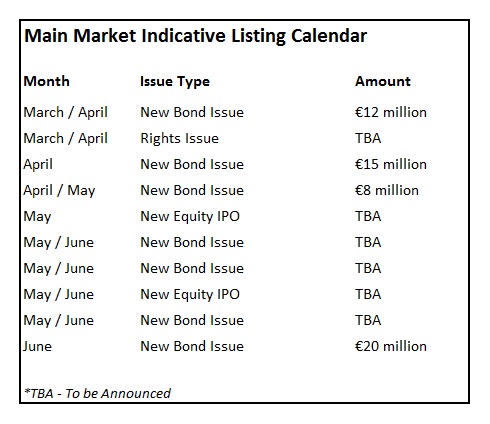 Following the enthusiasm for the PG IPO during the primary market offering and also once trading commenced on the secondary market coupled with the fiscal incentives introduced during the 2017 Budget Speech, it is encouraging that other companies are looking at an equity listing. Once again, no details have as yet emerged about the size of the offerings and the sectors in which these companies operate. Should both these issues be approved by the Listing Authority, all the details will then emerge in the prospectus that will be published by each of the companies concerned.

The calendar also mentions a rights issue planned for either March or April 2018. Last year, three companies indicated that they planned to conduct a rights issue within a short period of time, namely Bank of Valletta plc, FIMBank plc and GlobalCapital plc. In what was the largest-ever fund raising exercise in Malta, BOV successfully completed its €150 million rights issue in December 2017. Meanwhile, on 28 December 2017 GlobalCapital plc updated the market on its intention to conduct a rights issue in respect of an amount of shares not exceeding €15 million. The company explained that during Q4 2017 it continued the process of redefining its business strategy in the context of its plans to strengthen its position in the local insurance market and to passport its insurance products in other EU jurisdictions, while at the same time preparing itself for the implementation of the Insurance Distribution Directive during the course of 2018. In the light of the redefinition of the company’s business strategy, which is expected to be finalised in the first half of 2018 and which is likely to affect GlobalCapital’s optimum capital levels, the Board of Directors decided to postpone the proposed rights issue until such time as the capital plans underpinning its renewed business strategy, which is expected to be finalised in the first half of 2018, have been adequately defined taking into consideration the evolving business and regulatory environment.

As such, one expects FIMBank to detail its plans for the imminent rights issue once the 2017 financial statements are published on 13 March 2018.

2018 is likely to be another very busy year for Malta’s capital market with several new bond and equity offerings. Prospective candidates should ensure that sufficient information is not only available to the investing public at the time of the initial offering but detailed and frequent updates are issued periodically during each calendar year to assist investors and financial analysts to keep track of the evolving financial performance of each of these companies. Unfortunately most companies do not dedicate sufficient resources to investor relations which is a very important aspect once companies obtain a listing and involve various other stakeholders.