On 15 June, the Treasury announced the issuance of two new Malta Government Stocks – one maturing in 2026 (5 years) and another maturing in 2051 (30 years). This is the first time that such a long-dated bond was issued locally since in the previous case in 2015, a 25-year bond had been issued. Moreover, this was also the first time in 4 years that retail investors were allowed to participate in a new MGS offering. Since 2017, all MGS issuances were targeted at institutional investors while a series of Malta Government Savings Bonds were also offered to those investors who reached pensionable age.

A 30-year bond is an important benchmark issue across international bond markets. Therefore, having such a long-dated sovereign bond also available in Malta is a positive development for the Maltese capital market in general. Incidentally, this is also the maximum term that is covered by the quantitative easing programme of the European Central Bank.

Given that the 5-year bond was priced at a yield of just above zero percent as a result of the current interest rate environment and in line with the yields of other 5-year MGS’s already listed on the MSE, retail investors naturally directed their attention to the 30-year bond which was issued at par (100%) with a coupon of 1.8% per annum. In fact, the results and statistics published by the Treasury indicate that the take-up by the investing public was for a total of almost €16 million in the 30-year issue compared to a mere €0.11 million in the short-dated bond.

Some investors have questioned the reason behind such a low return for a 30-year bond. This must be viewed in the context of the current yield curve of MGS’s already in issue (the longest dated MGS maturing in 25 years is currently giving a yield-to-maturity of 1.5% per annum) as well as the yields of 30-year bonds of countries in the eurozone with similar credit ratings to that of Malta. In this case, the pricing mechanism adopted by the Central Bank of Malta when publishing prices of all MGS on a daily basis seems to replicate the yields on similar-rated sovereign bonds of other eurozone countries. Currently, Malta has an ‘A’ rating by all three major credit rating agencies (namely, S&P: [A-], Fitch [A+], and Moody’s [A2]) and the eurozone countries with similar ratings are Latvia, Lithuania and Slovakia. Moreover, Spain is also ‘A‘ rated by S&P and Fitch although it has a ‘Baa1’ rating from Moody’s which is equivalent to the ‘BBB+’ grading by S&P and Fitch.

A credit rating is an important factor to consider before contemplating an investment in a sovereign bond or an international corporate bond for that matter. The rating provides useful information on the sustainability of the debt and the financial soundness of an issuer. This would give added assurances to the investing public on the possibility of a country or a company defaulting on their obligations. Depending on the credit rating given, investors can distinguish between those that fall within the ‘investment grade’ category and those below investment grade which are generally known as ‘junk’ or ‘speculative’ referring to bonds with a rating of ‘BB+’ and below. The credit rating provides all the useful information required by investors to assess the ‘credit risk’ of a specific issue or issuer. Having said this however, there were instances in the past where investment grade bonds also faced sudden difficulties and defaulted. The most prominent case was that of the US investment bank Lehman Brothers in September 2008 which had an ‘A’ rating just days before collapsing.

Following the recent very disappointing news that the Financial Action Task Force placed Malta on its grey-list, some investors have also questioned how this could impact the country’s credit rating and subsequently the yields and prices of Malta Government Stocks, and therefore also the yields of local corporate bonds.

So far only one international credit rating agency provided feedback following the FATF grey-listing. FitchRatings acknowledged that the risk of reputational damage as a result of the grey-listing could reduce foreign investment, but Malta’s credit rating will not be immediately impacted. In theory, a grey-listing is considered to increase the credit risk of a country which should therefore translate into higher yields. 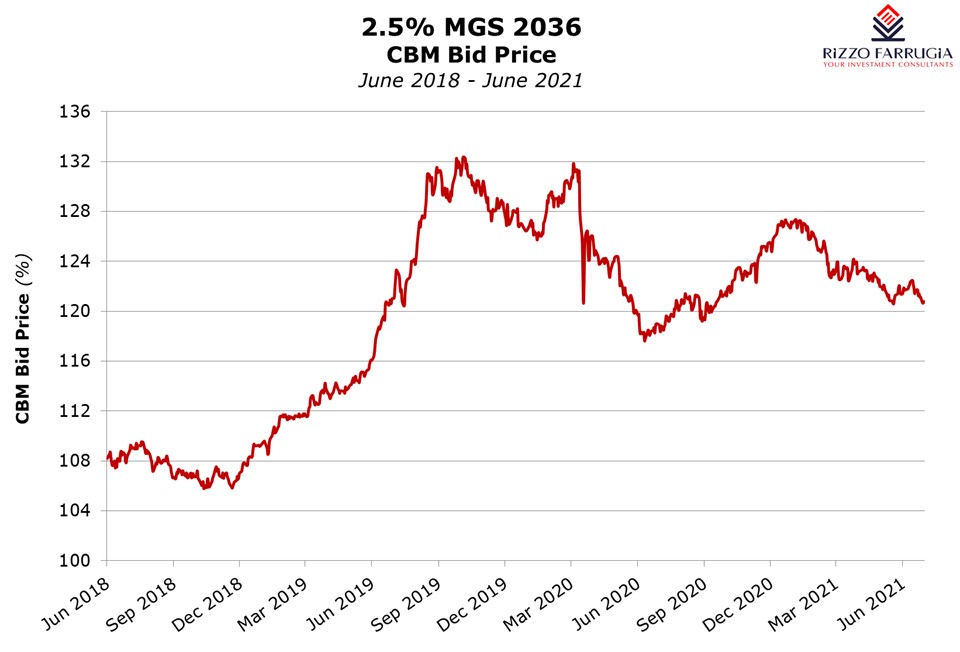 Given the inverse relationship between prices and yields, higher yields would imply a decline in prices of existing Malta Government Stocks.

This brings to light another important point which investors must not ignore especially when contemplating an investment in a 30-year bond. The price risk is an essential element of overall returns through the lifetime of such a long-term bond since many investors may be inclined or would be required to dispose of their investment prior to the maturity date. In that case, one would need to take into consideration the factors that could lead to movements in the prices of such an MGS over the long-term. Sometimes, these can be relatively volatile, as was the case in recent years especially when it came to the medium and long-term MGS’s.

One of the most topical discussions nowadays across the international financial media is the increasing level of inflation and the impact that this will have on bond yields, the fast-growing tech companies and across financial markets in general.

In view of the increased likelihood of higher levels of inflation in the years ahead compared to the subdued inflation in recent years, investors need to understand the concept of duration which represents the sensitivity of the price of a bond to changes in yields. The duration of a bond is primarily affected by its remaining coupons, the yield-to-maturity and the remaining time to maturity. The duration of a bond increases for bonds with lower coupons, lower yields and the longer the time left to maturity. Following the sharp downturn in yields in recent years (for example a 10-year MGS was giving a yield to maturity of 1.4% just three years ago compared to 0.55% nowadays), the duration has increased significantly. As such, bond investors are much more exposed to price risk now if interest rates were to rise.

There is already very clear evidence of the movement in bond prices in the eurozone and in the US as inflation expectations have changed over recent months. For example, the price of a 15-year MGS (the 2.5% MGS 2036), dropped from 127.35% in January 2021 to just above 120% now. This represents a decline of 6.4 percentage points. To put this into perspective for retail investors, the decline represents the equivalent of 3 years of interest given that this bond provides a net income of 2.125% per annum. Likewise, the longest-dated bond (the 1.4% MGS 2046 that was only available for subscription by institutional investors on the primary market) saw its price drop below par from a recent high of 104.86% as measured by the indicative prices quoted by the Central Bank of Malta.

In the US, the prices of Treasuries also performed negatively as yields surged on the news of the higher levels of inflation being evidenced. There are numerous examples of how the price declines across a number of popular investment grade bonds equates to several years’ worth of interest payments.

The evident price risk in view of the current status of the interest rate cycle is something that must not be overlooked by retail investors. Although there is a common perception among many investors that bonds represent the safer part of a balanced portfolio and are less risky than shares, bonds are not without risk especially under current circumstances when interest rates are low and inflation is on the rise.