PG plc published its April 2020 annual financial statements last week and held a virtual meeting for financial analysts providing a detailed review of the supermarkets and retail businesses as well as the Zara® and Zara Home® franchise operations.

Although the large part of the financial year was not affected by the pandemic, the impact of COVID-19 was immediately evident in the financial performance during the last two months of the year especially on the retail and catering outlets within the PAMA and PAVI shopping villages as well as the franchise operations.

In fact, PG’s Chairman Mr John Zarb immediately pointed out that sales at the Zara® and Zara Home® stores comprising the ‘franchise operations’ segment fell sharply in March at the start of COVID-19 and the outlets were subsequently closed from 23 March until 3 May in line with health authority regulations. The company calculated that it suffered an impact of €600,000 in ‘net earnings shortfall’ during the last two months of the financial year from the Zara® and Zara Home® outlets. Moreover, in view of the pandemic and the decision by the company to waive all rents to tenants for March and April at the retail and catering outlets within the PAMA and PAVI shopping complexes, this led to a €500,000 impact on rental income during the last financial year.

Despite this sizeable impact from the onset of the pandemic, PG registered a record financial performance with overall turnover rising by 11% to just under €120 million, EBITDA growing by 25% and profits after tax rising by 8% to €9.65 million.

The Chairman explained that both PAMA and PAVI outlets performed strongly notwithstanding the rental income waived in March and April totalling €500,000. Overall revenue within the supermarket and associated retail operations segment increased by 8% to €100.4 million accounting for 83.6% of overall group revenue. While revenue from the PAMA complex increased by 3%, PAVI’s revenue registered stronger growth of 16% as it continued to benefit from the extensive refurbishment carried out.

Meanwhile, revenue from the Zara® and Zara Home® franchise operations climbed by 30% to €19.6 million notwithstanding the severe impact from COVID-19 in March and April 2020. It is worth noting that the flagship Zara® and Zara Home® retail outlet in Sliema was refurbished and significantly expanded during the course of 2018 and as a result, the Sliema outlet was closed between July and November 2018. As such, the performance of this business segment for the comparable year does not reflect a full-year’s operation of the Sliema outlet. This store was enlarged in a material manner following an extensive extension thereby contributing to such a strong growth in revenue from franchise operations during the 2019/20 financial year particularly during the first ten months of the financial year before the outbreak of coronavirus.

Another important financial key performance indicator is the cash generated by the business. PG reported that net cash generated from operating activities totalled €15.5 million during the 2019/20 financial year compared to €10 million in the previous year. The strong cash flow generation was used to continue to reduce the overall level of bank borrowings as capital expenditure was relatively contained. As at 30 April 2020, PG’s outstanding bank borrowings amounted to €14.9 million compared to €22 million at the end of the previous financial year in April 2019. PG’s Chairman indicated that despite the pandemic, a further repayment of bank borrowings of between €6 million and €7 million is anticipated to take place during the current financial year.

While many investors may have expected a strong financial performance from PG during the financial year to 30 April 2020 as a result of the full-year contribution from the enlarged Zara® and Zara Home® retail outlet in Sliema and also due to the fact that the impact of COVID-19 was limited to the final two months of the financial year, the main highlight of last week’s announcement and presentation was undoubtedly related to expectations for the current financial year. 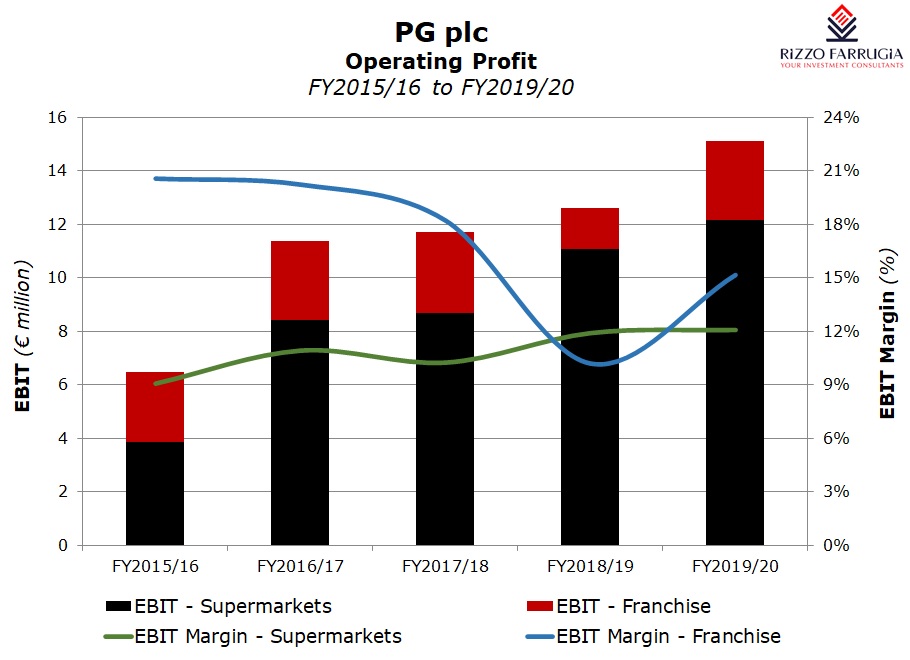 Despite the “material degree of economic uncertainty” as a result of the fluidity of the pandemic, the Annual Report states that “the group’s target for the current financial year is that of attaining a net result that is comparable to that reported for the financial year ended 30 April 2020”. Chairman John Zarb explained during last week’s presentation that management prepared a “hypothetical exercise” assuming a 3% increase in revenue from PAMA and a 5% increase in revenue from PAVI while rental income drops by 30%. Moreover, with respect to the franchise operations, it is assumed that sales will decline by 50% till August and the rate of decline will ease in the months ahead. Effectively, this would result in a reduction in PG’s profits during the first half of the year until 31 October 2020 but profits will recover in the second half as the comparative figures for the second half of the 2019/20 financial year reflect the initial impact from COVID-19 in March and April 2020. In essence, this would imply that PG is aiming to generate circa €9.6 million in net profits also for the current financial year ending 30 April 2021. Mr Zarb also indicated that during the first quarter of the 20/21 financial year which ended on 31 July, PG’s results are ahead of target.

In the Annual Report, PG’s Chairman claims that “the current economic climate may also bring investment opportunities”. In the virtual call with financial analysts, Mr Zarb explained that the company is particularly interested in pursuing growth in the supermarket and associated retail sector and there are two projects in particular which have been earmarked and a final decision will be taken at a later stage after further studies are carried out. The Chairman clarified that both are “greenfield sites” which would hence require a lead time and a certain level of investment to bring these into operation. In December 2019, PG had also indicated that intense negotiations were taking place on two potential projects. Mr Zarb clarified that one of the two projects under consideration now is also the same as that indicated some months ago.

With respect to the intention to extend the PAMA Shopping Village, the Chairman indicated that the application with the Planning Authority is progressing and a detailed Environmental Impact Assessment is being drawn up.

If the record financial performance could be sustained also this year despite the pandemic, PG could end up debt free in the next two to three years thereby providing significant financial capacity to easily take on these new projects in due course while continuing to distribute a sustainable level of dividends to shareholders. As indicated by PG during the presentation, the October 2020 interim financial statements that will be published in December should show a decline in profits and this should not alarm the investing public. Since the April financial statements are published in August, it would be useful for investors if in February 2021, PG were to consider issuing selected financial highlights for the third quarter (November to January) to enable the market to gauge progress in its financial targets for this year especially after the important Christmas season.