Half of the companies that have  their shares listed on the Regulated Market of the Malta Stock Exchange and a December financial year-end have already published their interim financial statements. The various announcements published in recent weeks and those due to be published by the deadline of end-August are very important as they enable market participants to gauge the strength of the recovery of the Maltese economy as well as the resilience being shown amid the prevailing economic uncertainties and high inflation.

Most of the companies that already published their financial statements reported strong underlying performances, and some of them even posted very encouraging growth that would have been almost unthinkable during the worst times of the pandemic. One such example is Tigné Mall plc which increased its profitability to a level that is well above the previous all-time high seen prior to the outbreak of the pandemic. Moreover, although Tigné Mall declared a record interim dividend, this only represented a payout ratio of 47% compared to the level of over 60% that used to be paid prior to 2020. This shows the extent of the increase in the company’s profitability and the robust consumption patterns especially across the retail and catering segments.

Another company which also reported a remarkable performance was GO plc as the quad play telecom operator saw its consolidated revenues increase by nearly 13% to an all-time high of just under €106 million with EBITDA surging by 18.2% to a record of €41.2 million compared to €34.8 million in the first half of 2021. Equally important was the improvement in the EBITDA margin to 38.8% compared to 38.5% in the second part of 2021 and 37.1% in the comparative period last year despite the prevailing upward pressures on costs particularly for transportation and inputs of energy or commodity-based material (such as steel and copper) which are employed extensively by GO for the maintenance and upgrade of its infrastructure.

Perhaps the biggest surprise from GO’s performance came from the Group’s operations in Malta. The local telecom arm is the core element and most mature part of the Group given the significant market share of GO in a largely saturated and highly competitive market. Against this background, it is therefore interesting to see this business segment growing its revenues by 13% to €63.7 million (representing 60% of Group revenues) particularly when considering that the forecasted growth for the full year, as provided in the Financial Analysis Summary published in May, is estimated at around 5%. The reasons for this notable increase were various, reflecting the recovery of some of the income that was lost during the pandemic (namely roaming and other international wholesale business), the higher level of sales of hardware and equipment which is a relatively volatile activity as it normally includes an element of non-recurring contracts, as well as the growth in the number of subscribers. In fact, data published  by the Malta Communications Authority three weeks ago show that compared to the position as at the end of June 2021, GO increased its mobile telephony subscribers by almost 36,000 (or +14.5%) in the nine-month period till the end of March 2022 which represents over 60% of the aggregate growth registered across the entire mobile segment. Similarly, GO also managed to expand its subscriber base for fixed broadband and pay-TV services, although such increases were much less pronounced than the growth registered in mobile telephony.

In Cyprus, GO now owns just over 70% of Cablenet Communications Systems plc following the recent further increase in the equity stake of the company. Moreover, GO has  options  to acquire the remainder of the shares in the next three years. In the first six months of 2022, Cablenet saw its revenues increase by 17.4% to €30.1 million, accounting for 28.4% of the overall revenues generated by the Group. This growth rate is in line with the projected increase of 17.8% for the full year as provided in the Financial Analysis Summary published by Cablenet in late May and indicates that the company is on track with its objectives of continuing to expand its subscriber base and network footprint, as well as make new inroads and win additional market share in the mobile segment, B2B services, and sports content. 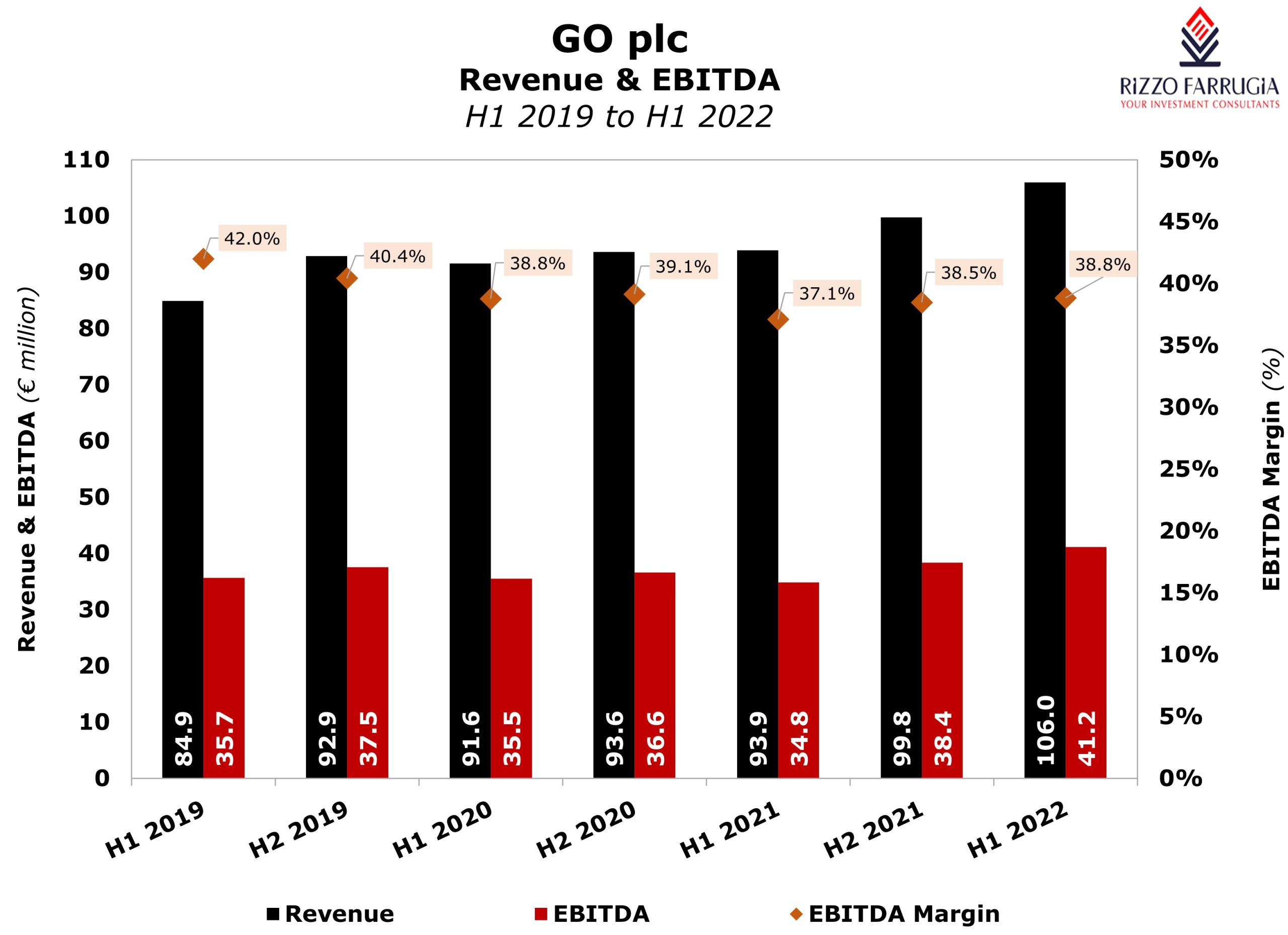 From a profitability perspective, Cablenet recorded an EBITDA of €7.2 million which is only 1.5% higher than that achieved in the first six-months of 2021. Meanwhile, the EBITDA margin dropped remarkably to 23.9% compared to 27.7% in H1 2021. In this respect, it is worth noting the considerable investment programme that Cablenet is pursuing in line with its long-term ambitious growth strategy which should also result in better margins going forward as the company achieves more scalability and economies of scale. In fact, the Financial Analysis Summary published in May shows that Cablenet is expecting EBITDA for the full year to surge by 22% to €18.6 million with the EBITDA margin improving to 29.6% from 28.5% in 2021.

The other operating arm of the GO Group is BMIT Technologies plc in which the Group has a 51% shareholding interest. The financial performance of BMIT in the first six months of this year was negatively impacted by increased technology-driven competitive pressures as well as global supply chain issues which resulted in some delays in business. Nonetheless, BMIT only recorded a marginal drop of 1.3% in revenues to €12.6 million whilst EBITDA eased by almost 5% to €5.38 million which also resulted in a contraction in the EBITDA margin to 42.5% compared to 44.2% in the first half of 2021.

Despite the minor setback, BMIT noted that it continues to secure new customers as it increases its focus on the provision of cloud and managed services in parallel to the more traditional data centre business. In fact, BMIT reiterated its objective of leveraging further its expertise in the management of mission-critical technology and infrastructure with a view of strengthening the company’s diversification plans in terms of offering, customer profile, as well as geographical presence.

As indicated in some of my articles published since the start of the COVID-19 pandemic, the performance of telecom companies over the past two years has been more resilient than others operating in more volatile economic sectors. This naturally augurs well for the continued success of the GO Group especially amid today’s highly uncertain economic and geopolitical backdrop. In fact, following the declaration of a net interim dividend of €0.07 per share and a final net dividend of €0.09 per share for the 2021 financial year, GO will now be paying another dividend of €0.06 per share which translates into a net yield of around 5% (on a 12-month trailing basis) and a payout ratio of 94.3%. This is once again testament of the Group’s robust cash flow generation capabilities and financial position which allow GO to reward its shareholders with stable and attractive cash dividends. Hopefully more companies publish equally promising financial results by the end-August deadline as these would be highly suggestive of how Maltese businesses in general are faring amid today’s challenging operating environment.