On 16 March 2017, I had written an article entitled “MGS sell-off gathers momentum” wherein I had explained how the overall downward trend in the prices of Malta Government Stocks (MGS’s) had persisted in the first few months of 2017 following the initial slump triggered by the election of Donald Trump as President of the US in early November 2016. Indeed, the Rizzo Farrugia MGS Index – which gauges the daily movements in the indicative opening bid prices of MGS’s quoted by the Central Bank of Malta (CBM) – reached a two-year low of 1,107.572 on 14 March 2017 from an all-time high of 1,182.272 points recorded on 24 October 2016 (i.e. just prior to the US election).

Bond markets were caught by surprise by the increased momentum of economic recovery within the Eurozone during the first few months of the year. In fact, during the monetary policy meeting held on 9 March 2017, the European Central Bank (ECB) increased both its growth and inflation forecasts for 2017 and also for 2018. Furthermore, during the customary press conference following the conclusion of the ECB Governing Council meeting, President Mario Draghi said that the ECB no longer had a “sense of urgency” to take further action on monetary stimulus whilst ECB policymakers “do not anticipate that it will be necessary to lower rates further”.

Despite the renewed economic confidence, euro zone sovereign yields started to reverse their previous gains (bond prices advanced) largely reflecting political uncertainty in the US whereby, during an extraordinary testimony to Congress, FBI Director James Comey confirmed that the US national security agency was investigating possible links between Trump’s electoral team and Russia. In addition, financial markets also seemed to start losing confidence in Trump’s ability to fulfil his electoral pledges which are largely based on fiscal stimulus and deregulation. In fact, during the fourth week of March, the three primary equity indices in the US – namely, the S&P 500, the Dow Jones Industrial Average and the NASDAQ – recorded their worst weekly performance in several months whilst the ten-year benchmark German Bund yield fell abruptly from a near fourteen month high of 0.51% recorded on 14 March 2017 (coinciding with the two-year low of the RF MGS Index) to a low of 0.153% on 18 April 2017 – the lowest since 3 January 2017.

Between mid-April and mid-May 2017, bond market movements were impacted by the exit polls of the French presidential election. As the polls constantly projected a resounding win for the reformist 39-year-old former economy minister Emmanuel Macron, euro zone sovereign yields started to recover (bond prices fell) amid improving sentiment that the French candidate can assist in lifting Europe towards sustained economic growth. In fact, the 10-year German Bund yield jumped back up towards the 0.50% level again, touching a high of 0.461% on 11 May 2017 from 0.153% only three weeks earlier.

Meanwhile, economic developments elsewhere continued to be largely positive. Indeed, on 19 April 2017, the IMF raised its forecasts for world GDP growth whilst China registered the sharpest Q1 GDP growth in eighteen months. Within the single currency area, GDP grew at an annualised rate of 2% in the first quarter, much better than that of the US which rose by only 0.7% – the weakest since early 2014.

The recovery in euro zone sovereign yields was short-lived as political uncertainty in the US resurfaced. After President Donald Trump threatened to shut down the American government next September as a form of retaliation to the clearance of a spending bill by Congress, on 9 May, Mr Trump abruptly fired FBI Director James Comey. Trump’s reputation took another blow after it was revealed that he reportedly met Russia’s ambassador to the US as well as the Russian foreign minister and shared highly confidential security information with them.

Political uncertainty in the UK also impacted bond market movements after Prime Minister Theresa May suffered an unexpected setback during the early general election at the start of June. The Conservative Party fell short of a majority within the House of Commons, prompting vociferous criticism towards May’s decisions including calls for her resignation and casting doubt over the smooth transition of the UK out of the EU. 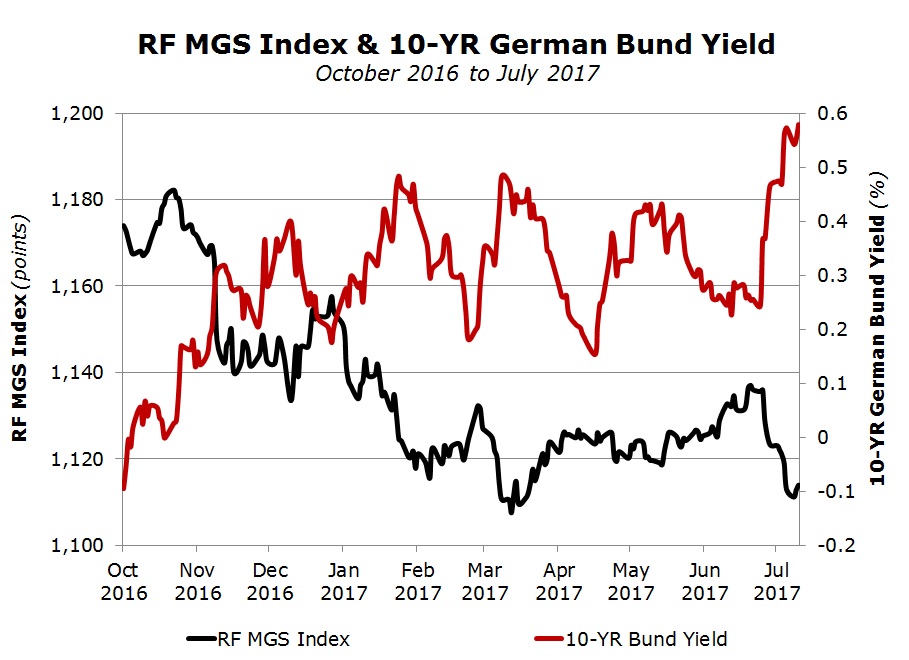 However, most of the solid gains in MGS prices registered between mid-March 2017 and the third week of June were quickly wiped out in a matter of less than three weeks. By 10 July 2017, almost all MGS’s with maturities of nine years and over slumped by more than 425 basis points. In particular, the MGS’s with maturities between thirteen and seventeen years (i.e. those bonds maturing between 2030 and 2034) dropped by more than 500 basis points.

The most recent sell-off in MGS’s reflects the latest actions taken by three of the world’s most influential central banks. In the US, despite some signs of economic growth fatigue and disappointing inflation data, the Federal Reserve lifted the range for its benchmark interest rate by a further 25 basis points (the second time this year) on 14 June 2017 to between 1% and 1.25%. The Fed maintained its outlook for a total of three rate hikes this year, largely on the back of encouraging growth in wages and an unemployment rate at its lowest level in ten years. The minutes of the monetary policy meeting held between 13 and 14 June were published on 5 July 2017 and also showed that some Federal Open Market Committee (FOMC) members warned against the dangers of letting the world’s largest economy to overheat as it could create financial stability risks.

Moreover, on 15 June 2017, the Monetary Policy Committee (MPC) of the Bank of England (BoE) left its monetary policy unchanged. However, in a significant turn of events, three MPC members surprised financial markets by voting for a rise in interest rates amid persistently higher inflation in the UK in recent months partly due to the weaker British Pound against a basket of currencies. Subsequently, BoE Governor Mark Carney also stated that a rise in interest rates in the UK was likely to be needed and that therefore this matter would be debated “in the coming months”.

However, the major influence which forced the benchmark ten-year German Bund yield to shoot to an eighteen-month high of over 0.60% was widespread concern that the ECB might tighten its monetary policy further in the coming months after reducing the size of its monthly asset-purchase programme by €20 billion to €60 billion-a-month in December 2016. The ECB’s quantitative-easing (QE) programme is currently due to end in December 2017, but some international financial commentators continued to speculate that the ECB might even consider increasing its deposit facility (which currently stands at a record low of -0.4%) before the end of its QE programme as comments made by ECB President Mario Draghi confirmed that “deflationary forces have been replaced by reflationary ones”.

On the other hand, however, the ECB President also reiterated that any change in the bank’s monetary policy would be gradual as “considerable” monetary support is still needed with core inflation remaining below the ECB target level of close but below 2%. Further comments made by the ECB chief economist Peter Praet echoed Draghi’s discretion. Mr Praet was reported as saying that the ECB needs to be patient and maintain a steady hand to its current monetary policy. He also added that a continued recovery in inflation is "crucially contingent" on low borrowing costs and, in turn, on easy monetary policy.

Meanwhile, minutes of the ECB monetary policy meeting held on 8 June published two weeks ago showed that members of the ECB Governing Council discussed the possibility of the ECB removing its long-running promise to extend, if necessary, its asset-purchase programme. Nonetheless, the Governing Council decided otherwise as “it was necessary to avoid signals that could trigger a premature tightening of financial conditions”.

The very high levels of volatility in euro zone sovereign yields, and hence in prices of MGS’s, seen in recent months is another timely reminder to local retail investors of the price risk in holding on to long-term MGS’s. It is now becoming more apparent that the end to the era of ultra-loose monetary policy worldwide is gradually taking shape. In fact, on 12 July 2017, the Bank of Canada was the first major central bank after the US Federal Reserve to raise interest rates. Meanwhile, political developments across the world also continue to play a very influential role in determining the course of movements across financial movements. As such, investors ought to be extremely vigilant of all the important developments impacting their investment portfolios. Due to these unprecedented circumstances, frequent appraisals of investment portfolios as well as a reassessment of investment objectives are crucial to ensure that investors protect their overall wealth.