In last week’s article, I explained that Maltese equity investors experienced a challenging year in 2017 as the MSE Equity Price Index declined by 2.6%. Unfortunately, investors solely exposed to Malta Government Stocks did not fare any better. In fact, the RF MGS Index lost 3%, representing its first annual decline since 2011.

When reviewing the MGS market, it is worth highlighting the developments that took place on the secondary market which contributed to the 3% decline in the RF MGS Index as well as giving an overview of the primary market issues by the Treasury of Malta.

MGS prices exhibited a very intense year of volatility during the past 12 months as market movements were influenced by the regular publication of economic data, statements by key officials of the major central banks across the world as well as global political developments.

The prices of all MGS’s ended the year lower with the exception of the three new issues launched in February 2017. During the first few weeks of 2017, the RF MGS Index slumped by 3.3% before staging a partial recovery during the last three weeks of February. However, the RF MGS Index tumbled by a further 2.2% during the first two weeks of March touching a two-year low of 1,107.572 points. It is worth recalling that at the time, two of the MGS’s had dropped well below their par value. In fact, the 2.1% MGS 2039 which had been issued only a few months before (in October 2016) at a price of 102.50% and had initially traded up to a high of 106% during the first week of November 2016 in the run-up to the US presidential election results, dropped to a low of 93.08%. Likewise, the longest-dated MGS in issue, the 2.4% MGS 2041, traded at a low of 96.25% compared to its all-time high of 111.27% only a few months earlier. This was an eye-opener for the many Maltese investors who may have always believed that MGS prices cannot trade below their par value despite the various warnings from various publications including my regular contributions on the subject matter.

The main reason for the sharp recovery in Eurozone yields (and hence the sharp decline in MGS prices) during the first quarter of 2017 was the increase in economic growth and inflation projections by the European Central Bank (ECB) in March coupled with the remarks by the President of the ECB Mr Mario Draghi that the bank no longer had a “sense of urgency” to take further action on monetary stimulus.

The wide bouts of volatility in Eurozone yields and the corresponding impact on MGS prices continued during the remainder of 2017.

During the following three months between March and June, the RF MGS Index staged a sizeable recovery of 2.7% to a 5-month high of 1,137.064 points on 22 June but within the space of less than three weeks, the benchmark index dropped back by 2.3% thereby erasing most of the gains of the previous three months. Few investors may recall that between mid-March when the RF MGS Index touched a 2-year low and the 5-month high in June, MGS prices recovered strongly with the longest dated MGS, the 2.4% MGS 2041, rallying by 673 basis points.

Initially, yields across the world began to decline between March and June as a result of political uncertainty in the US and also in the UK when Theresa May suffered an unexpected setback during the early general election at the start of June.

Later, yields across the Eurozone soared in July after important announcements by three of the most influential central banks. The Federal Reserve in the US and the Bank of England both hiked interest rates while many economists were expecting the ECB to continue to reduce the size of the quantitative easing (QE) programme after Mr Mario Draghi commented that “deflationary forces have been replaced by reflationary ones”. 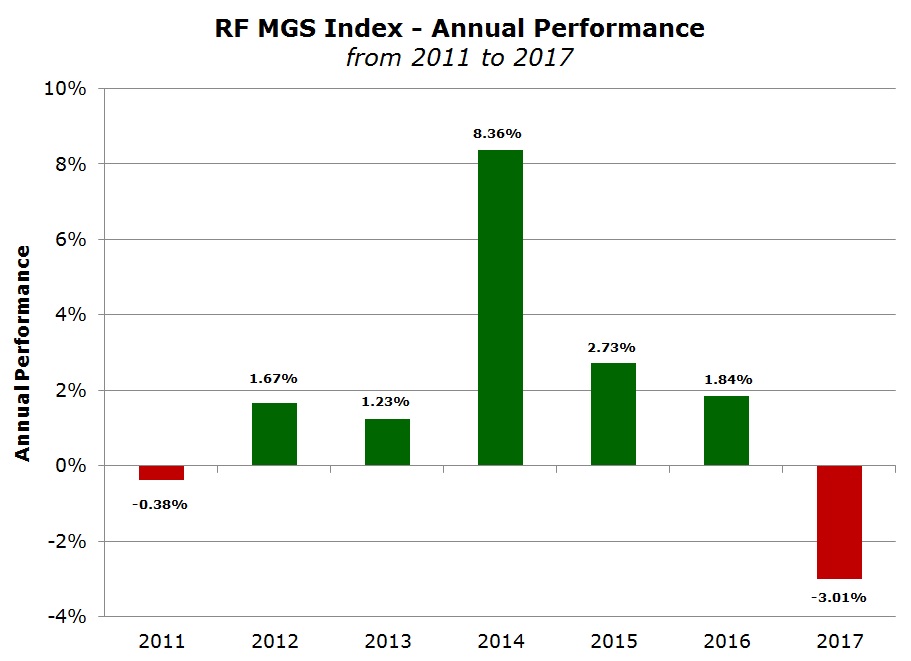 Thereafter, yields across the Eurozone and MGS prices continued to remain particularly erratic from one month to the next which may have been frustrating for those investors who had bought MGS’s to speculate on short-term capital gains and who had not previously managed to exit positions at a profit.

On the primary market, the main highlight during the year was the very weak demand exhibited by retail investors for the first MGS issue of 2017 that took place in February. Subscriptions from retail investors for the three new MGS’s issued by the Treasury of Malta amounted to a mere €19.1 million (nominal) and the total amount issued across the three MGS’s of €182.87 million was below the maximum permissible amount of €220 million. This had been the first time in a very long number of years where retail investors snubbed an MGS issue and the over-allotment option was not fully taken up by either retail investors or institutional investors. This must have been as a result of the sharp downturn in MGS prices between February 2016 and November 2017 (with two issues also dropping below par value). This development had a strong impact on retail investor sentiment as many investors had been previously subscribing for MGS’s purely for speculative reasons following the hefty gains in previous months and years.

The very weak demand for the new MGS issues had a severe repercussion on the MGS market throughout the year and in fact no new MGS issues were then launched in the traditional manner. In fact, the following MGS issue took place in August 2017 but this was only open to institutional investors who were allotted a total of €74.9 million (nominal). The Treasury of Malta then raised a total of €100 million in the 62+ Savings Bonds in August and October 2017. During the year, the Treasury raised a total of €357.8 million which is far below the amounts of previous years and also well below the maximum amount envisaged at the start of the year of €600 million. The amount raised during 2017 is just below the total of €371.8 million of MGS’s which matured during the year. Since the Government is now running a budgetary surplus rather than a deficit, this may be the start of a new trend whereby new MGS issuance will not exceed the total amount of maturing stocks in a year.

In my view, the past twelve months provided important lessons for investors on the price risk of holding very long-term MGS’s.

Investors ought to be prepared for further losses in MGS prices in the future should monetary policy normalisation by the major central banks continue to gather momentum. It is therefore very important for investors to begin to take stock of this new reality and seek professional advice in restructuring portfolios accordingly away from over-exposures to very long-term debt securities. However, investors must also be aware of the newly-introduced more complex procedures for advisory services under MiFID II which came into force on 3 January 2018.