We are just ushering in the new year and it is therefore appropriate to review the performances of different asset classes in 2019 starting off with the equity market. The Maltese equity market had a mildly positive year despite the sharp decline in recent weeks as a result of the sudden political crisis since the start of November. The MSE Equity Price Index added 4.4% boosted by a 2.2% rally during the final trading day of 2019. Meanwhile, the MSE Equity Total Return Index, which includes the dividends distributed by the various companies listed on the Malta Stock Exchange, advanced by 6.9%.

When looking at the performance of the individual constituents of the Maltese equity market, some contrasting and interesting facts emerge. Among the 24 equities listed on the Official List of the MSE, there were 12 positive performers with 6 of these companies registering double-digit gains. On the other hand, the 12 other equities performed negatively with 7 companies registering declines in excess of 10%.

Trading activity across the equity market edged marginally higher to just above €89 million despite the significant slowdown in the last two months of 2019 as a result of the political crisis which impacted investor sentiment as evidenced by the double-digit declines in 5 equities during the final quarter of the year. For the third consecutive year, activity across the equity market exceeded €85 million. Prior to 2017, the last time when equity market activity surpassed a value of €85 million was in 2006 when trading volumes had surged to an extraordinary level of €192 million.

In this week’s article I will review those companies that registered the strongest returns in 2019.

RS2 Software plc was undoubtedly the start performer of 2019 as the share price rallied by an extraordinary 72% and surpassed its previous all-time high registered in 2016. It is noteworthy that this was accompanied by an equally strong rise in trading activity in RS2 shares which surged by 90% to a value of €8.8 million. RS2 was the fourth most actively traded equity in 2019 after Bank of Valletta plc, Malta International Airport plc and GO plc. The strong increase in the share price of RS2 resulted in a surge in the company’s market capitalisation to over €400 million. RS2 now ranks as the 6th largest company on the MSE. The renewed positive sentiment towards RS2 materialised following the publication of the 2018 Annual Report on 29 April 2019 when the company detailed a number of important strategic initiatives followed by an announcement the following day of a major contract in the US with Cross River Bank which is a leading innovator and provider of banking services for financial technology companies. In the Annual Report the company confirmed that it was in the process of applying with the German regulator for a financial institution license in Germany to enable RS2 to provide acquiring services. Moreover, during the Annual General Meeting on 18 June, CEO Radi El Haj announced that the company is finalising an agreement with one of the largest acquirers in the US. The CEO also highlighted the very busy pipeline of potential business in the US and in other regions including Asia Pacific. The CEO also mentioned that RS2 was at the time in the final stages of preparation to launch transaction processing services with its alliance partner for the travel industry during the third quarter of 2019 commencing in Europe and then proceeding to Latin America. The CEO also confirmed to shareholders at the AGM that the Board of Directors was considering various options including financing arrangements to enable RS2 to expand in a more significant manner.

The strong business pipeline of RS2 was also highlighted in the interim financial report published on 29 August when RS2 claimed that it was in the process of securing a couple of significant deals in the US which were planned to be concluded before the end of 2019. RS2 published an Interim Directors Statement last week in which it gave a comprehensive account of the company’s business model and its strategic initiatives in various regions. The company confirmed that during the second half of 2019, it “executed strategic milestones to increase its customer base and diversify its businesses in Europe and globally.” With respect to the US market, RS2 highlighted that its subsidiary “now offers a global, complete and modern cloud-based processing platform” and the focus of the US subsidiary is “on filling the void created by mega-mergers” in the industry. RS2 also confirmed that it is in the final stages of signing several agreements with clients across different industries in the US.

PG plc climbed by 38.4% during 2019 lifting the market capitalisation to just under €200 million. The company reported a continued strong financial performance during the year with its interim financial statements as at 31 October 2019 published in mid-December showing a 17% increase in revenue and a growth of 28% in profits after tax as the company began to benefit from the enlarged flagship Zara® store located in Sliema. PG also maintained its semi-annual dividend distributions to shareholders in July and December and recently also indicated the expected level of the upcoming dividend due in July 2020 of at least €3 million. This would bring the total dividend distributed in respect of the 2019/20 financial year to €0.0463 per share, a consistent increase over the previous two years following the IPO in the first half of 2017. The company confirmed that it is seeking further opportunities for expansion and it is currently in intense negotiations on two potential projects in the supermarkets and associated retail business. 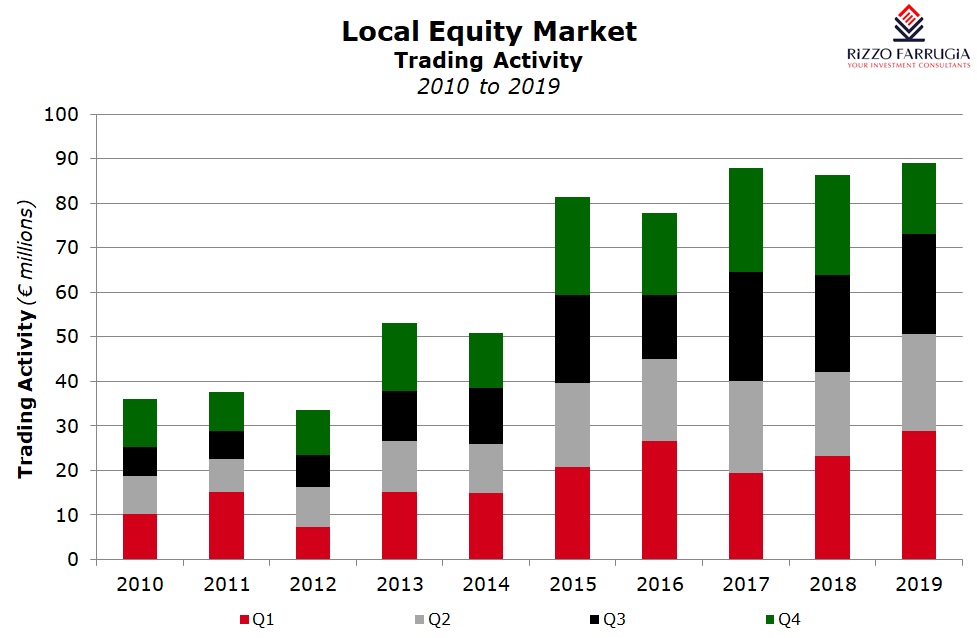 The share price of International Hotel Investments plc registered double-digit gains in each of the first two quarters of the year helping the equity rank as the best performer in the first half of 2019 with a share price appreciation of 38.7%. On 30 April, IHI had announced the payment of a further cash dividend of €0.02 per share which could have been one of the factors that helped improve investor sentiment towards the company. Moreover, In the 2018 Annual Report and during the Annual General Meeting, Chairman Mr Alfred Pisani announced that the company is considering to dispose of certain properties which may have reached “maturity in their capital gain”. The equity traded flat during the summer months as it held on to the €0.86 level but then shed more than 10% during the final quarter of the year (until the final trading day) in the midst of the unfolding political crisis in Malta. As a result of the 7.8% rally during the final day, the Q4 declined was trimmed to -3.5% with the equity closing the year with a gain of 33.9%. The sharp decline in IHI’s share price in recent weeks before the rally on the final trading day was possibly as a result of the interpretation that the political uncertainty may jeopardise the large-scale development that was being contemplated in St. George’s Bay which required approval by parliament. Meanwhile, in its Interim Directors Statement published on 5 November, IHI disclosed that a marketing exercise conducted by international brokers for the sale of the Corinthia Hotel in Prague was underway and bids were expected to be further negotiated by the end of the year. IHI’s shareholders therefore eagerly await the outcome of these negotiations to understand the value that may be raised from such a disposal and how this compares to the current valuation in the company’s financial statements.

The fourth best performing equity during 2019 was Simonds Farsons Cisk plc with a rise of 31.4%. The share price ended the year at the €11.50 level after briefly touching yet another record level of €12.60. During the 2018/19 financial year to 31 January 2019, Farsons announced that it had registered another record financial performance with a near 5% growth in pre-tax profits to €14.1 million while in the first half of the 2019/20 financial year, the Farsons Group generated pre-tax profits of €6.9 million (+5.2%). Given its obligations as a bond issuer, in July 2019 Farsons published its financial projections for the 2019/20 financial year with a forecasted pre-tax profit of €14 million. Given the actual performance in the first half of the year, it is likely that Farsons will be surpassing the financial projections disclosed in July.

Following the 23.4% increase last year, the share price of Malta International Airport plc advanced by a further 19% in 2019. This was the third consecutive year in which MIA’s share price generated double-digit gains. The continued rise in the equity of the airport operator continued to help the company consolidate its position as Malta’s largest capitalised company on the MSE. The share price reached fresh record levels regularly throughout the year peaking at €7.95 on 22 May. At this level, the market capitalisation of MIA exceeded the €1 billion level. MIA is on course to once again exceed its passenger targets established for the year. On 17 January 2019 MIA had announced that it is expecting passenger movements to increase by 5.8% during 2019 to 7.2 million while in the eleven-month period through to November 2019, a total of 6.83 million passenger movements were registered, representing an increase of 6.9% over the previous corresponding period last year.

While investors should not expect such stellar returns from these companies again in 2020, market participants will remain very attentive to upcoming announcements to analyse the financial performance and other developments that may impact the share prices of these companies during the course of 2020. In view of the sudden political crisis that hit Malta since November, it would be helpful if each of the companies listed on the MSE were to guide their shareholders as to any financial impact that they may be expecting as a result of the political developments. This will help the investing community when reviewing their investment portfolio exposures at the start of the new year.