This is the third consecutive year that the main equity benchmark index in the US generated double-digit returns. This is a rare occurrence which only happened nine times in the history of the S&P 500.

The S&P 500 has more than doubled from the low of 2,191.86 points reached on 23 March 2020 which is a remarkable milestone despite the ongoing pandemic. Most financial analysts attribute such a performance to the ample amount of liquidity provided by the abundantly aggressive monetary and fiscal policies since the start of the pandemic in early 2020.

With respect to the best performing shares within the S&P 500, there were 11 companies which registered gains in excess of 100%. The top performer was Devon Energy Corp (+180%) followed by Marathon Oil Corp (+148%). It may not be surprising that the biotech company Moderna Inc ranks as the sixth best performer in 2021 with a gain of 136% after it became one of the first companies to obtain emergency approval of its vaccine by the medical authorities in late 2020. The company was only added to the S&P 500 in July 2021. The market cap of the company had risen to almost USD200 billion in August 2021 but the share price has since dropped by 50% from its record level.

Another notable performer in 2021 was Ford Motor Company with a share price gain of 137% as the Detroit-based car manufacturer strengthened its commitment towards the EV revolution.

Since just nine companies within the entire list of 500 constituents of the main benchmark index in the US account for almost 30% of the total market capitalisation, the share price performances of these nine companies play a large part on the overall movement of the entire US equity market. These companies are Apple Inc, Microsoft Corporation, Alphabet, Amazon.com Inc, Tesla Inc, Meta Platforms Inc (previously Facebook), Nvidia Corporation and Berkshire Hathaway Inc. In 2021, the best performer among the top 9 constituents was Nvidia with an extraordinary gain of 133% as the company’s market cap surged to over USD700 billion. Alphabet’s share price rallied by 68% while Tesla and Microsoft had similar performances at just over 50%. Tesla’s market cap rose to above the USD1 trillion milestone with Microsoft rising above USD2.5 trillion as it briefly surpassed Apple as the largest publicly traded company in the US. The weakest performer among the large caps was Amazon.com with a share price gain of only 5%

At this time of the year, most financial analysts at the major US investment banks publish their predictions for the new year. Although there are mixed predictions following the spectacular rise in the S&P 500 over the past three years, there are some strategists who remain positive that the S&P 500 can continue to deliver a positive performance also in 2022.

The most bullish analyst has a 2022 target of 5,330 points for the index which represents a gain of 11% from last Tuesday’s closing level of almost 4,800 points. 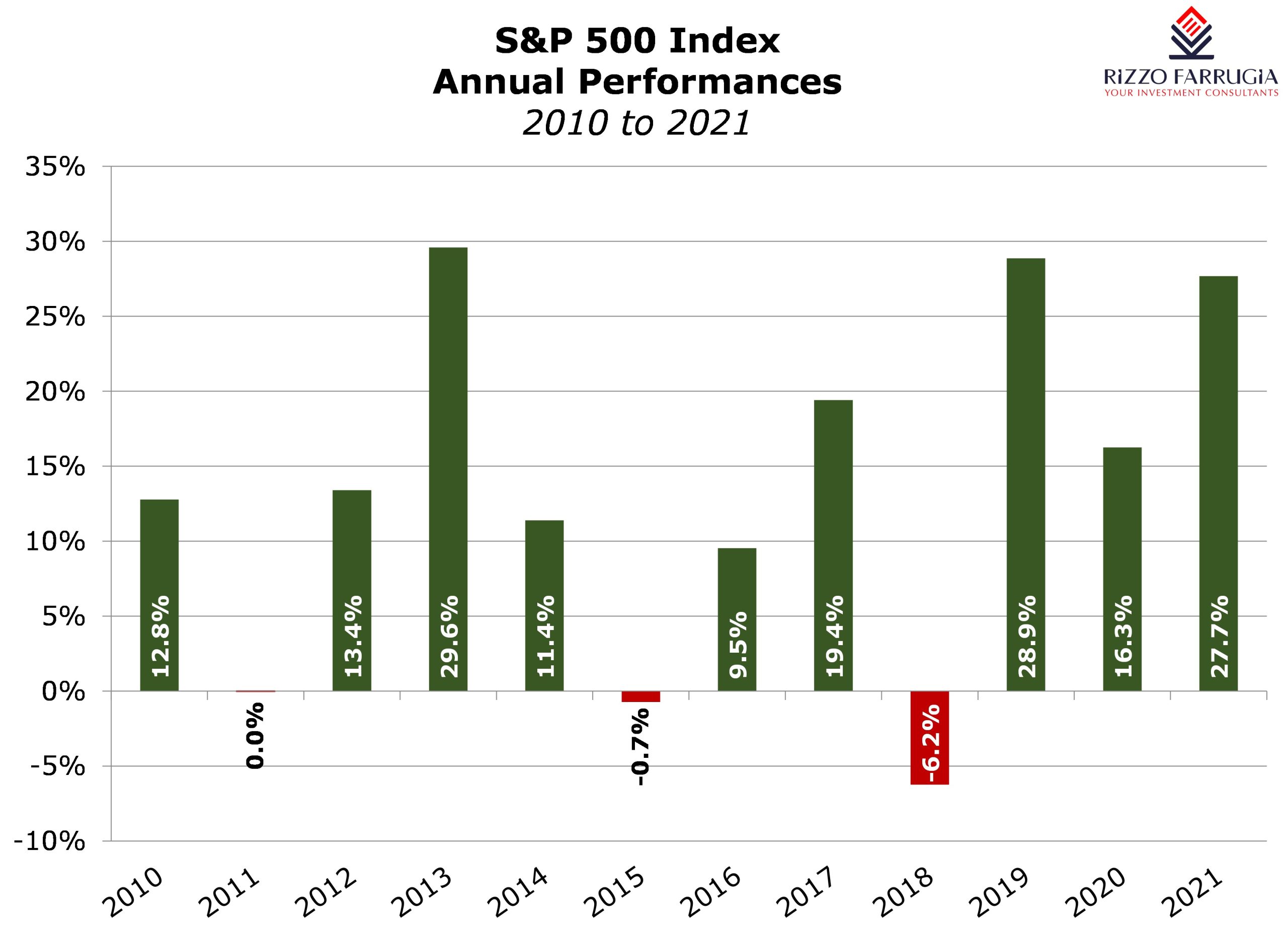 This brokerage house believes that the US economy will manage to continue its strong recovery from the COVID-19 pandemic next year amid continued success by scientists in addressing the challenges brought about by the pandemic and its variants.

Another bullish financial strategist who has a target of 5,100 points for the S&P 500 index argued that corporate earnings will continue to show strong growth also in 2022. This investment house explained that one of the main factors that helped the market to deliver such a spectacular performance in 2021 was the extent of the profit growth by the major components in the index. They believe that these companies will continue to be in a position to expand their profit margins due to strong pricing power “despite input cost pressures and supply chain challenges” that were among the major headwinds during 2021. The financial strategist also claimed that the equity market is the best asset class as a hedge against the higher levels of inflation being seen in the US and beyond.

One analyst who is widely claimed to have a very strong record in predicting market movements and who has a target of 5,050 points for the S&P 500 index believes that “2022 will be the year of a full global recovery, an end to the pandemic and a return to normal economic and market conditions prior to the COVID-19 outbreak”. This same financial strategist recently argued that if the Omicron variant proves to be less deadly, it “would fit the historical patterns of virus evolution” and could speed up the end of the pandemic which is a bullish sign for equity markets.

Although it is naturally very hard to predict what will happen during the course of the next twelve months, an increased degree of volatility is very likely to take place as experienced in recent weeks. Following the decision taken by the US Federal Reserve at its most recent meeting in mid-December that its asset purchase programme will come to an end in March 2022 and three interest rate hikes are likely during 2022, a key area of focus would be the trajectory of inflation and how such readings could alter the monetary policy decisions of the Federal Reserve. Another obvious focus would remain the outlook for the COVID-19 pandemic and how any further variants could continue to disrupt the economic recovery or on the contrary whether the effects of the pandemic begin to fade and with the successful vaccines and treatments which are now approved, COVID-19 will shift from a pandemic into an endemic as predicted by Bill Gates.