In last week’s article, I provided an overview of the earnings announcements of the five largest technology companies in the US, namely Apple, Amazon, Alphabet, Microsoft and Facebook. As I mentioned in the article, these five companies account for 22% of the total market capitalisation of the S&P 500 Index. As such, the results and share price performances of these five companies play a large part in the overall sentiment and trend across the entire US equity market.

The graph published last week depicted the strong share price performance of these 5 companies since the start of 2020 despite the sharp setback during the first quarter of 2020 as COVID-19 was declared a pandemic and equity markets tumbled rapidly.

Incidentally, early last week the S&P 500 Index crossed a major milestone as it effectively doubled from the low of 2,191.86 points reached on 23 March 2020 – the fastest doubling of the index since World War II. After having recovered strongly during the course of 2020 following the fastest 30% drop in its history between February and March 2020 and ended the year with a gain of 16.6%, the S&P 500 index continued on this positive performance in 2021 and advanced by a further 19% so far this year.

There were numerous articles published across the international media on the sectors that performed best over recent months and there was also ample debate on the different investment style to adopt, namely value investing or growth investing.

The strong upturn since the March 2020 low was effectively very broad-based across most sectors amid unprecedented monetary and fiscal stimulus along with strong corporate earnings growth and the strong vaccine rollout in many parts of the world.

Although there were sectors that clearly outperformed especially in the immediate aftermath of the start of the pandemic as most analysts and investors favoured the stay-at-home stocks, the more traditional sectors such as hospitality and travel lagged as these were clearly the most impacted by the severe restrictions adopted across the world.

An analysis of the best performers were a group of health-care and consumer discretionary companies. It may not be surprising that the stand-out performer was the biotech company Moderna Inc which was only added to the S&P 500 in July 2021. It was relatively unknown prior to the outbreak of COVID-19 but became almost a household name since mid-2020 as it clearly emerged to be one of the companies that aimed to obtain emergency approval of its vaccine by the health/medical authorities. The share price of Moderna has risen by more than 1,300% since March 2020 bringing its market capitalisation to almost USD200 billion.

Four companies forming part of the consumer discretionary sector also rank as very strong performers since the low in March 2020. Each of the share prices of these companies, namely Caesars Entertainment, Bath & Body Works, Tesla, and Penn National Gaming climbed by more than 590%.

Although the technology sector was the best performing sector in the early stages of the stunning rally in the S&P 500 since March 2020, it was not the sector that ranks as the best performer. Some investors may be surprised that the ‘materials’ sector is actually the top performer with a growth of 123% followed by technology at 120% (which however excludes Amazon, Alphabet and Facebook). The best performing company within the materials sector was Freeport-McMoRan with a gain of 583%. 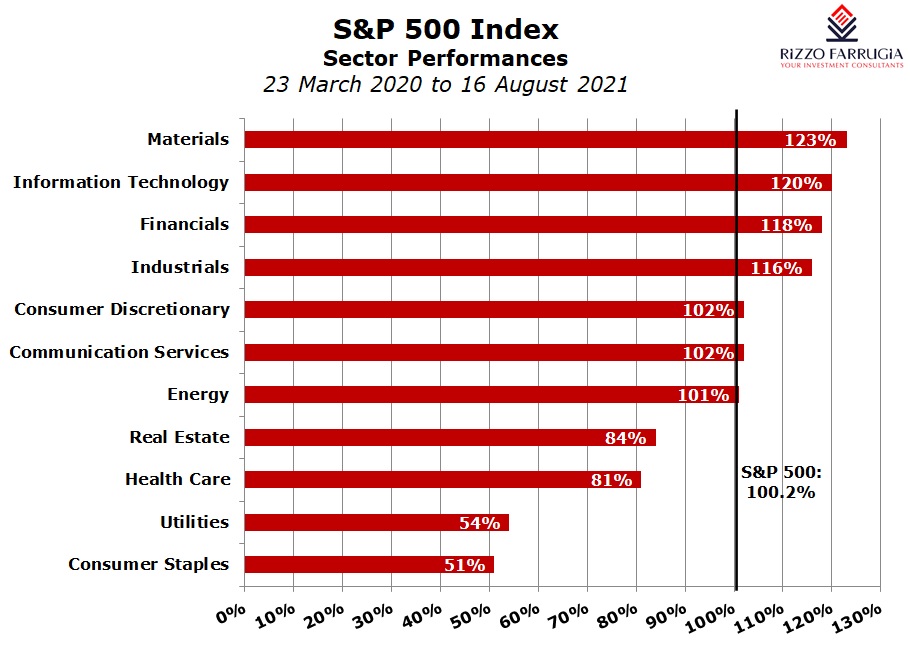 Other cyclical sectors such as energy, financials and industrials have also all doubled from their 2020 bottom on renewed optimism toward the reopening of the economy following the strict restrictions imposed in 2020.

Two other sectors that also doubled from their lows are Communication Services and Consumer Discretionary. The best performing company with the communication services sector was ViacomCBS Inc with a gain of 241% while in the consumer discretionary sector, apart from the four companies mentioned earlier on, Etsy Inc was another strong performer with a share price growth of 477%.

Following the spectacular rally over the past 18 months, various commentators are questioning the ability of the equity market to sustain the positive performance also in the months ahead amid various factors such as the ‘Delta’ Covid variant and its impact on the economic recovery, China’s tech crackdown and as the US Federal Reserve prepares to taper its asset purchase programme. In fact, following the record close early last week, the US equity markets closed lower in subsequent days and European equity markets posted their sharpest weekly decline since February 2021. Moreover, some commentators are highlighting that the valuation multiples of the equity market in general remain at historically high levels despite the strong earnings growth in recent months.

On the other hand, some financial analysts believe that despite uncertainty surrounding inflation and Covid-19 variants, the pandemic is significantly accelerating the adoption of cutting-edge technology which will boost productivity levels even further. One commentator claimed that this will usher a modern roaring 2020’s on Wall Street as the US economy is on the cusp of "economic nirvana" and in fact predicts the S&P 500 index will rise by a further 12% from current levels to 5,000 points by the end of 2022 as long as the US avoids another vast economic lockdown. In fact, this strategist also claims that bonds are not attractive at current levels since yields are expected to move higher.

In recent days, analysts at other investment banks also lifted their forecasts for the S&P 500 index following the strong financial performance of many companies in recent months. Although the path to higher levels in the S&P 500 is likely to be one with increased levels of volatility as was evident last week, some months ago legendary investor Warren Buffett again advocated the advantage of having exposure to a broad and well-diversified portfolio of the largest companies in the US as one of the best tools for retirement planning.