Last Friday marked the end of the third quarter of this year. The summer months are normally characterised by weaker trading volumes and generally subdued investor sentiment.

At the end of each quarter, it is interesting to gauge the level of activity across the local financial markets, monitor the performance across the individual components of the equity market and also highlight the main developments that took place.

Following the 1.44% increase in the MSE Equity Price Index during the first half of 2017, the Index eased by a minimal 0.08% during the summer period. However, it is very positive to note that trading activity across the equity market amounted to €24.6 million in the past three months. This was the highest level of trading activity in the third quarter since 2005. Moreover, it was the busiest quarter since the first quarter of 2016. It is worth pointing out that it was also the first full quarter with extended trading hours on the Malta Stock Exchange (MSE) and this would have helped contribute to the improved liquidity.

There were some very large trades that took place across certain equities during the past three months which contributed to this heightened activity. In fact, the equity which saw the highest level of activity was Malta International Airport plc. During the past three months, a value of over €5.1 million worth of MIA shares changed hands representing more than 20% of overall activity across the market. On 27 July, the airport operator published its interim financial statements showing a 35% increase in pre-tax profits to €17.1 million and the Directors declared an unchanged net interim dividend of €0.03 per share. More importantly, also on the same day, MIA upgraded its passenger and financial forecasts for 2017. The airport operator announced that it expects passenger movements to reach circa 5.8 million representing a growth rate of between 14% to 16% over last year’s record and a significant improvement from the original forecast of a growth of between 2% to 3% in passenger numbers to 5.2 million. MIA also revealed that its overall revenue is expected to exceed €79 million during 2017 (this would represent an increase of at least 8.1% over the 2016 figures), EBITDA is expected to rise to over €45 million (+12.5%) and net profits are anticipated to amount to over €23 million (+9.6%). MIA’s share price was one of the positive performers during the past three months with an increase of 8.4% to the €4.46 level – the highest level since early April 2016.

Possibly the most surprising revelation is that €4.7 million worth of Tigne Mall plc shares changed hands during the past three months. Following the 18% decline in the first half of the year, the share price eased by a further 2% in the summer period to the €0.96 level after recovering from a low of €0.90 which it touched in late August 2017 for the first time since August 2015.

Bank of Valletta plc consistently ranks among the most actively traded equity in Malta. This is not only since it is the largest company by market capitalisation, but it has a sizeable free float of around 60% and more importantly these shares are held between 20,000 investors. During the third quarter of the year, just over €4 million worth of shares changed hands with the share price easing by 5.1% to the €2.07 level after partially recovering from a 20-month low of €1.99 on 08 August 2017. BOV convened an Extraordinary General Meeting on 27 July to obtain shareholder approval for several items mainly related to the upcoming €150 million rights issue. Following the change in the Bank’s accounting year-end from 30 September to 31 December, BOV published extracts from its unaudited management accounts for the six-month period ended 30 June 2017 coupled with the respective comparable figures. BOV’s core profit improved by 17.6% to €60 million during the period from January to June 2017 and excluding last year’s one-off gain of €22 million related to the sale of the shareholding in VISA Europe, BOV’s pre-tax profit improved by 7.9%. In the coming weeks, BOV will be publishing its results as at 30 September 2017 while the financial statements for the fifteen-month period from 1 October 2016 to 31 December 2017 will be released in April 2018.

In terms of the best performers, Simonds Farsons Cisk plc ranks in top spot with an increase of 25% during the summer period. The equity of Farsons has been reaching new record levels on a regular basis in recent weeks possibly in anticipation of the spin-off of the company’s property-related subsidiary Trident Estates Ltd which is expected to take place by the end of the year. Last week, Farsons published its interim financial statements for the six-month period ended 31 July 2017 showing a 7.5% increase in Group turnover to €49.2 million and a profit after tax of €5.7 million (+3.9%). The Directors declared an unchanged net interim dividend of €0.0333 per share. Following the rally during the past three months, the share price of Farsons ranks in third place from a calendar year-to-date perspective with an increase of 35.7%. 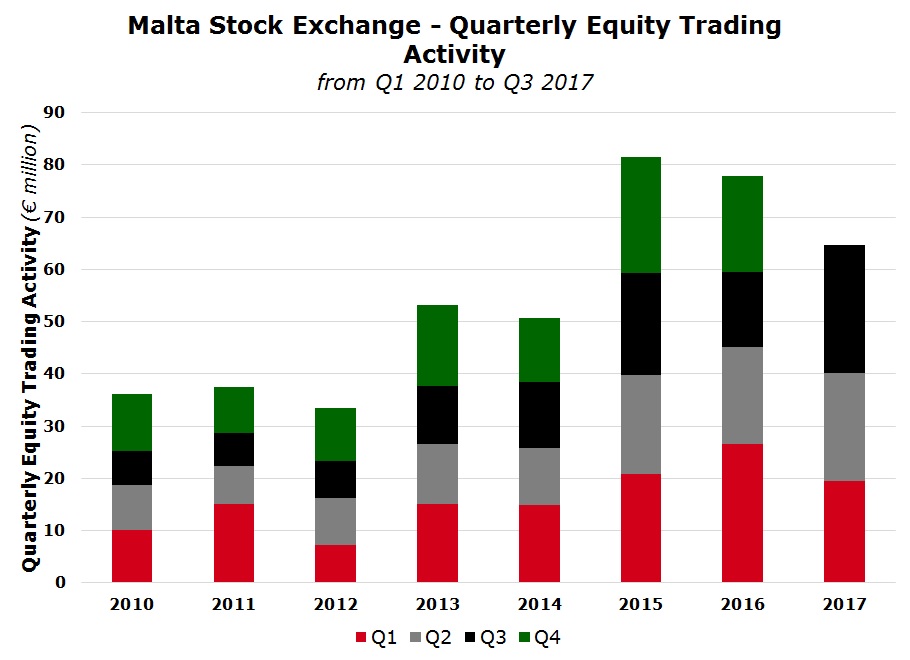 This year’s newcomer to the equity market, PG plc, was the second best performer during the past three months with an increase of 15.4% to a new record of €1.50. On 11 August, PG published its annual financial statements as at 30 April 2017. PG reported total revenue of €91.7 million during the last financial year, which is very much in line with the forecast of €91.2 million published in the Prospectus. Likewise, the gross profit of €14.3 million and EBITDA of €12.8 million is only marginally below the forecasted figures of €14.7 million and €13 million respectively.

The third best performer during the third quarter of the year was Santumas Shareholdings plc with a rise of a further 9.5% to €2.19 after hitting yet another fresh record of €2.245. It is worth recalling that the share price of Santumas had rallied by 52.5% during 2016 and 58.7% during the first half of 2017. However, although in the previous 18 months, trading activity in Santumas was very low indeed, during the past three months over €500,000 worth of shares changed hands which is significant given the small size of the company.

Among the negative performers, it is worth highlighting that all four banking equities closed the summer period lower. Apart from the 5.1% decline in the share price of BOV, HSBC Bank Malta plc experienced a decline of 5.6%, Lombard Bank Malta plc (-7%) and FIMBank plc (-7.8%). Another notable negative performer was Medserv plc with a drop of 7.7% mainly resulting from the weak financial performance during the first half of the year.

Apart from the high level of trading activity and the interim reporting season of most companies, another notable development during the third quarter was the launch of the MSE Total Return Index. I had written about the difference between the MSE Equity Price Index and the MSE Total Return Index in recent weeks. Interestingly, the performances of both indices were almost identical in the past three months possibly since few companies paid an interim dividend between 1 July and 30 September. The largest discrepancy was in the first half of the year due to the various dividends distributed after approval at the respective Annual General Meetings. In fact, the MSE Total Return Index had risen by 2.5% in the first half of 2017 compared to 1.4% for the MSE Equity Price Index.

Unfortunately, Lombard Bank Malta plc have not yet provided an update to the market on the ongoing sale of shares by the bank’s largest shareholder. The indicative timelines published earlier this year revealed that a share purchase agreement should have been signed by 24 July. After more than 2 months without any news on the current stage of the sale process, one hopes that the market will soon be updated on the progress to date and the new envisaged milestones.

During the final three months of 2017, another new equity is expected to be admitted to the Main Market. This will result from the Simonds Farsons Cisk plc spin-off of Trident Estates Limited. The other highlight of the final quarter could be one or more of the rights issues that are due from Bank of Valletta plc, FIMBank plc and GlobalCapital plc. Moreover, generally, those companies with a December year-end also publish their Interim Statements by mid-November providing an overview of the main developments since 30 June. It would be interesting to see which of these companies will make an effort to issue such important announcements to keep the market abreast of developments.