The AX Group was one of the first private companies to utilise the local capital markets with a number of its subsidiaries offering financial securities to the public since 1997.

The group has evolved markedly since then and its asset base reached €348 million in 2021. In recent years prior to the pandemic, the financial performance of the group strengthened materially mainly on account of the strong contribution from the hospitality sector which accounted for 73% of overall group turnover in the financial year ended 31 October 2019. Currently, the AX Group has three bonds in issue totalling €65 million which are due for redemption between 2024 and 2029.

AX Real Estate owns a diversified portfolio of properties which are mainly leased for the long term to the parent company AX Group plc. The properties have a total value of just over €230 million and comprise hotels and adjoining leisure/catering facilities and serviced apartments (valued at €170.9 million and representing 74% of the total value of the  property portfolio of AX Real Estate); a healthcare and retirement complex (valued at €36.9 million); residential and commercial units as well as office space (valued at €16.4 million); and industrial property that comprise nine warehouses and an adjoining office block (valued at €6.95 million). The lease agreements typically include a minimum pre-set base rent, and in the case of the hotel properties, an additional variable component is dependent on revenue targets capped at a fixed percentage of the hotels’ gross operating profit.

The new capital and debt issuance by AX Real Estate is required in order to finance two key development projects – the redevelopment and extension of the Seashells Resort and the development of the Verdala Hotel. Permits were obtained in 2021 and these projects are expected to be a major driver of the company’s future growth in the next few years.

The redevelopment and extension of the Seashells Resort represents the first phase of the master plan for upgrading the company’s foreshore properties in Qawra. The initial investment of around €52 million will add four new floors to the Seashells Resort. As a result, the hotel’s total number of rooms will increase by 166 to 618 rooms whilst there will also be the complete renovation of the property’s facilities such as pools, restaurants, and bars. In addition, the lido at the Seashells Resort will be demolished and redeveloped subject to the relevant permits being obtained from planning authorities anticipated during Q1 2022. Works on ‘Phase 1’ of the master plan commenced in November 2021 and are expected to be completed by April 2023.

The Verdala project entails the demolition of the former Grand Hotel Verdala and the construction of a new five-star 25-suite luxurious hotel. In addition, the existing 19 apartments that will lie adjacent to the hotel will be completely refurbished to the high level of finishings at par with the hotel. Works started in August 2021 and the entire project, which is estimated to cost €11.5 million, is expected to be completed by the end of 2023.

Although AX Real Estate is a relatively new company having only been established in June 2019, its main operating assets have been in existence for several years. The company’s profitability is expected to be continued to be dampened at least until FY2023/24 in view of the projected gradual recovery in tourism as well as the completion of the two major projects which the company is currently pursuing.

As such, FY2024/25 represents the benchmark year for AX Real Estate as it will include the initial twelve-month contributions from the enlarged and completely renovated Seashells Resort and the new Verdala Hotel as well as the anticipated impact of the full recovery in tourism. 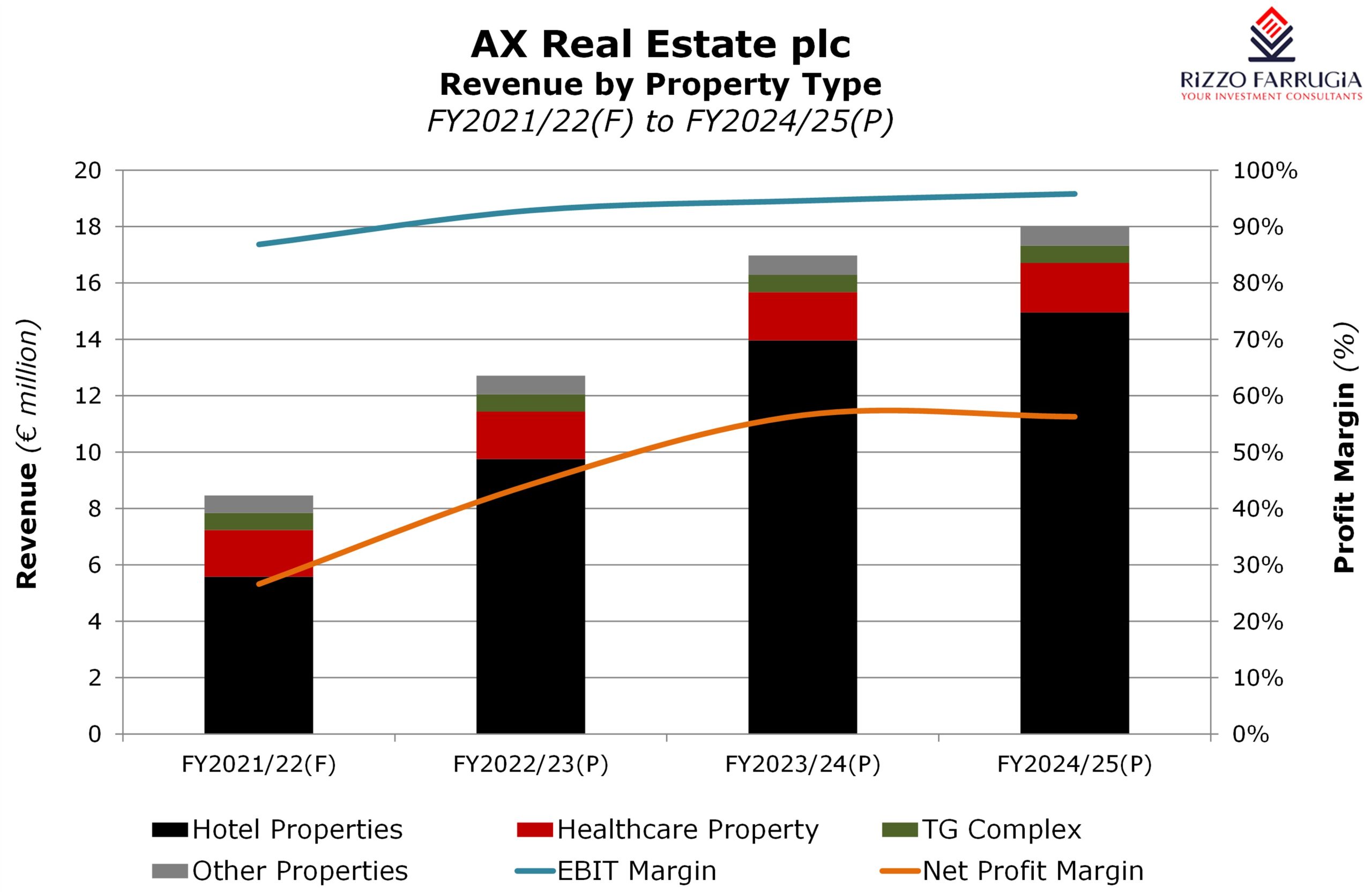 In this respect, it is important to highlight that around 78% of the projected revenues to be generated in FY2024/25 are based on pre-set minimum fixed rents and only the remaining portion of 22% (amounting to €4 million) is dependent on the hotels’ performances. In either case, it is envisaged that the hotel properties will always represent the majority of the income generated by AX Real Estate even when excluding the variable top-up rents based on the hotels’ performances. The Prospectus reveals that revenues are expected to reach €18 million by FY2024/25 which translates into a gross rental yield of 6.3% on the value of €286.1 million of investment property.

AX Real Estate aims to distribute the majority of its yearly distributable profits provided that it maintains a minimum cash reserve of €1 million. The company is committed to a minimum net dividend yield of 4% in respect of the financial years ending 31 October 2022 and 2023. Thereafter, following the completion of the Qawra and Verdala projects, the company is forecasting higher dividend yields which rise to 5.07% for FY 2024/25. Such dividends are however dependent on, amongst other factors, its profitability, debt servicing and repayments, cash flows, working capital requirements and investment commitments, as well as the prevailing market outlook at the time.

The addition of AX Real Estate to the local equity market would mark an important step for the continued evolution of the AX Group over the years as it transitions away from its private ownership structure by accepting public share ownership. Such a move is fundamental for the continued growth of the wider group given its ambitions going forward and the overall size of its upcoming investments.