Last week, shareholders of Medserv plc received the notice of the upcoming Annual General Meeting scheduled for 11 June as well as a detailed circular following the announcement on 12 April that Medserv successfully concluded a conditional agreement for the acquisition of the core businesses of Regis Holdings Limited (“Regis”).

The circular provides a lot of useful information for the Medserv shareholders who are being asked to vote on a number of resolutions on 11 June to enable Medserv to acquire the entire share capital of Regis via the allotment of new shares and also to vote on a number of amendments to the memorandum and articles of association including a change in the company name to MedservRegis plc.

The aim of today’s article is to provide a summary of the most important information found in the circular. Notwithstanding this, shareholders are still urged to review the full contents of the circular in detail and obtain professional advice in case of difficulty ahead of the AGM on 11 June.

As a start, it is important to note that Regis is a holding company whose subsidiaries provide logistics, equipment, procurement and specialised services to a wide range of customers, including national and international energy companies, drilling and mining companies as well as product and equipment manufacturers and other heavy industry-related contractors in South Africa, Mozambique, Uganda, Tanzania and Angola. In essence, the business of Regis is very similar to that of Medserv although the geographic presence is very different as Regis is mainly active in Sub-Sahara and East Africa. On the other hand, Medserv’s main markets are the Mediterranean and North Africa as well as the Middle East.

A total amount of 47,893,229 new shares will be allotted to Docob Ltd (being the company owned by the present shareholders of Regis, namely Dave O’Connor and Olivier Bernard) at a price of €0.68 per share for Medserv to acquire the various assets held by Regis. Following this allotment, Docob Ltd will own 47.12% of MedservRegis – the combined group. The agreement also stipulates that Docob Ltd have agreed to purchase a total of 2,920,588 shares from the two largest shareholders of Medserv (Anthony Diacono and Malampaya Investments Ltd) also at €0.68 per share which will result in Docob increasing its stake to 49.99% while the public free float will be reduced to 19.07% of MedservRegis (compared to a current level of 36.06%).

Moreover, the circular also contains additional information on the call option mentioned in the announcement of 12 April. It was revealed that Docob Ltd have a right to purchase (valid for 3 years) an additional amount of up to 2,540,941 shares from Anthony Diacono and Malampaya Investments Ltd at a price which would equate to a 25% discount to the ‘Equitable Price’ at the time as determined by the Listing Rules. Should this call option be exercised, Docob Ltd would then increase its shareholding from 49.99% to 52.5% which, in turn, would trigger a mandatory offer to all shareholders of MedservRegis. It is interesting that the 2.54 million shares as part of the call option represent a very small amount of the total amount of shares held by Anthony Diacono and Malampaya. In fact, Anthony Diacono and Malampaya Investments Ltd would still own 30.94% of the combined company (equivalent to circa 31.4 million shares) following the allotment of new shares to Docob Ltd and the sale of 2,920,588 shares at €0.68 per share taking place shortly once approval is obtained at the upcoming AGM.

The Shareholder Circular lists a number of risk factors which Medserv shareholders ought to consider ahead of the AGM. One of the risks highlighted is the jurisdictional risk due to the strong presence of Regis in emerging markets namely Mozambique, Angola and Uganda. In this respect, it was also correctly stated that the recent insurgency in Mozambique (which has seen major discoveries of natural gas and graphite over recent years) also had a negative impact on the business operations of Regis in Mozambique. In this respect, Medserv shareholders should consider the extent of this impact and how it could affect the overall financial position of the enlarged group.

In this context, it is noteworthy to highlight that while the circular provides some historical extracts from the financial statements of Regis, there is no clarity on the future financial performance of the Regis business units on a standalone basis, and how the different markets in which it operates will contribute to the overall performance of the new group in 2022. Although the circular indicates that the revenue from Sub-Sahara and East Africa would amount to €18.8 million in 2022 (representing 28.3% of overall projected revenue of €66.2 million), it would be useful for shareholders to have the segmental EBITDA contribution of €18.3 million for the group split by the different geographical units. In this manner, Medserv shareholders would be able to understand the extent of the expected contributions from the Regis operations especially in view of the overall loss of USD11.3 million incurred by Regis during 2020. 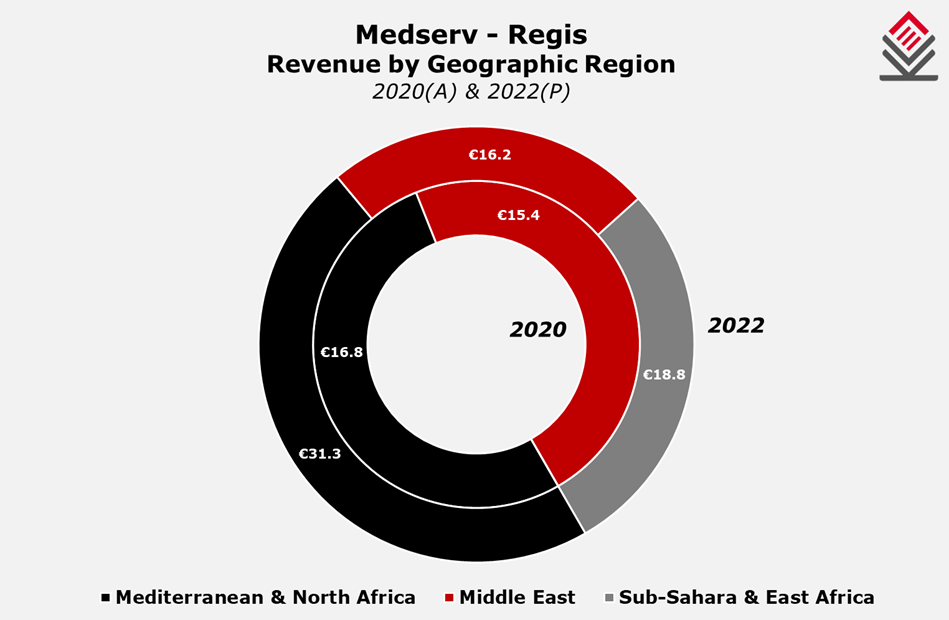 In contrast, what is immediately evident from the resultant financial position of the Medserv Group as at 30 June 2021 following the successful completion of the proposed transaction is the significant improvement in credit metrics. As a result of the strong balance sheet of Regis with a net cash position and total shareholders’ funds of USD53.2 million as at 31 December 2020 (when including all subsidiaries), the total shareholders’ funds of MedservRegis is forecasted to amount to €71.7 million as at 30 June 2021 with €31.4 million representing retained earnings. The circular indicates that total consolidated assets of MedservRegis would amount to €170 million of which €16.6 million would be in cash balances. Meanwhile, total liabilities are estimated to be €98.3 million which include €58.6 million in loans and borrowings and €23.9 million in lease liabilities. As a result, following the successful conclusion of the transaction, MedservRegis is expected to have a gearing ratio of 53.5% compared to the level of almost 95% as at end of 2020 for Medserv plc on a standalone basis, whilst the leverage ratio (calculated as total assets divided by total equity) of the combined entity will be 2.4 times compared to 28.4 times for Medserv plc as at 31 December 2020.

In 2022, being the first full year of operations of the combined group, MedservRegis is expected to register an EBITDA of €18.3 million. Accordingly, MedservRegis would have a net debt to EBITDA multiple of 3.6 times in 2022 (assuming an unchanged forecasted net debt position of €66 million as at 30 June 2021 which include lease liabilities of €23.9 million) compared to a multiple of 12.7 times for Medserv plc as at the end of 2020. Similarly, MedservRegis is anticipated to have an interest cover of 5.4 times in 2022 compared to 1.4 times for Medserv plc in 2020.

The circular also provides a breakdown of the 2021 financial performance between the first half of the year and the second six-month period following the proposed amalgamation of the two groups. During the first six months of 2021, Medserv is expected to generate an EBITDA of €4.8 million (compared to a figure of €5.57 million for the whole of 2020) and EBITDA is expected to amount to €5.8 million in the second half of the year following the proposed transaction taking place. Given the information provided, shareholders would be curious to know the contribution of the second half EBITDA from the new Regis business being incorporated into the new group.

The merger of Medserv and Regis through a share-for-share exchange provides Medserv with a number of opportunities such as access to clients in the Sub-Saharan African region whilst enabling it to diversify its present business mix. More importantly, however, the financial soundness of the combined group will be strengthened substantially as evidenced by the improved credit metrics as a result of the strong balance sheet of Regis with a net cash position and considerable retained earnings. However, the losses incurred by Regis over the past two financial years (with a loss of USD11.3 million in 2020) may be of concern to Medserv shareholders. As such, during the upcoming AGM, shareholders should rightly seek further clarifications on the turnaround plan for the combined group going forward.