The Central Bank of Malta (CBM) published the 12th edition of the Financial Stability Report (FSR) on 27 August. The lengthy study reviews and assesses the financial conditions and developments of the financial system in Malta. It evaluates the resilience of the system and identifies sources of potential systemic risk. The FSR is published in August on an annual basis followed by a mid-yearly update published in December.

Investors should be made aware of the key findings of the report on an annual basis since as the report explains, “a sound and robust financial system is the cornerstone of the national economic infrastructure as it fosters the economic growth potential of a country”.

The FSR takes on added importance this year since it also appropriately highlights that “the COVID-19 pandemic poses the biggest test to the resilience of the Maltese financial system since the Great Financial Crisis”.

Today’s article highlights a number of findings of what the CBM classifies as the ‘core domestic banks’, namely APS Bank plc, Bank of Valletta plc, BNF Bank plc, HSBC Bank Malta plc, Lombard Bank Malta plc and MeDirect Bank (Malta) plc. Four of these six core domestic banks have securities listed on the Malta Stock Exchange and therefore the investing community has access to their semi-annual financial statements via regular announcements which enable them to closely follow trends in their performance and financial strength.

In the review of the 2019 performance of the financial system, the FSR notes that the profitability of core domestic banks improved in 2019, with pre-tax profits rising by just over 20% to a combined €200 million helping the post-tax return on equity (ROE) and return on assets (ROA) increase slightly to 6.7% and 0.6% respectively, surpassing the EU averages of 5.2% and 0.4%. Despite this relative outperformance, the returns on equity generated by Maltese banks dwindled over the years. In fact, until a few years ago, as highlighted in several of my articles in the past, the ROE of most of the core banks was well in excess of 10%.

An important contributor to the improved returns of core domestic banks in 2019 was the significant decline in net impairment losses mainly reflecting lower bad debts written-off and a corresponding reversal of provisions related to these bad debts recorded in previous years. The overall non-performing loan ratio improved marginally to 3.2% in 2019 although this remained above the average of 2.7% in Q4 2019 for banks monitored by the European Banking Authority.

On the other hand, the FSR also indicates that the operational cost-to-income ratio deteriorated to 66.1% in 2019 as operating expenses increased while gross income declined marginally. This ratio is broadly in line with the EU average of 64% and reflects the highly challenging operating environment across the sector amid continuous downward pressures on income coupled with the huge requirements for local banks to continue reshaping their business and invest in new technology.

Some interesting observations emerge from the balance sheet structure of the core domestic banks.  As at the end of 2019, total assets reached 186.7% of Malta’s Gross Domestic Product (GDP). The FSR reiterated that the core domestic banks have an “abundance of liquidity” as placements with the CBM were one of the main drivers behind the growth in assets increasing to around 17% of assets.

The six core domestic banks became more focused on business activities in Malta as their foreign assets declined to just over 25% of their overall balance sheets. The majority of these foreign assets comprise investments in sovereign bonds as well as bank bonds.

Moreover, almost 90% of the loan book of core domestic banks is channelled towards residents and the increase in mortgage lending continued unabated in 2019 as it rose by 10.3%. Consequently, the share of resident mortgages increased further to 51.3% of resident loans. Although lending to construction and real estate grew by 7.6%, its share of resident lending increased marginally to 13.3%.

Another interesting observation is that the weighted average interest rate on loans fell by 0.2 percentage points to 3.6% while that of deposits remained relatively unchanged at 0.3%, thus contributing to a further contraction in interest margin. 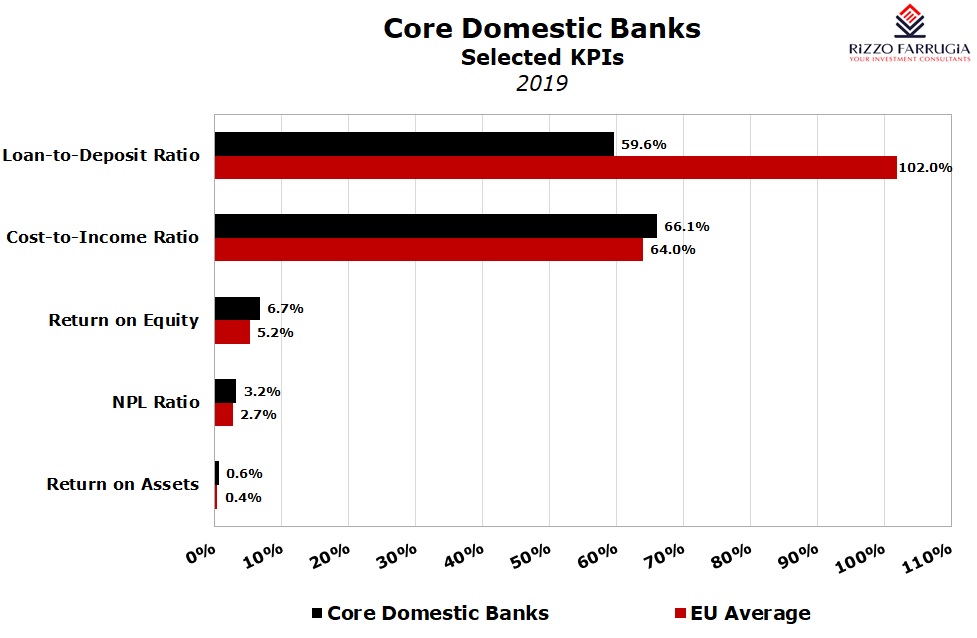 With respect to the capital base, the Tier 1 capital ratio of the core domestic banks continued to improve during 2019, rising by a further 1.4 percentage points to 17.4% as at end of 2019.

While the latest report published last month is based on the financial data for 2019, given the threat of the pandemic to several sectors of the economy and thus on the resilience of the Maltese financial system, the data for 2020 and also 2021 will be much more important to analyse. In fact, the FSR highlights a number of downside risks since the “adverse repercussions on the revenue generation of various companies” leading to an “economic shock” will result in a weakening in bank profitability “as the positive trend in asset quality observed since 2015 is likely to be reversed, with banks needing to step up further their provisioning levels”. This has already been evident in the interim financial statements published by Bank of Valletta plc, HSBC Bank Malta plc as well as MeDirect Bank (Malta) plc, and to a lesser extent, of APS Bank plc and Lombard Bank Malta plc.

Moreover, the FSR notes that “the prolonged low interest rate environment, coupled with lower fees and commission income, as well as possible higher market funding costs amid slowdown in credit, are all expected to impact the profitability of credit institutions”.

The report also indicates that the leverage of many companies is likely to rise as they will “increasingly resort to borrowing from banks or the capital market as their internal funds dry up”.

The CBM conducts regular stress tests and scenario analysis to assess the resilience of the domestic financial system to extreme shocks, under different hypothetical scenarios. In view of the COVID-19 pandemic, the CBM modified its stress testing frameworks to assess the impact of the pandemic on banks’ solvency and liquidity positions. The concluding remarks of the lengthy explanation to the stress test results indicate that “the banking system in general appears to be resilient against the contemplated scenarios”. However, the CBM warns that “the duration and extent of the pandemic remains unknown and thus any potential further deterioration in the macroeconomic environment would likely exacerbate the adverse impact on the results”.

More recently, following the publication of the Times of Malta editorial of 3 September which concluded by requesting “a reassurance that our banks will continue to be solvent”, the CBM issued a further press release referring to the conclusions of the FSR and highlighting the fact that “the resilience of the banking sector has improved and the sector entered the pandemic phase with healthy capital levels and strong liquidity" thereby providing the necessary reassurance that domestic banks are indeed solvent.

During the great financial crisis of 2008/9 when many large and well-known international banks required state bailouts to remain afloat, many observers expected Maltese banks to also require emergency funding. However, this was not needed given the prudent business model of the core domestic banks which over the years remained reliant on retail deposits for funding. Although the impact of COVID-19 on the global economy and also on Malta will possibly lead to a deeper recession than that experienced 11 years ago, and will likely have a long-lasting impact on certain sectors of the economy, it is positive to note the resilience of Maltese banks and their critical role in providing quick support and assistance to businesses. Nonetheless, the forthcoming period will indeed be crucial for the local core domestic banks to mitigate the repercussions of the economic shock. This will help to ensure the continued soundness of the Maltese financial system. Concurrently, banks need to also pursue any initiatives aimed at restoring more positive returns to shareholders.